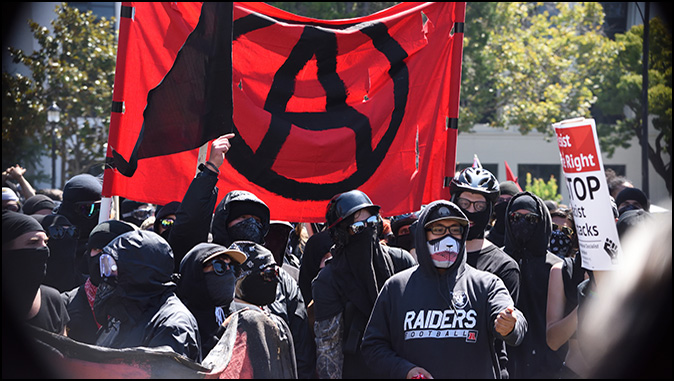 Will the Antifa 11 Face Justice in San Diego?
“Antifa is known to use force, fear, and violence.”
By Daniel Greenfield

While Jan 6 dominates the media from cable news to the press headlines, far from Washington D.C. the violence of Jan 9 recently led to the first conspiracy indictment of Antifa rioters.

The violent clashes at a Pro-Trump rally in San Diego on Jan 9, 2021 were more of what Americans had been forced to accept as the new normal over the last six years.

The fighting near Crystal Pier at Pacific Beach saw police officers being hit with rocks and glass bottles. Store windows were broken and five police officers suffered injuries in the violence.

The previous year had seen worse, but this time something was about to change.

The confrontation between Black Lives Matter and Antifa, and Trump supporters and police proved to be a catalyst for deploying a new legal strategy against the social justice riots.

In December, Antifa members were indicted on a variety of assault charges and even animal cruelty, but also, and much more importantly, on conspiracy to riot. The conspiracy charges for the first time treated Antifa as a criminal conspiracy, rather than acting as if the individual rioters had all randomly assembled to riot as previous cases against the violent leftist group had done.

Antifa and other leftist ‘brands’ have often functioned as phantom organizations with no obvious form of association beyond online coordination. That makes it difficult to accuse leftist rioters of a conspiracy. However the indictment focused on their ‘likes’ for a post calling for “direct action”.

Direct action is a euphemism for political violence.

Antifa “is known to use force, fear, and violence to further their own interests and to suppress the interests of others. This tactic is referred to as ‘Direct Action’ and is known to mean acts of violence such as assault, battery, assault with deadly weapons, arson, and vandalism,” the indictment stated.

One Antifa thug is accused of a “a confrontation with an unnamed victim as he tried to walk his dog down the boardwalk” while another sprayed an “unnamed victim and his dog with mace.”

That’s one of the 68 acts listed in the complaint.

Among the 24 counts, it claims that Luis Francisco Mora used “tear gas and a tear gas weapon against a peace officer.”

The wheels of justice grind slowly but in June a grand jury finally indicted the Antifa 11 on 29 felony counts after 13 days of testimony.

San Diego County District Attorney Summer Stephan issued a press release announcing that the acts of violence included “throwing a wooden lawn chair at a victim and striking her”.

The indictment is a triumph for Stephan who had spent well over a year pursuing her case.

DA Stephan had come under attack from the Left during her previous election for attacking her pro-crime opponent Genevieve Jones-Wright for receiving over $400,000 from a pro-crime PAC backed by George Soros. Jones-Wright has defended police defunding and wanted to let the homeless urinate in public. The Soros pro-crime candidate had called for eliminating bail, declared her support for “prison abolition” and urged that we “should be closing a prison a year”.

Had the Soros-funded candidate, who has used the hateful slogan Black Lives Matter, won, it’s unlikely that she would be prosecuting Antifa and BLM violence. And indeed, responding to the Antifa prosecution, Jones-Wright condemned it as “harming our communities with zero pushback/accountability. Shameful!” She did not clarify if she considered Antifa to be part of her “community” that was being harmed by the conspiracy charges against the leftist thugs.

But there are serious questions being raised about the complicity of the San Diego Public Defender’s office with Antifa and the wider circle of leftist radicals and backers of the movement.

One of the men indicted is Jesse Cannon, who, according to Andy Ngo, a journalist who has extensively covered Antifa, is also a rapper who goes by 420 NOiZE and has been a fixture at previous leftist confrontations. Cannon’s involvement has potentially more explosive implications because, allegedly, his girlfriend, Leah Madbak is, like Jones-Wright, a San Diego public defender.

San Diego County deputy district attorney Will Hopkins alleged that Madbak had “administrative privileges for several Antifa based social media accounts” and that the pair had “posted police reports and intentionally disseminated potentially harmful information in an attempt to dox their targets.”

The investigation found “gigabytes of data that the Antifa cells” had allegedly ”collected on their targets” including witnesses, victims, and cops.

Under these circumstances it is all the more remarkable that the case has gotten this far.

While it’s still early, the progress of the case has already exposed how the city’s public defender’s office appears to operate as an outpost of leftist insurrectionists. And it points to larger connections between the rioters and the pro-crime legal movement that is enabling them.

The systematic leftist violence of 2020, wrongly described as “mostly peaceful protests”, has gone largely unpunished. But in San Diego, there’s hope that the Antifa 11 may face justice.

And that pioneering approach to holding Antifa accountable may prove pivotal for America well beyond the precincts of Pacific Beach.