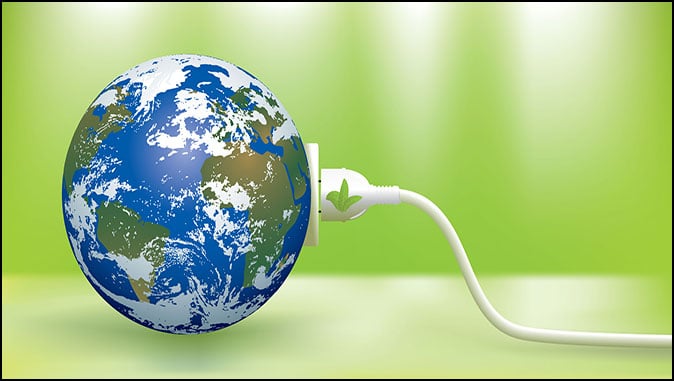 Why The Texas Blackout Has The Greens So Scared
Deflecting blame to a more exciting apocalypse.
By Rael Jean Isaac

Last month, President Biden signed a series of executive orders undermining fossil fuels, on the grounds the “climate crisis” forced his hand. “We can’t wait any longer. We see with our own eyes. We know it in our bones. It is time to act.”

Within days, most of the country was seeing “with our own eyes” and feeling “in our bones” a cold wave so severe that five million people lost electricity and, in a special irony, nearly half of the ballyhooed wind turbines in Texas, which had risen to supply 23% of her energy, were left frozen (and inoperable).

This constituted a double whammy to the huge global warming establishment. First was the cold, when the “science” had confidently predicted a steadily warming Texas. Second was the failure of renewables, vastly exacerbating the problems for the energy grid.

While the belief in man-made global warming rests on a scientific theory (rising carbon dioxide levels from burning fossil fuels will produce a large increase in water vapor, a greenhouse gas, raising the earth’s temperature), no scientific theory underpins “climate change.” The climate has shifted dramatically over time, clearly without benefit of human activity. Twenty thousand years ago, a mere moment in geologic time, what is now Chicago was buried under ice a mile thick. To pontificate about “climate change” is to give fake profundity to a silly statement of the obvious.

The wordplay was buttressed by “the science.” Apparently on the view that this gives its article double credibility, on Feb. 18 the New York Times had one of its reporters interview another of its reporters, John Schwartz, on “how to make sense of this week’s cold spell and storms.” “It does sound counter-intuitive!” Schwartz says, that the cold is actually proof of warming, but it comes down to the impact of global warming on the polar vortex. The northern latitudes are warming, which weakens the jet stream, allowing Arctic air to move southward. Schwartz admits that the role of the polar vortex is “still being debated”. Indeed it is.

The British online newspaper The Independent cites Prof. Tom Woollings, a climate scientist at the University of Oxford and author of a book on the jet stream who says “It’s an interesting idea but there’s not a lot of evidence for it.” And it quotes James Screen, an Arctic climate scientist from the University of Exeter who argues the reverse is more likely true, with Arctic warming making “cold air events” less severe.

For the global warming establishment, the disastrous performance of renewables was more upsetting than the cold spell itself. The New York Times, in a lengthy article on the Texas energy blackout (Feb. 16) simply ignored the freezing wind turbines while Bloomberg buried a mention. When other media outlets took notice, it was generally to minimize the role of the turbines in the energy shutdown, putting most of the blame anywhere and everywhere else. ERCOT, the Electric Reliability Council of Texas, responsible for managing the electric grid, weighed in to support the minimizers, putting most of the blame on gas generators.

Unsurprisingly it was the right-wing media that focused on the key role of the frozen wind turbines. The most salient coverage was provided by The Wall Street Journal’s editorial page. What happened, in the Journal’s chronicle of events, was that as temperatures in western Texas fell, causing wind turbines to freeze, wind generation plunged from providing 42% of the state’s electricity to 8%. Natural gas and coal fired plants ramped up to cover the power shortfall. But when temperatures fell still further some conventional power plants, including nuclear, started to have problems. Yet even when gas generation fell by about one-third, it was running two to three times higher than usual, nearly making up for the shortfall in wind, although not enough to cover surging demand. In short, between Feb. 8 and Feb. 16 wind power plunged 93% while coal rose 47% and gas 450% according to the U.S. Energy Information Administration (EIA). What all this demonstrates, says the Journal, is that an electricity grid that depends on unreliable wind and solar needs baseload power, especially coal and nuclear power. While natural gas is crucial it is not as reliable.

The mainstream media wanted to hear none of this. Chris Hayes, on his primetime MSNBC program, went into paroxysms of righteous indignation that anyone dare cast blame on wind turbines. He called it a “Big Lie” that “wind turbines, green energy, are the root causes of the problems in Texas right now….Republicans and right-wing media, they want to take every policy issue and turn it into some painful culture war idiocy.”

Why does the media (and entire global warming establishment) find it so important to blame global warming for the current cold spell? Why is it so important to exonerate green power for the debacle in Texas? The inhabitants of this country, from kindergarten on, are being indoctrinated to believe in the supposed existential crisis of a warming planet. Evidence that cooling means warming has to be quickly marshaled lest the public come to credit its lying eyes and, a terrifying prospect, start to question the unfalsifiable dogma it has been told is “rock solid science.” It might even ridicule the now decades old claims by climate scientists, like David Viner of the Climatic Research Unit of the University of East Anglia that snow would all but vanish in a few years.

If the public could be reassured that the cold spell was merely another manifestation of global warming, believers in the prevailing doomsday scenarios would have their faith reinforced and possible doubters derailed before their doubts crystallized.

As for deflecting blame from green power, this is a crucial moment in the battle to phase out fossil fuels. The Biden administration talks of mandating a total reliance on renewables within a few decades. The public must consider this a promising goal, offering a better life. If people decide it means unreliable energy, sitting in the cold and dark for days or weeks, energy prices through the roof (the price of gas rose by 100 times in Texas at one point), they may clamor to prevent an existential crisis around the corner in preference to avoiding one forecast in a far future by unproven computer models.

Most worrying to climate elites, people are angry. In Texas, reporters found the man in the street incredulous that in the number one energy producing state, he was not only without electricity and heat but without safe drinking water. The media, so heavily invested in global warming, recognizes it is essential that the average citizen “seeking answers” find a target for his wrath. Heaven forfend that he should blame the media, politicians, even the scientific community, for foisting man-made global warming on him, with its insistence that man must change the climate by substituting unreliable renewables for tried and true fossil fuels.

And so the media fastens on “safe” villains. It’s the state of Texas which was guilty of “systematic unpreparedness” for failing to pay power producers to hold sufficient reserves. It’s ERCOT, overseer of the electricity grid. It’s the Public Utility Commission of Texas, ERCOT’s overseer, which should have mandated suppliers better prepare for cold weather. It’s the gas companies that failed to weatherproof the pipelines. It’s anything but renewables. Indeed, CBS News went so far as to insist wind power “actually performed above expectations.” (Given the dramatic breakdown of wind power one wonders to whose expectations CBS refers and what they could have been.)

Will the media succeed in deflecting the blame, and thus any reckoning, from green power? If past is prologue, the answer is yes. Given the forces behind it, the expensive and destructive move from fossil fuels to renewables will continue. Perhaps the only hope is to deflect media attention to a new, even more exciting apocalypse. Science, the magazine par excellence of the scientific establishment, has recently published a study arguing we are overdue for a sudden collapse of the Earth’s magnetic field. This would produce a true Armageddon. And while the media happily terrify us with our approaching doom, since there’s nothing we can do about it, we could enjoy the time we have left, warmed (and in summer cooled) by a mix of reliable, inexpensive fossil fuels.