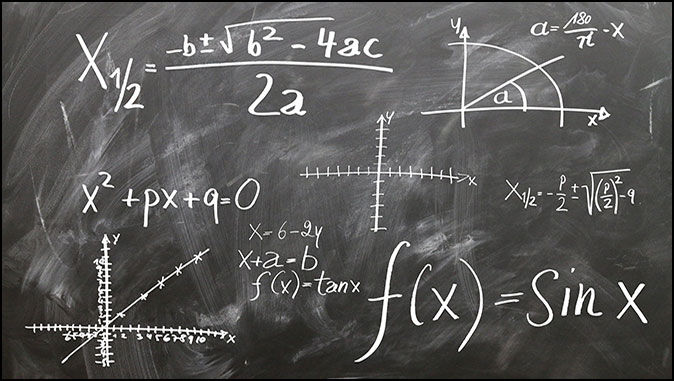 Why the Left is Afraid of Objectivity
The great struggle between truth and lies.
By Daniel Greenfield

The American Left has never been this in love with science and the class of experts who claim to dispense it. Any of its obsessions gains a glow of legitimacy when it attaches, “according to science” somewhere in the sentence, usually preceded by “do this” or “if you aren’t.”

And yet there’s a great deal of interest in science in China, but it’s on the way out in America.

STEM is on the social justice chopping block, under siege on and off campus with demands for equity and diversity, that also translate into less science and more social justice. Science is denounced by social justice squads as the work of dead white men and the new leftist ideology rejects the idea that the sum of 2 and 2 consistently add up to anything except systemic racism.

Seattle public schools contend that western math is “used to disenfranchise​ people and communities of color.” A University of Illinois education professor insisted that, “mathematics itself operates as Whiteness.”

“Our research papers turn into media releases, books and legislation that reinforce anti-Black narratives. In STEM, we create technologies that affect every part of our society and are routinely weaponized against Black people,” Shut Down STEM insisted. “The evidence of systemic racism in science permeates this nation,” Science, the journal, claimed.

The inherent problem with science is that it requires objectivity. And objectivity is the thing that leftists hate for the same reason that any cult does. Objectivity asserts that we can find the truth by stepping back from our beliefs and emotions in any field from journalism to particle physics.

The Left insists that we don’t transcend our biases through objectivity, but subjectivity.

The politically correct way to discover the truth is by understanding your white privilege and deconstructing the history of human civilization, not by searching for evidence or proof.

Truth comes not from objective facts, but from the subjective “lived experiences” of oppressed minorities whose suffering acts as the revelation of truth. This isn’t truth in the scientific sense, but in the religious sense, with minorities as martyrs revealing our sins to us with their suffering.

To be objective, lefties insist is just to deny your prejudices and evade the important work of checking your white privilege in response to the revelation of minority suffering in America.

But if objectivity is impossible, and scientific objectivity is just whiteness and colonialism, then the only legitimate science is one that asserts that leftist beliefs and values are absolutely true. The Soviet Union attempted to police science, upholding Lysenkoism because it offered a vision of science as the Communist hierarchy wanted it to be, rather than as it was, while suppressing Cybernetics because it offered a vision of reality that the Party elite found threatening.

Communist bosses liked the idea of an easily malleable agricultural system, but disliked the notion of robots replacing workers. The actual science was secondary to the ideological biases of ignorant ideologues who were convinced that they already had access to a higher truth.

The Cold War pitted Western scientific objectivity against Eastern ideological subjectivity. And objectivity won. It won to such a degree that scientists in Moscow or Shanghai don’t bother consulting ideological texts like Stalin’s articles or Mao’s sayings before doing research.

But, objectivity is dying off in the West.

Accusations of “whiteness” are to American academia what denunciations of reactionary, cosmopolitan, or idealism were to Soviet scientists. These signals serve the same function, warning scientists that they’re treading on ideologically dangerous territory by pursuing the truth.

So why does the Left claim to love science when it hates it and is threatened by it?

Marxism started out as a bastardized impersonation of a pseudo-science. Time and countless revisions hasn’t improved it any. The Left loves the idea of science, as long as it reflects its agendas, and remains subservient to its crackpot ideas. Just leave the objectivity out of it.

The same war rages in journalism.

“American view-from-nowhere, ‘objectivity’-obsessed, both-sides journalism is a failed experiment. We need to fundamentally reset the norms of our field. The old way must go. We need to rebuild our industry as one that operates from a place of moral clarity,” Wesley Lowery of the New York Times ranted.

Moral clarity is what the Communist apparatchiks also wanted. Their morality and their clarity.

Contrasting moral clarity and objectivity asserts that we can either be moral or search for the truth, but we cannot do both. Moral clarity demands unquestioning allegiance to a belief system. And that belief system must permeate whatever work we do, otherwise our work is immoral.

This quintessentially Communist idea was once relegated in America to certain cultural and academic bywaters, but is now becoming the central requirement for operating in public life.

Morality, in leftist ideology, comes from politicising everything because the central struggle of humanity, which used to be class, and is currently race, and might, tomorrow, be sexuality, pervades everything in a pseudo-religious struggle for the redemption of mankind.

To be apolitical or objective is to deny the revelation that we must all join the struggle.

What is at stake is more than abstract ideas. The legacy of the Enlightenment divided individual morality from objective truth. Morality became personal and communal, instead of collective, and those beliefs became all the more precious when confronting a universe that did not always reflect them. The reaction to that universe destroyed the faith of some and upheld the faith of others. And some of those who lost their faith used false reason to manufacture another one.

That is where the Left came from. Its ideas sought to fuse together a collective morality and reality by insisting that it had discovered the principles that would make the world into utopia.

The seduction of the pseudo-scientific and pseudo-religious cult of the Left is that it offers theocracy without god. Its followers believe that they are battling for a moral order that is absolutely true, and that submitting to that moral order will resolve the conflicts of theodicy, restoring a moral universe that accords with our moral views. This is the tragic lie of the Left.

The utopian kingdom of heaven never arrives. The worse things get, the more society has to be purged of its evil ways to atone for its social sins. Pre-revolutionary era ideology reduced social failures to a single root cause, but even once the revolution arrives and the root cause of class warfare or racism is done away with, the system begins hunting for someone else to blame.

That is what we are living through now.

In its pseudo-religious and pseudo-scientific folly, the Left believes that suffering, that of its martyrs of class or race, or of the designated oppressors, represents truth. It attacks science by insisting that the suffering of the working class or of trans people of color represents a truth beyond the flawed reasoning of the human mind to which everyone is obligated to kneel.

Truth, it tells us, comes from empathy and guilt, not from stepping away from our emotions.

How we feel about something can represent a moral truth. But what we do about it requires objective reasoning. The Left’s rejection of that reality is why it always ends up failing.

The Left exploits other people’s misery for power and ego. It doesn’t want answers. It wants to transmute idealism into hate, fear, and guilt. That’s why it hates truth. Its bastardization of religion and science is a lie and its prophets and experts never explain their failures.

Objectivity enables a moral society to solve its problems. The Left is at war with objectivity because it doesn’t want those problems solved. Objectivity would take away its power.