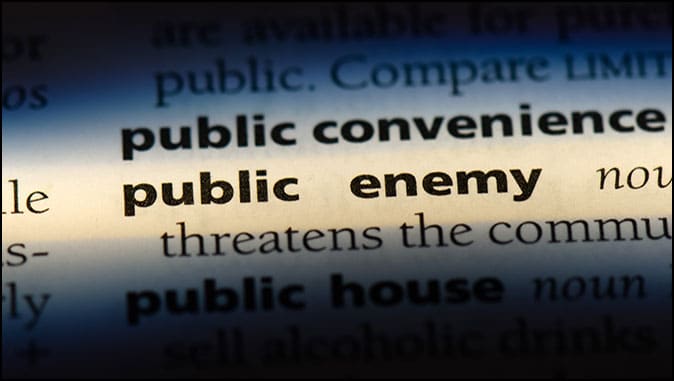 Why the Left Hates Religion
And why Christians and Jews are Public Enemy #1 for progressives.
By Don Feder

Americans remain the most religious people in the industrialized world: 87% believe in God, two-thirds say they’re Christians, and 45% attend religious services at least once a month (23% weekly).

One political party supports their worldview, the other disdains it. One views religion as an ally, the other as an adversary.

That wasn’t always the case.

Traditionally, the Democrat Party – the party of Al Smith, FDR and JFK – was at least respectful of religion. Roosevelt regularly used religious imagery to bolster morale during World War II, as he did in his famous D-Day Prayer.

The modern Democrat party – the party of Biden, Bernie and Kamala – is increasingly hostile to religion, depicting it as a force for repression and a danger to democracy.

[*] Amy Coney Barrett’s ecumenical prayer group has been called a “Christo-fascist” cult. The left is notorious for such hyperbole regarding religion. Was Nero a progressive? [*] When Barrett was up for confirmation to the U.S. Appeals Court in 2017, Sen. Dianne Feinstein charged that the “dogma lives loudly in you.” (Ideology lives loudly in Feinstein.) The Senator tried to draw a distinction between what she called the “dogma of the law” and the dogma of Barrett’s Catholic Church. Barrett patiently explained that as a judge, she’d rule on the law, not on church doctrine — although English common law has religious antecedents, going back to Sinai. [*] It’s not being a Catholic that poses a problem for the left. Biden and Pelosi pose as Catholics – you know, the pro-abortion, pro-same-sex marriage, anti-Little Sisters of the Poor Catholics. Their Catholicism is window dressing. The problem they have with Barrett is that she takes it seriously. [*] In 2012, the Democrats came close to taking an innocuous reference to God (giving working people “the chance to make the most of their God-given potential”) out of their party platform. That’s how repulsed Democrats are by expressions of faith. [*] New York Gauleiter Andrew Cuomo recently went ballistic when he saw a picture of Hassidic Jews not maintaining social distancing at a funeral (“If you’re not willing to live with these rules, then I’m going to close the synagogues,” Cuomo fumed.) Yes, My Fuhrer! The picture he saw was from 2006. But scenes of religious people doing religious things is like waving a red flag in front of progressives. [*] Earlier this month, DOJ warned the mayor of San Francisco that he could not limit church attendance to one worshipper at a time, noting that there’s no pandemic exception to the First Amendment. The city isn’t in the least concerned about multiple customers at massage and tattoo parlors. But that’s Democrats practicing their religion.

In his seminal work, The Clash of Civilization and Remaking of World Order, Samuel Huntington predicted that future wars would be between cultures, not countries.

In America, the culture war is between the left’s neo-Marxist worldview – which has come to dominate the Democrat Party — and what’s called the Judeo-Christian ethic.

Antonio Gramsci, the father of Cultural Marxism, saw faith as a firewall to the spread of communism.

In every revolution since 1789, religion has been a principal target – the French Revolution with its murder of priests and Goddess of Reason (the counterrevolution in the Vendee was inspired as much by Catholicism as royalism), the Bolshevik Revolution (which demolished churches and turned Russian Orthodoxy into an adjunct of the regime), and the 1920s anti-clericalism of Mexico’s socialist government, which sparked the Cristero War.

The clash was inevitable:

1. Judeo-Christian (or Biblical) morality teaches objective ethics — applicable for all time and in all places. Leftism teaches that morality is subjective (in a constant state of flux) and that anything can be justified if it advances the revolution.

2. Religion puts God above the state. Leftism says the regime is God – the source of all blessings.

3. Judeo-Christian ethics says the natural family is essential for social cohesion. Leftism says the family is whatever we say it is, and really not that important, anyway.

4. The Judeo-Christian worldview says God created man and woman and intended for them to complement each other. Leftism says male and female are meaningless concepts, and that to believe otherwise is bigotry.

5. Judeo-Christian morality encourages procreation as the first Commandment. Leftism says that in a world of global warming, having children is irresponsible and should be limited by law, if individual choice isn’t enough.

7. The Bible says, or at least implies, that society should be color-blind. Leftism says except for Caucasians, who must do perpetual penance for something called “white privilege.”

These principles shape the policies of two competing belief systems. More than capitalists, colonialists, warmongers and the proverbial 1%, this has made Christians and Jews Public Enemy No. 1 on the left.

This is something for the religious to bear in mind as they vote. Democrats may make rhetorical love to them now, but if they’re ever in power again, serious Catholics, Hasidic Jews, Evangelicals and Mormons will walk around with large, fluorescent targets on their backs.