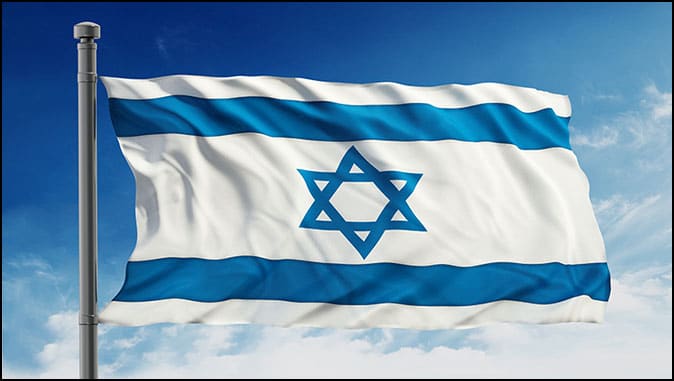 Why I’m a Zionist
It’s about history, faith and survival.
By Don Feder

I guess I’ve been a Zionist most of my life, at least since I read Leon Uris’s “Exodus” and “The Diary of Anne Frank” when I was in junior high school.

I’ve been privileged to visit Israel seven times, usually as a journalist. I’ve seen Israel from the Negev to the Galilee, from the beaches of Tel Aviv to the cobbled streets of the Old City of Jerusalem, and from the caves of Qumran to the Wall. I’ve visited Yad Vashem and seen what happens when the darkness overtakes us.

The recent stabbing of a rabbi in Boston — not far from where my family lives — and the attacks on Jews coast to coast during the latest chapter of Hamas’ holocaust-in-the-making, demonstrate that Jews still have indelible targets on their backs, and probably always will. Better to live on your feet then – well, you know the rest.

I’m a Zionist because:

1. I’m a Jew – It would have been unthinkable a generation ago, but today many Jews (almost all on the left) are no longer Zionists. Christian Zionism, which would have been an oxymoron in the past, is today very much a reality. The last time I was in Israel, I kept running into Korean kids. Finally, I worked up the courage to ask a group why they were there. They replied, quite simply, “because we’re Christians” – like, where else would we be?

But my Zionism is rooted in my Jewishness. It’s a way of keeping faith with generations of my people who kept alive the hope for the rebirth of a Jewish homeland.

Without the God of Israel and the land of Israel, Jewishness is reduced to nostalgia.

2. I’m an American – It’s more than the fact that Israel is our only real ally in the Middle East, or that the ideals on which this nation was founded come from Sinai. God promised to bless the nation which blessed the descendants of Jacob and curse the people who cursed them. At this perilous point in our history, I want the blessing for my country.

3. There must be an end to of 2,000 years of slaughter – I’m reading Michael Walsh’s “Last Stand: Why Men Fight When All is Lost.” Besides Thermopylae, the Alamo and the Siege of Khartoum, it includes Masada (73-74 BCE) and the Warsaw Ghetto Uprising (1943). There they stand like bookends on two millennia of blood-drenched history. In between, there were the massacres, pogroms, blood libels, expulsions and ghettos, leading to the gas chambers.

There has to be a refuge for a people who’ve taken it on the chin since Babylon.

Jews have been comfortable in so many lands of exile – Poland, Germany, France – only to find themselves plunged into the abyss. Theodore Herzl (the father of modern Zionism) believed in assimilation, until, as a journalist covering the Dreyfus trial, he heard Parisian mobs screaming “Death to the Jews” — in the land of liberty, equality and fraternity.

In the United States, according to the FBI, Jews (who make up 2% of the population) account for over 60% of all religion-based hate crimes.

Israel is a lifeboat in a sea whose storms never subside.

4. Israel is on the frontlines of Terrorism’s war on Western Civilization – Hamas, Hezbollah, ISIS, Al Qaeda, the Taliban, Iran … Israel’s enemies are the enemies of humanity – like the communists and Nazis. That’s no coincidence. Israel is the immediate focus but not the long-range target. Without the Jewish state, their full fury would fall on the rest of the West. It’s not just that the jihadists blame the West for Israel, but (subliminally, at least) they blame Israel for its role in creating the West.

5. Support for, or opposition to Israel has always been a litmus test – Name an enemy of Israel in the United States – Louis Farrakhan, Ilhan Omar, Bernie Sanders, Rashida Tlaib, AOC – and two things about them are readily apparent: They hate America and they’re generally loathsome human beings. Besides working to abolish Israel, Rep. Tlaib, the so-called Palestinian-American Congresswoman, wants to defund CBP, ICE and Homeland Security.

6. Anti-Zionism is Anti-Semitism, however it’s camouflaged — Martin Luther King Jr. had it right when he wrote to a student: “…You declare, my friend, that you do not hate the Jews, you are merely ‘anti-Zionist.’ And I say, let the truth ring forth from the high mountain tops, let it echo through the valleys of God’s green earth: When people criticize Zionism, they mean Jews–this is God’s own truth.”

7. Israel is the land eternally promised to the Jewish people, my people. God doesn’t change his mind. If the Bible means anything, it’s that the land of Israel was given to the Jews for all time. It’s a promise repeatedly endlessly in Scriptures. To hate the word of God is to hate God. To reject God’s promises is to reject God.

8. Lies must be exposed. The charge that Israel is a colonial exploiter is the latest in a long line of smears. How do you colonize your own country? Arab Muslims were the invaders and conquerors who swept out of the Arabian Peninsula in the 7th century killing or enslaving indigenous peoples. If Israel is an exploiter, why is the standard of living so much higher for Arabs in Jerusalem or Ramallah, than it is in Cairo or Beirut.

9. The Messiah has to have someplace to go when he comes – If not Israel, where? Newark, London, Addis Ababa, Ulan Bator? Much as we have in common (especially a moral code), there is a chasm that separates Jews and Christians. Still, we agree that Moshiach will come from the House of David and go to Jerusalem – the City of David. That can only happen if Jerusalem and Israel are Jewish.

I sit here in my comfortable home in a middle-class suburb, writing about Zionism on a computer.

And yet I feel connected to those who’ve struggled for Zion’s sake throughout the ages – men in dingy basements writing by the light of kerosene lamps, men standing watch in the desert with antiquated rifles, men on a mountain top staring down at Roman legions.

With all of them, and generations yet to come, I must keep faith.