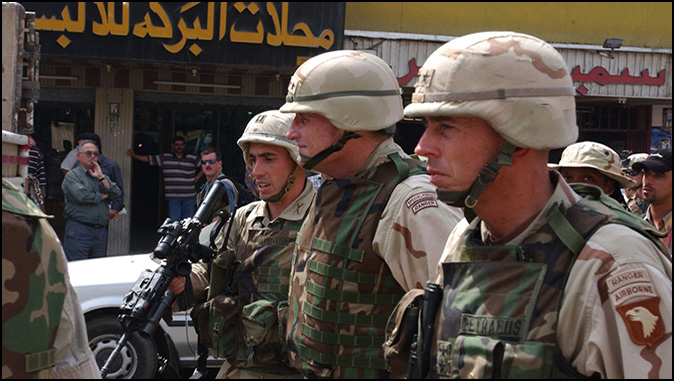 Why Aren’t Our Generals Learning?
Winning battles while losing the war has taught them nothing.
By Daniel Greenfield

A third of the way into his article, “Afghanistan Did Not Have to Turn Out This Way”, David Petraeus, former head of Central Command, who led forces in both Afghanistan and Iraq, and then headed the CIA, admits the war was never going to end.

“When we recognized that we couldn’t ‘win’ the war, we did not even seriously consider that we might just ‘manage’ it,” Petraeus complains.

Managing the war would mean a permanent military presence in Afghanistan.

There was never any serious plan to withdraw from Afghanistan. Nation building, Petraeus argues, “was not just unavoidable; it was essential”. “How else do you help build the forces and capabilities that allow you to hand off crucial tasks—such as denying sanctuary to terrorists, securing the population and infrastructure, and running the country and its myriad institutions?”

The Afghan government and its military were never meant to function independently and couldn’t. As the Special Inspector General for Afghanistan Reconstruction’s report demonstrated, the Afghan military had not been designed to work independently. When the United States and our allies withdrew, the infrastructure was gone and it collapsed.

“Forever war” gets thrown around a lot. And it’s unavoidable. The western world has been in a forever war with Islam for over a thousand years. There’s no reason to think that’s about to change except through our surrender. But did it ever make sense to turn Afghanistan into the frontier of a forever war? What Petraeus ignores is that the war quickly migrated back to its epicenter in the Middle East and the fighting followed it. Al Qaeda became irrelevant.

While Petraeus lobbied for a presence in Afghanistan, Obama’s Arab Spring poured gasoline all over the Middle East. Afghanistan became a backwater of the Global Jihad. And despite recent events, it still is. When Osama bin Laden headed to Afghanistan, there were few places in the Middle East where Islamists could safely organize, build training camps and plan a great war.

Al Qaeda turned to the outskirts, Africa and Afghanistan. These days, ISIS, Al Qaeda allies, and other Jihadists have plenty of room in Iraq, Syria, the spaces between Israel and Egypt, and Libya, not to mention much of Africa. Most importantly, they built networks in Europe and have a physical and internet presence that can recruit Islamic terrorists across America.

“Islamist extremists will seek to exploit ungoverned, or inadequately governed, spaces,” Petraeus observes. But those spaces now include European no-go zones, significant portions of the Middle East, and, at the rate we’re going, will come to include parts of the United States.

The Bush solution was to build up democratic governments as alternatives to the Islamists. Obama flipped that formula on its head by presenting Islamists as the democratic alternative. That approach led eventually to a deal with the Taliban and the collapse of Afghanistan.

But what happens in Afghanistan may matter much less than the broader scope of the war.

Petraeus warns that Afghanistan will “likely will be an incubator for Islamist extremism in the years ahead”.

True, but the country with the highest percentage of ISIS fighters was Tunisia, the vanguard of Obama’s Arab Spring. That’s followed by Saudi Arabia, Russia, Turkey, Jordan, and France. Afghanistan doesn’t even place, but America, with 150 Jihadis, is 25th, right behind Algeria.

America and Europe’s major cities have long since become incubators of what he calls “Islamic extremism”. The Jihadist imams aren’t just running mosques, they’re teaching in major universities, they’re not just recruiting in prisons, but in Congress. Qatar’s Al Jazeera isn’t just a drop box for Osama’s videos, it sets the foreign policy agenda for the entire media. And D.C.

Petraeus is still fighting yesterday’s war, because he never understood the nature of the enemy. There’s no sign that any of our blind generals can offer more than the same failed strategies.

The Afghanistan withdrawal was a disaster because it was based on a series of lies built around nation building, beginning with the idea that Afghanistan could ever function as a non-Islamist and non-terrorist state, and concluding with the bigger myth that a deal could be made with the Taliban. Diplomats try to turn military problems into political ones, but Petraeus admits that he knew better, that there could be no political solution to Afghanistan’s problems.

Hanging over all this is the shadow of the failed policies of the Cold War.

After America abandoned efforts to fight Communism at home, we did our best to fight it abroad. The Soviet Union and Communist China dragged us into brutal battles against insurgent forces into narrow theaters that drained our morale and public support for the war on Communism. It also allowed the Left to radicalize the culture and begin the takeover of the Democrats.

Islamists and their leftist allies recreated this gameplan in the aftermath of September 11. And it worked the same way. The anti-Islamist Democrat is as extinct as his anti-Communist counterpart. Public support for the War on Terror collapsed after Afghanistan and Iraq.

A smarter retired general who serves on numerous influential boards and committees might examine how it was that our enemies got us the same way twice. And how we failed to learn anything either time. But we have a distinct shortage of smart generals or leaders of any kind.

Petraeus’ arguments recapitulate familiar Cold War paradigms. He argues for sustained commitments in war theaters, bipartisan foreign policies and accepting the fallibility of allied governments. These were the arguments coined by Cold War interventionists in response to leftist anti-war movements. And they have a certain truth to them, but they’re also defeatist.

Fighting Islamic terrorist outbreaks, like Communist ones, in certain places like Afghanistan made sense, turning them into another outpost of a global cordon sanitaire is a level of imperialist ambition we cannot afford and that Petraeus isn’t even proposing. Instead he envisions that we commit to fighting in the same theater in 2022 that we did in 2002.

Even if it makes no particular sense.

The Bush administration made plenty of mistakes, but believing that we should permanently remain in Afghanistan wasn’t one of them. It was Obama who insisted on an Afghan surge. That disastrous policy was championed by men like Petraeus and it led us absolutely nowhere.

The trouble with Petraeus and so many of the generals, woke or un-woke, is that they’re McClellans, procedurally and politically competent, but lacking any larger vision of the war.

That’s why we continue to win battles while losing the war.

Almost every time Petraeus mentions the I” word, it’s paired with, “Islamist extremism” or “ultraconservative interpretations of Islam”. Like so much of his essay, it’s an outdated formulation that acts as if the central issue in a global conflict is tone rather than victory.

Winning battles while losing the war has taught them nothing except to ignore the war harder.

Our enemies are using ideology to win a war. Our generals still believe that the war can be managed if we avoid dealing with reality, the nature of the enemy, the battlefield and the fact that the trajectory of the fighting has been steadily drawing closer to our interests and to us. If we don’t find some better generals soon, they will go on managing the war while dooming us to an absolute defeat within another generation, not in Afghanistan, but here on our own soil.

Afghanistan was always going to turn out this way. The question is how will America turn out?