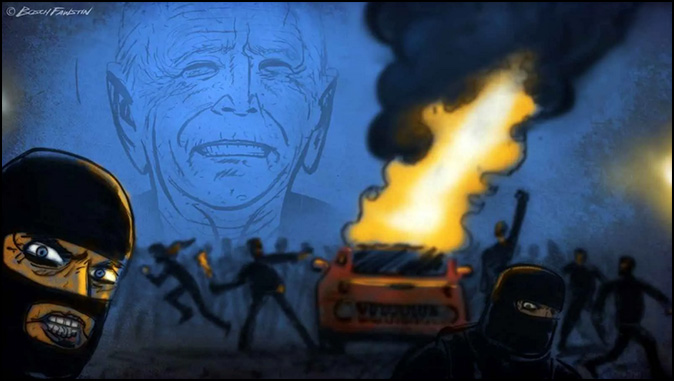 Where Are the Abortion Insurrection Hearings?
“The violence of their efforts literally shook the building.”
By Daniel Greenfield

Friday evening’s Arizona State Senate session had to be cut short as the legislative body came under siege from Abortion Insurrection rioters.

“We have a security threat outside,” Senate President Karen Fann announced. Legislators were evacuated into the basement and then had to be evacuated once again from the basement after tear gas fumes being used to stop the insurrectionists entered the building.

The Arizona Department of Public Safety reported that a pro-abortion rally by “an estimated 7,000 to 8,000 people” turned into “anarchical and criminal actions by masses of splinter groups” who “attempted to breach the doors of the Arizona Senate and force their way into the building. The violence of their efforts literally shook the building”.

The statement reported that “the glass doors bowed from attempts of forced entry” and noted damage to a variety of war memorials including those honoring murdered police officers and veterans of the Korean War and the War on Terror.

“Violent pro-abortion protester attempts of an insurrection at the Arizona State Senate were thwarted Friday night, thanks to the swift action from local and state law enforcement,” the Arizona Republican State Senate Caucus stated in its press release.

“They were aggressively banging on the windows in a way that at any moment it could break,” Senator Michelle Ugenti-Rita said. “This wasn’t a knock on a window.”

The Arizona Abortion Insurrection was one of a number of violent abortion riots around the country incited by top Democrats.

“The hell with the Supreme Court,” Rep. Maxine Waters had ranted at a rally. “We will defy them.”

In Los Angeles, an abortion insurrectionist was charged with the attempted murder of a police officer after attacking a cop with a torch, described as a “makeshift flamethrower”, and leaving him with burns.

Other abortion insurrectionists threw rocks, fireworks and bottles at police.

Rep. Alexandria Ocasio Cortez raved that the Supreme Court was “illegitimate” and urged protesters to get “into the streets”.

That’s what they did in New York City. In Manhattan, insurrections besieged conservative organizations. There was an alleged arson attempt at the Women’s National Republican Club and chants of “Burn it down” outside FOX News.

In Portland, insurrectionists threw smoke bombs at police and smashed up local businesses, as well as the Mother and Child Education Center. The pregnancy non-profit’s director denied that they were anti-abortion and described herself as a “pro-choice, liberal Catholic Democrat.”

But offering anything to children except death was enough to make Mother and Child a target.

The Abortion Insurrection in Phoenix, New York City, Portland, and Los Angeles had been incited by top Democrats, and enabled by their activist, corporate, and non-profit allies.

The Phoenix protest was allegedly linked to a branch of Radical Women, “the oldest socialist feminist group in existence,” which has ties to Trotskyists, and the Party for Socialism and Liberation, a domestic Communist party. The media promoted the rallies while failing to disclose the radical nature of the groups involved in it resulting in people bringing children to a riot.

Woke corporations, including Patagonia and Live Nation, promised to cover bail so that Woke Capitalists and Communists were working together to enable an insurrection.

But those are just the tip of the spear.

The Abortion Insurrection was carefully organized, beginning with a Supreme Court staffer feeding the original draft decision to the media. Democrat groups instantly organized a protest movement suggesting that they were likely aware of the leaked draft before it was published.

Abortion insurrectionists screamed outside the court and harassed justices in their homes so that some had to be evacuated along with their families. One insurrectionist was arrested after plotting to assassinate Justice Kavanaugh. Despite the growing violence, Speaker Pelosi and leading Democrats refused to protect the justices from their rioting leftist political allies.

A wave of terrorist attacks against pro-life pregnancy centers has been waged by a pro-abortion domestic terror group, Jane’s Revenge. It left behind graffiti warning, “If abortions aren’t safe, then you aren’t either” that has also appeared at the scene of some of the recent abortion riots.

The DOJ and the FBI appears to be doing little to follow up on the terrorism and Twitter has allowed leftists to spread a list of pregnancy centers, inciting violence under the same slogan. Senate Democrats, including Bernie Sanders and Elizabeth Warren, instead urged the FTC and Google to go after pro-life pregnancy centers for refusing to kill children.

The Abortion Insurrection has all the hallmarks of a carefully organized and directed campaign.

“We are currently there being held hostage inside the Senate building due to members of the public trying to breach our security,” Arizona State Senator Kelly Townsend had tweeted. “We smell tear gas and the children of one of the members are in the office sobbing with fear. I expect a J24 committee to be created immediately.”

She later posted a video of the rioters hammering violently on the glass doors of the building.

A J24 Committee would be able to do what the J6 Committee is claiming to do which is track how the entire insurrection was organized and financed, what the command and control operations look like, how the money is being moved around, and what connections the insurrectionists have to top Democrats, staffers, and donors. Including George Soros.

The last two decades normalized mass leftist protests and the last decade mainstreamed violent rioting. The only way to put a stop to it is by shining the clear light of day on its inner workings.

The Left has built a complicated political machine with many moving parts in which massive hijacked foundations direct money through numerous pipelines to smaller seed groups, leftist organizers moonlight as non-profit activists or fellows during the day while organizing riots at night, and meaningless names like Antifa, BLM or Jane’s Revenge are used to cover up the larger ideological organizations and operations that are running things behind the scenes.

A congressional committee empowered to investigate, compel testimony, and force the handover of information is needed to follow up on the work of conservative journalists. It is vitally important that the public understand that the violent riots in the streets are being funded by the same donors whose organizations set the political agenda for the Democrats.

The “insurrection” is coming from inside the house.

The Abortion Insurrection is the latest in a series of leftist riots being conducted by the same players using rotating pretexts. The attack on the Arizona State Senate was an attempt to intimidate and disrupt a legislative session, and to penetrate the building. It ought to be investigated and broken down as an insurrection and a component of a larger strategy.

“This wasn’t a peaceful or lawful protest,” Attorney General, Mark Brnovich said. “We must never tolerate these criminal attempts to tear down our institutions and intimidate our officials.”

Arizona officials and law enforcement suppressed the insurrection, but it’s time for Congress to step up and exposer the forces behind the domestic terror campaign that is holding not just legislators in Phoenix, but our entire nation, hostage.

IRS: Gestapo in the Making

IRS: Gestapo in the Making The police powers of the 87,000 new taxmen. By Robert…

The Hot Pagan Nights of August

The Hot Pagan Nights of August Mad dogs, Englishmen and environmentalists beat the heat. By…