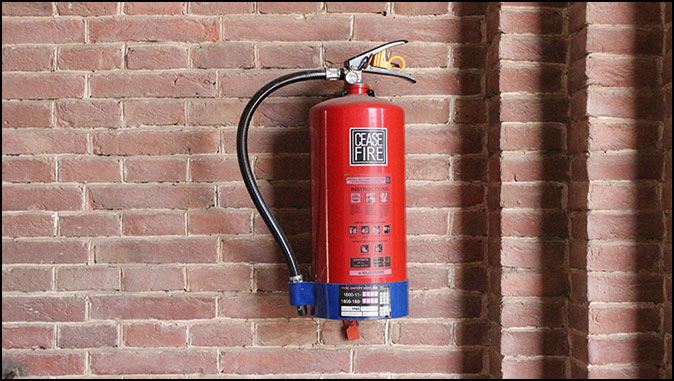 When Your House is Burning Down, Grab a Fire Extinguisher Fast
The one man who stands between us and the revolution.
By Don Feder

There is one overriding issue in this campaign. It’s not abortion, immigration or judicial nominations, as important as they are.

​When your house is on fire, don’t make plans to redecorate. There’s a fire raging in America which could consume our country. This isn’t hyperbole. It’s reality. If the revolutionaries seize control, nothing else will matter in the long run.

​We’ve seen it time and again. We saw it in the streets of Paris in 1789, in Moscow in 1917 and in Germany the early 1930s – the marches and sloganeering, the rage, the murderous violence, the attacks on authority, the chaos, and the insistence that only a revolutionary vanguard understood the will of the people.

​The enemy was aristocratic privilege, or an antiquated monarchy, or “capitalist exploitation” or the Jews. This time, it’s carefully orchestrated charges of institutional racism, police brutality, and an unjust economic system.

​We used to say it can’t happen here. That’s what some Germans told themselves during the Weimar years. How could a country so educated, so cultured — the center of scientific research and medical advancement — elect a gang of murderous cretins? They did.

In the 18th century, France epitomized refinement in art, architecture and literature. French was the language of most European courts, the language of diplomacy. Then came the guillotine.

We pioneered representative government and civil liberties. Our Constitution was a model for developing nations the world over. We survived a Civil War, the Great Depression, two World Wars, and the upheaval of the 1960s. We told ourselves we were the last remaining superpower, and other comforting cliches. But civilization is never assured. The barbarians are always at the gates.

It’s not just the anarchy in our streets, but chaos with a purpose — chaos that’s been carefully cultivated.

• Antifa and Black Lives Matter are the salt and pepper of the demolition squad. BLM’s founders describe themselves as “trained Marxists.” Antifa follows the communist playbook by calling everyone who opposes them “fascists.”

• Playing on racial guilt, Black Lives Matter is funded by major corporations – including Microsoft, Amazon, IBM, Uber and Grubhub.Lenin said, “Capitalists will sell us the rope with which we will hang them.” Eager to prove their progressive credentials, corporations are giving away the rope.

• In Portland, Seattle, Chicago and New York, Democratic mayors have refused to put down the insurrection, even after months of rioting and property damage in excess of $1 billion (in 130 cities) – even when businesses are fleeing and their tax base is shrinking. By September 4, Portland had endured 100 nights of rioting. To celebrate Indigenous People’s (anti-Columbus)Day, revolutionaries demolished statues of Abraham Lincoln and Theodore Roosevelt and ransacked the Oregon Historical Society. During the Summer, Mayor Ted Wheeler said he was waiting for the riots to burn themselves out. How’s that working?

• Prosecutors bought and paid for by George Soros refuse to prosecute rioters. The police (who are resigning or taking early retirement in record numbers) throw up their hands in disgust. In the NYPD, retirements are up 87% over 2019.

• The Democratic Party has become the cheering section for the revolution. In June, North Carolina Governor Roy Cooper said, “People are more important than property. Black Lives Do Matter.” In other words, you can burn our cities to the ground and we won’t do a damn thing about it. Massachusetts Attorney General Maura Healey exultantly proclaimed: “Yes, America is burning, but that’s how forests grow.” Staffers on the Biden and Harris campaigns have donated to bail funds for the rioters.

• Biden ignored the violence for three months. When he was finally forced to say something (on August 30), his disavowal was weak and equivocal. It included police “violence” and mythical right-wing militias, but no mention of Antifa and BLM. Ever helpful, Two-Gun Joe recently suggested that when their life is at stake, police should stop the use of deadly force against them by shooting suspects in the leg.

• Now there’s an online manual (ShutDownDC) for “disrupting the country” if Trump wins.

A Biden victory will be the revolution in power – like Hindenburg appointing Hitler after the Nationalist Socialists won a plurality in the 1932 election.

Antifa and BLM will make the transition from brown shirts to Schutzstaffel – a paramilitary force used to terrorize opponents of the regime.

Under a creature like Andrew Cuomo, the Justice Department will be used to probe and prosecute police on suspicion of doing their job, to intimidate them into compliance. As Governor, Cuomo said there was no place in New York for conservatives. As AG, they’ll be no place for conservatives in America.

Under Chief Justice Hillary Clinton, an expanded Supreme Court will provide a veneer of constitutionality to the regime’s depredations, including confiscation of civilian firearms.

Shortly after his inauguration, the 25th Amendment will be invoked and Biden will be removed for mental incapacity, whereupon Kamala Harris will become the president from the 9th Circle of Hell.

There will be a modern equivalent of the Reichstag fire that the regime will use to consolidate its power and demonize everyone on the right. After D.C. and Puerto Rico become states, and millions here illegally are amnestied and made citizens, future elections will be a sham.

There is one man that stands between us and the triumph of the revolution.