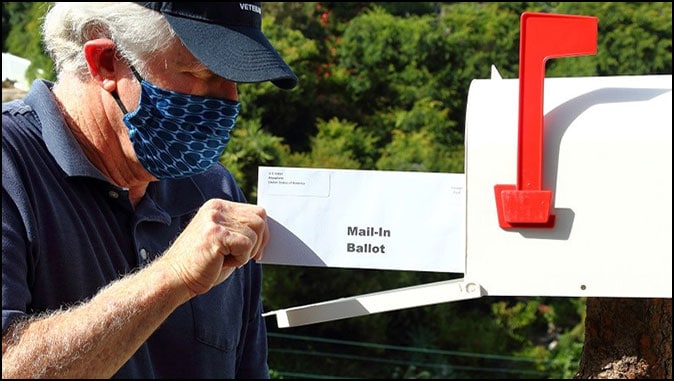 When Millions of Mail-In Ballots ‘Go Missing’
By Guest Writer

Authorities on election integrity say that those who are pushing mail-in voting over in-person voting are ignoring facts showing that literally millions of the ballots mailed out go unaccounted for every election season.

Hans von Spakovsky is a senior legal fellow for The Heritage Foundation who monitors developments affecting America’s election process, particularly court decisions and legislative and regulatory changes that impact that process. He says that more than 150 lawsuits “filed by the radical left” – an unprecedented number, he adds – are attempting to use the ongoing pandemic to nullify state requirements like voter ID laws.

“They are also trying to force states to make numerous changes, such as taking away the ability of voters to vote in person by forcing them to vote by mail,” he writes in a recent commentary.

“[That means] they don’t know what happened to the ballots after they handed them over to the U.S. Postal Service to deliver,” von Spakovsky adds.

The Heritage fellow isn’t alone in his disdain for mail-in voting. J. Christian Adams with the Public Interest Legal Foundation says it would be a “catastrophe” to put the election in the hands of the U.S. Postal Service.

“[Those 28 million ‘unknown’ ballots] represent 28 million opportunities for someone to cheat,” says Adams. “Absentee ballot fraud is the most common; the most expensive to investigate; and can never be reversed after an election.”

The PILF’s analysis of the EAC’s reports lists, by election year, the number of mail-in ballots that “went missing” and were officially designated as “unaccounted for.” For example, in the 2016 election 41.6 million ballots were sent out – and just under 6 million went missing; in 2018, almost 10.5 million of the 42.4 million sent out were unaccounted for.

So why not just continue to vote in person?

Von Spakovsky discounts those who are calling for all voting in November to be done via the mail-in route.

“If we are all going to our grocery stores and pharmacies, why can’t we vote safely in person? We can,” he argues. “Local election officials just need to implement the same safety precautions we are seeing in retail establishments.”

He also points out that some jurisdictions have already safely conducted elections with in-person voting during health crises – and maintains that given sufficient resources, states should be able to abide by the CDC guidelines and take the necessary precautions to ensure voters are safe while casting their ballots in the 2020 elections.

Arab Muslims are People of Color, Arab Christians are White

Arab Muslims are People of Color, Arab Christians are White What the New York Times’…

The Howling of the Democrats

The Howling of the Democrats Weeping and gnashing of teeth over losing Ginsburg seat. By…