What’s with this BCE and CE Nonsense?
By Todd Strandberg

For many years there has been a continuous effort to remove any reference to Jesus Christ in society. The major battles have long been lost with the Bible, and with prayer prohibited in schools and various other government organizations. The enemy is so dedicated to oppose the Lord Jesus, it is now going after the most trivial references to His holy Name. 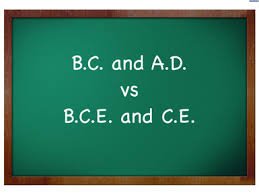 Among the more irritating manifestations of anti-God political correctness is the attempt to replace the terms AD and BC with CE and BCE. CE stands for “common era” and BCE for “before the common era.”

Even the most obscure symbol of Christ is under attack. The Swedish Transport Administration has banned outdoor Christmas lights because they don’t want to upset Muslims. It came up with some weird concern over the weight of the lights:

“Poles are not designed for the weight of Christmas lights, and we have to remove anything that should not be there. We guarantee safety first,” says Eilin Isaksson, national coordinator at the STD.

Many churches are hosting Muslim refugees, and they regularly take down altars and crosses. Pastor Joachim Deterding is the overseer of a Protestant church in Oberhausen Germany. When his church provided temporary shelter for 50 refugees from the Middle East, he had the altar and pulpit removed to make the refugees feel more at home.

Unless these guests are all vampires, they shouldn’t have any problems with the image of a cross. Many of these Muslims are actually worse than vampires; they treat kindness with disgust. If the sight of something related to the Bible is going to cause Muslims to flip out, we may have an indication that these people are not compatible with our Christian culture.

It is an absolute disgrace for Christians to be so timid in their deals with Islamists. We are told to let our light shine to the unsaved. Jesus warned what would happen to anyone who was too ashamed to defend the gospel:

“For whosoever shall be ashamed of me and of my words, of him shall the Son of man be ashamed, when he shall come in his own glory, and in his Father’s, and of the holy angels” (Luke 9:26).

The hostility that Christianity faces has no equal in any other religion. Christmas has become almost totally secularized, and yet people still oppose it. Christmas lights, flying reindeer, and talking snowmen have zero connection to the birth of our Savior.

Years ago Saturday Night Live came up with a Hanukkah Harry character. He was a parody of the modern-day image of Santa Claus, delivering toys to good Jewish boys and girls. There is no Ramadan Randy because Muslims would not tolerate any attempt at applying secular figures to one of its holidays.

I have never heard anyone question why we have planets named after Greek gods. You don’t have people saying, “We can’t name a planet after the god of war. Let’s rename Mars to Flemington after Scottish scientist, Alexander Fleming—who discovered Penicillin.

Even the most hardcore atheists should perfectly happy with the AD and BC date system. If we are basing our timelines on Jesus’ birth, we might as well keep his name. The Muslims have their own yearly calendar. The current Islamic year is 1438 Hijri (Anno Hegirae or AH), which is the year of the migration of Muhammad and his followers from Mecca to Medina. Of course, you are never going to see a movement to change the Islamic year to something more secular.

The enemy of truth will never be content with even with the mildest form of Christianity. The name of Jesus sparks fear in the hearts of all who are under the judgment of sin. King Herod feared the baby Jesus and wanted to get rid of him. The King Herod’s of today have the same mindset. Their fixation on opposing our Lord shows that Jesus is the only way of salvation.

If Jesus was a fake, the lost would just laugh Him off with all the other pagan gods. Because He is the only path to God the Father we need to resist those that seek to defame His name.

“For God so loved the world, that he gave his only begotten Son, that whosoever believeth in Him should not perish, but have everlasting life” (John 3:16).

Good vs. Evil in the Supreme Court

Good vs. Evil in the Supreme Court By Daniel Greenfield A few months after lefty…

Israel's 100-Year Storm By Terry James These days, it seems, we are more and more…