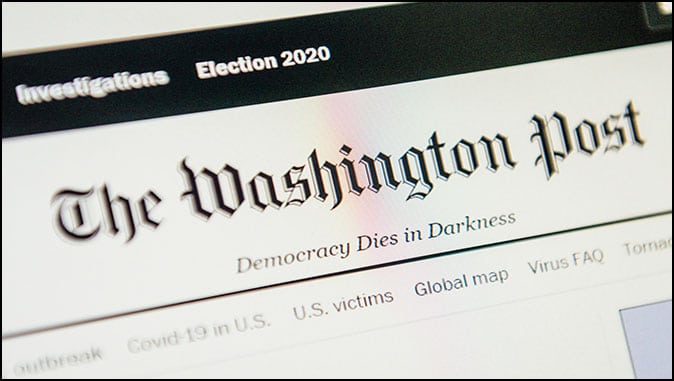 Washington Post fact-checker Glenn Kessler drew fierce criticism last week after saying he did not plan to maintain a “database” for President Biden’s falsehoods beyond his first 100 days in office. “I have learned my lesson,” Kessler tweeted. “‘Learned my lesson’ means who knows what the next four years will bring.”

Kessler compares Biden’s (67 false or misleading claims) to Trump’s first 100 days (511 claims.) In the last 100 days before the 2020 election, he counted 8,859 claims made by Trump. Being as it’s a leftist reporter determining if Trump had lied, the numbers don’t mean anything.

The reason why Kessler is shutting down his database is because he’s not doing his job. President Biden’s senile mind hardly knows fact from fiction. He naturally presents false information because of his age.

A person on Twitter reminded Kessler that fact-checking is part of his job:

“DO A DATABASE. This is your job. A database for every single president and politician. It is YOUR job to fact-check them & keep them handy for everyone. Come on, man. But go ahead and enjoy your 4-year vacation. Thanks for confirming your bias.”

The Washington Post appears to be quite selective when it comes to the urgency of its “fact-checks” of certain prominent politicians. Senator Tim Scott, R-S.C., was the subject of a lengthy hit piece by Mr fact-checker, Glenn Kessler. He went after Scott because he was chosen to give the Republican response to Biden’s address to Congress. Also, because he’s black, and liberals hate it when an African American leaves the Democratic plantation.

Tim Scott often talks about being the descendant of slaves. Scott has said his grandfather dropped out of elementary school to pick cotton, so the liberal newspaper enlisted its fact-checker to get to the bottom of the claim.

Kessler declared he “dug into the South Carolina census records” to “close this gap in Scott’s narrative” despite admitting “census data is historically questionable at best — and at times unreliable.”

Despite the fact that Kessler does not have any solid evidence to counter Scott’s claim, he argued that the senator was creating a narrative of Scott moving up from humble circumstances to reach a position of political power in the U.S. Senate. But Scott separately has acknowledged that his great-great-grandfather, Lawrence Ware, once owned 900 acres in South Carolina. Because wealth can come and go, it’s understandable that Scott’s grandfather could have fallen on hard times.

However, the Washington Post has yet to look into the “tale” from Vice President Harris, which has been accused of outright lies. Harris has repeatedly boasted of her parents’ involvement in the civil rights movement of the 1960s.

In an Elle magazine interview that was published in October, she recalled accompanying them to marches as a toddler in a stroller. The left doesn’t care at all if some of Harris’ claims are not historically possible. She could say she was the first Black woman to land on the moon.

The problem with the Biden administration being able to do as it pleases without any check by the liberal media is that it will lead to corruption. The saying, “I’m from the government, and I’m near to help,” is a sure sign of danger because the government causes more problems than it solves.

Ratings for CNN have declined because everyone knows that the network is just a lapdog for the Democratic party. People don’t need to watch this network because they can just assume what type of coverage it will air about Biden.

The only hope we have to avoid America turning into a banana republic is a blowback during the 2022 elections. The Democrats will win in the next election cycle because they will offer people more free money to buy their votes. When the system starts to break down and the value of money becomes nearly worthless, people will vote Democratic just to have a free meal.

If more people put their faith in God, our nation would return to its glory days of prosperity. Because most people trust the government, darker days are in America’s future.

“He that handleth a matter wisely shall find good: and whoso trusteth in the LORD, happy is he” (Proverbs 16:20).