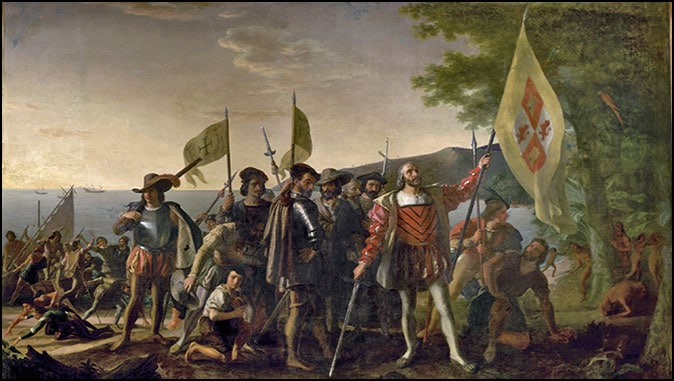 Was Christopher Columbus an ‘Islamophobe’?
Slate suggests the founding of America was “driven by Islamophobia.”
By Raymond Ibrahim

Christopher Columbus—that “genocidal madman and racist,” as he’s better known among the “woke” crowd, some of whom have vandalized his monuments—is back in the news, this time for his alleged “Islamophobia.”

In “Was Columbus’ Voyage to the ‘New World’ Driven by Islamophobia?,” an article published on Columbus Day (Oct. 12) by Slate, Rebecca Onion asked author Alan Mikhail, “Is it possible to use the word Islamophobia to describe the way Columbus, Isabella, Ferdinand, and other Christian Europeans felt at this time?”

It’s very tricky, the answer to this question. The idea is that there’s a thread of anti-Muslim sentiment from this period, and maybe even before, to today. In some ways you can draw a throughline. But I don’t want to buy into a story about some kind of eternal “clash of civilizations,” because there are plenty of examples of Christian Europeans and Muslims having quite positive interactions at the same time I’m talking about: the sharing of ideas, the exchange of goods, diplomatic relationships, fighting on the same side of wars against other enemies. And that’s part of the book, too—to point out that the Ottoman Empire has been part of “our history.”

So, what’s the real story of Christopher Columbus and the Islam question? First, some context: In 1453, when Columbus was 2-years-old, the Turks captured Constantinople, an event that rocked Christendom. Less than 40 years later, Ferdinand and Isabella captured the last bastion of Islam in Spain, Granada, an event that “produced an extraordinary effect throughout the Christian world and was viewed as a fitting revenge for the fall of Constantinople thirty-nine years earlier,” to quote an earlier historian. Even so, and although “what Constantinople was to the Ottoman sultan, Granada was to Ferdinand and Isabella,” the war with Islam was hardly over from Spain’s perspective.

No sooner was Granada conquered when the two monarchs funded the ambitious voyage of Columbus in an effort to launch “a final and definite Crusade against Islam by way of the Indies” (which culminated in the incidental founding of the New World). Many Europeans were convinced that if only they could reach the peoples east of Islam—who if not Christian were at least “not as yet infected by the Mahometan plague,” to quote Pope Nicholas V—together they could crush Islam between them. (The plan was centuries old and connected to the legend of Prester John, a supposedly great Christian monarch reigning in the East who would one day march westward and avenge Christendom by destroying Islam.)

All this comes out clearly in Columbus’s own letters: in one he refers to Ferdinand and Isabella as “enemies of the wretched sect of Mohammet” who are “resolved to send me to the regions of the Indies, to see” how the people thereof can help in the war effort; in another written to the monarchs after he reached the New World Columbus offers to raise an army “for the war and conquest of Jerusalem.”

Nor were Spain and Columbus the first to implement this strategy; once Portugal was cleared of Islam in 1249, its military orders launched into Muslim Africa. “The great and overriding motivation behind [Prince] Henry the Navigator’s [b. 1394] explosive energy and expansive intellect was the simple desire to take the cross—to carry the crusading sword over to Africa and thus to open a new chapter in Christendom’s holy war against Islam.” He launched all those discovery voyages because “he sought to know if there were in those parts any Christian princes,” who “would aid him against the enemies of the faith.”

Does all this make Columbus and by extension Ferdinand and Isabella—not to mention the whole of Christendom—“Islamophobes,” as Slate seems intent on publishing?

The answer is yes—but not in the way that word is used today. While the Greek word phobos has always meant “fear,” its usage today implies “irrational fear.” However, considering that, for nearly a thousand years before Columbus, Islam had repeatedly attacked Christendom to the point of swallowing up three-quarters of its original territory, including for centuries Spain; that Islam’s latest iteration, in the guise of the Ottoman Turks, was during Columbus’s era devastating the Balkans and Mediterranean; and that, even centuries after Columbus, Islam was still terrorizing the West—marching onto Vienna with 200,000 jihadis in 1683 and provoking America into its first war as a nation—the very suggestion that historic Christian fears of Islam were “irrational” is itself the height of irrationalism.

Note: Quotes in the above account on Columbus were excerpted from and are documented in Ibrahim’s, Sword and Scimitar: Fourteen Centuries of War between Islam and the West.