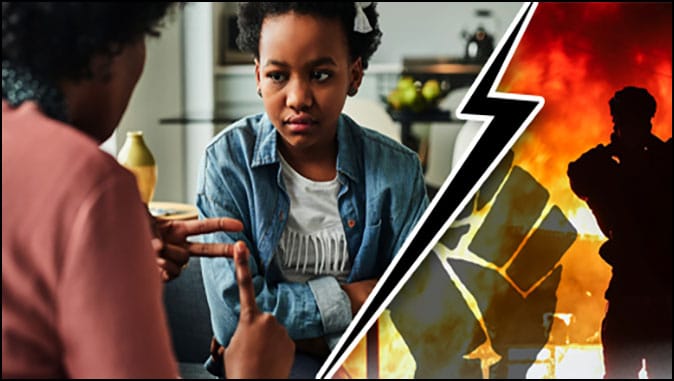 Warn Your Children About the Religion of Wokeism
By David E. Smith

God’s Word is filled with promises, commands, exhortations, and encouragement. Scripture is also replete with warnings. In 1 John 2:15-16, we read:

The world and it’s comforts, pomp, pleasures and cravings lure our children away from the Father and His Word with false promises of power, fame, wealth and luxury possessions and, to that end, it tempts them with intoxicating substances, feelings, and experiences.

We know that God, our Father and Creator, is the God of the Universe, but John 12:31 tells us that Satan is “the ruler of this world.” However, this title in no way implies that Satan has ultimate authority on earth. Rather, it references the specific way in which he rules over the unbelievers of this world.

Second Corinthians 4:4 states that Satan has “blinded the minds of the unbelievers, so that they cannot see the light of the gospel of the glory of Christ.” The enemy promotes false philosophies that blind unbelievers to the truth of the Gospel, imprisoning them in a fortress of his design. Only Christ can set these prisoners free.

Lest one think that born again Christians are immune from these machinations of Satan, the Apostle Paul warns:

Satan’s attempts to discourage, distract, deceive, even destroy human beings – image bearers of the Most High – flourish in our culture, a culture which is in open rebellion against God. Today, wicked ideologies flood the public square, infiltrating corporate America, Christian schools and universities, the medical establishment, every aspect of media, the military, and government at all levels.

In light of this culture shift, Dr. Al Mohler and others suggest there is a new religion in America: the religion of Wokeism. While this religion is not truly new, its adherents’ zealotry has ramped up dramatically in recent years. Wokies exude an air of confidence as they boldly assert that they are right and anyone who disagrees is wrong. They believe the salvation of humanity rests in following the tenets of Wokeism and use overtly religious language, much as Joe Biden did in calling the site of the Pulse Nightclub “hallowed ground” on the occasion of the five-year anniversary (6/12/21) of the Islamic terrorist attack on the LGBT bar.

Max Funk, in his article, “Wokeism – The New Religion of the West,” has this to say about the religious connection:

Wokeism is a religion. Although it has not been organized into any formal religious structure, it has all the functions of religious doctrine. It has a unique epistemology (theory of knowledge), an evaluation of the human condition, and a redemption narrative.

So, how did we – our nation – arrive at this point? To borrow a principle from physics, we created (or allowed the creation of) a vacuum – a vacuum in human culture, the human mind, the human soul. If you paid attention in physics class, you will remember that a vacuum does not remain empty.

The Gospel of Luke expresses the spiritual manifestation of this principle:

“When the unclean spirit comes out of a person, it passes through the waterless places seeking rest, and not finding any, it then says, ‘I will return to my house from which I came.’

And when it comes, it finds it swept and put in order. Then it goes and brings along seven other spirits more evil than itself, and they come in and live there; and the last condition of that person becomes worse than the first.” – Luke 11:24-26

Luke’s illustration describes what we are experiencing right now. “Agents of change” are working overtime in our nation to sweep it clean of the Judeo-Christian values and biblical worldview that were foundational in its formation.

They want to get rid of capitalism because it is bad; they want to limit or eliminate our civil liberties because they can be “harmful.” They even want to do away with the First Amendment. Clearly, they do not understand how precious these God-given liberties are! People who live under the limitations and oppression of socialist or communist regimes can only dream of the opportunities and liberties that the Wokies disparage and spurn.

With the house – our nation – swept clean of all they despise, the adherents of Wokeism will fill it with their pet agendas: Black Lives Matter; Critical Theory; Critical Race Theory; unrestricted, taxpayer-funded abortion on demand; radical sex education in K-12 government schools; unconditional acceptance of transgenderism and all manner of sexual perversions; and more. To paraphrase Luke 11:26, surely the state of the second house will be worse than the first!

Yet one of the most despicable aspects of the religion of Wokeism is the determination and zeal with which it pursues its primary target: our children. Brothers and Sisters, let us not deceive ourselves. Satan will go to great lengths to pull our children/grandchildren off the straight and narrow path that God calls them to walk. The religion of Wokeism is an ideal tool for his evil purpose.

So, what are parents, grandparents, and concerned citizens to do? How do we respond?

I firmly believe that the rise of the religion of Wokeism in our culture is yet another reason we ought to humble ourselves and cry out to God on behalf of our children and grandchildren. We must appeal to God each and every day to protect their hearts, minds, and souls from the wicked ways of this world.

Additionally, we must make sure that our own house is in order – swept clean of sinful tendencies by God’s gracious response to our daily confession and repentance – so we can model for our children/grandchildren lives lived in obedience, submission, and love for the Lord.

Finally, we must be guided by Truth. Dr. Everett Piper is fond of saying, “In these times of universal deceit, Truth is the only rebellion left.” The only thing that will save us from the lies of the religion of Wokeism and the lies of the world is Truth with a capital T, the Truth that is found in the One who proclaimed, “I am the way, the truth, and the life. No one comes to the Father but by Me.”

We must warn our children/grandchildren of the deceits of this world. Proverbs 23:23 teaches us:

“Buy truth, and do not sell it,
Get wisdom, instruction, and understanding.”

Therefore, we must warn them diligently and then ask ourselves at regular intervals if we are equipping our children/grandchildren to know, live, and love the Truth. Are we encouraging them to get wisdom, instruction and understanding? Are we impressing upon them a love for His Word? Do we cry out desperately on behalf of our children/grandchildren, asking God to protect them from the deceptions, snares, slings and arrows of the father of lies?

Empowered by our gracious and merciful God, may our answer be a resounding “YES!”

Dave Smith is the executive director of Illinois Family Institute (501c3) and Illinois Family Action (501c4). David has 25-plus-years of experience in public policy and grass-roots activism that includes countless interviews for numerous radio, television, cable programs and newspaper articles on topics such as the sanctity of life, natural marriage, broadcast decency, sex education, marijuana, gambling, abortion, homosexuality, tax policy, drug decriminalization and pornography. He and his wife of 26 years are blessed to be the parents of eight children. He also serves as a Republican Precinct Committeeman in his community and as an ordained minister and elder in his church.