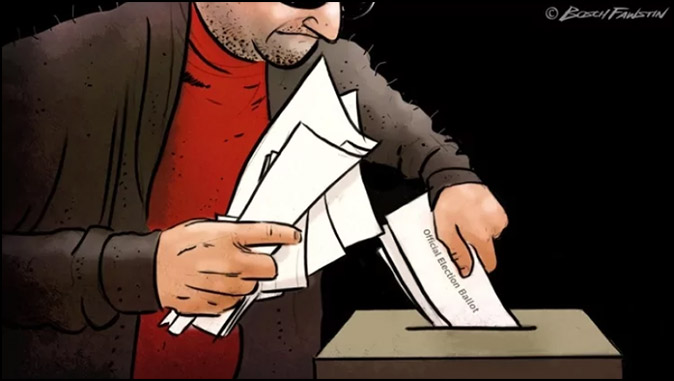 Voters Aren’t Choosing Democrats, Democrats Are Choosing Voters
The new system of elections has taken away the power of the people.
By Daniel Greenfield

“The people had squandered the confidence of the government and could only win it back by redoubled work. Would it not in that case be simpler for the government to dissolve the people and elect another?” — The Solution, 1953

To understand how we got here, we need to begin with the founding premise of America, the one that motivated former British subjects to take up arms against a king, that the people had the right to choose their governments.

Now the divine right of kings has given way to the radical right of leftists to take power from the people in the name of the people. Unable to directly coerce voters, they instead exploited loopholes and weaknesses in the system to reinvent who the people were.

Democrats began by choosing a new electorate, one that was strategically defined by Senator Ted Kennedy and others as being more demographically friendly to its political machines. Into the urban political machines that had begun to lose their old immigrant bases as the Irish, Italian and Jewish immigrants that had sustained them moved on to the suburbs, mass migration poured in a new electorate that would be more pliable and obedient to the party.

The combination of open borders and third world mass migration reshaped the political landscape. Cities, always prominent, became the 800-pound gorillas of politics, turning entire states in their direction. The nation’s demographics changed as rapidly as its politics did.

But that was only the first step. The second step, now well underway, was reshaping the structure of elections to allow Democrats to find the voters, instead of the voters finding them.

Voters going to the polls were exercising their power. But ballot harvesting and mail ballots transformed voting from an active act into a passive one. Voters weren’t choosing candidates, the political machines behind the candidates chose them. Massive voter registration, outreach and ballot harvesting machines targeted areas based on demographics and unearthed the votes that their statistical models showed that they needed in order to be able to win elections.

Election officials coordinating with Democrat operatives crunched the math and worked out how many votes would be needed for a given election. Big Tech bosses and their executives and engineers helped them develop the statistical models to harness the power of Big Data.

And elections came to bear little resemblance to people lining up to vote in their local house of worship. Big Tech had ‘disrupted’ another industry. Elections looked like Amazon: a massive giant leveraging its competitive Big Data advantage to disrupt how elections worked. And like many Big Tech operations that empowered monopolies while claiming to empower the people, elections went from empowering people to choose their representatives, to instead empower special interests, organizations and the party to win elections by choosing voters.

The bold idea of reversing power relations by reshaping the country to elect candidates, rather than shaping parties and candidates to appeal to the voters, reversed the historic gains of the American Revolution, turning America from a republic of free men to an oligarchy of the few.

Under the guise of ‘people power’, that is what the new elections have turned the country into.

While many concentrate on issues of voter fraud, they are symptomatic of a larger systemic change that transcends whether any given vote was cast legitimately to whether the system as a whole is legitimate. And the definition of a legitimate system, as set out by the Declaration of Independence, is one that allows the people to choose their representatives. Not vice versa.

It is difficult to look at today’s system of national elections and seriously believe that the results represent the consent of the governed. Democrats had previously argued that they were a more legitimately representative party because their identity politics included a wider spectrum of groups. But even in a midterm in which every single minority group, Latinos, Jews, black voters, American Indians and Asians, moved closer to Republicans, Democrats still held out.

They did it by analyzing voter trends and countering them by finding enough ballots to outweigh them. And in a system with ballot harvesting and mass migration, there will always be some ballots that can be found and delivered to outweigh the people. No matter how belatedly.

What happened in the midterms, once again, was that the voters rejected the Democrats, and the Democrats found other voters to overrule them. Those minorities who turned on the Democrats had their votes nullified by multi-billion dollar political machines who simply dug deeper, found folks who were (or perhaps even weren’t) legally eligible to cast a ballot and got to them.

With a massive national population that is being demographically transformed by millions of new arrivals, there will always be options for a political movement that is redefining elections from the active work of informed citizens to a passive surrender of support to the emissaries of political bosses. The old corrupt Tammany politics of wards and ghettos are running America.

What’s at stake is more than the outcome of any given election, but the very concept that America’s forefathers fought and bled for. America is not the only nation that has elections. Many countries, free and non-free, have them. What made our elections matter was that the power actually lay with the people, not with organizations and politicians claiming to represent them. When the people cease to be the source of political power, then elections become a meaningless charade that cover up the abuses of an oligarchy or a totalitarian state.

America’s elections only matter to the extent to which they represent an active decision by voters to choose officials to represent them, not a passive submission to their authority.

The Democrats have built a vast operation that allows them to ‘elect voters’. Unless America restores a system in which people elect politicians, our elections will remain fig leaves for a corrupt oligarchy of Big Tech monopolies and radical activists determined to take our power away.