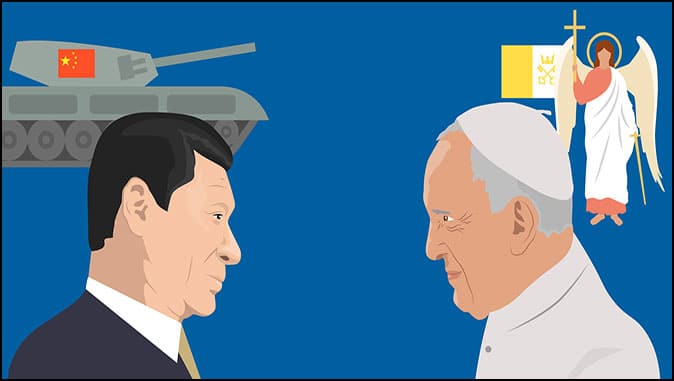 US Secretary of State Michael Pompeo’s September 30 – October 1 visit to the Vatican was a diplomatic profile in courage. Despite the Pope’s refusal to meet the U.S. Secretary of State, Pompeo repeated his warning to the Holy See that if it goes ahead with plans to renew the 2018 Sino-Vatican Agreement, it will compromise the Catholic Church’s moral authority. Pompeo also urged the Vatican to live up to its mission of defending human rights in China, where Catholics churches and shrines are being destroyed and priests imprisoned, and also urged the Pope to reconsider renewing the secret agreement with Beijing, which permits the Communist Party of China (CCP) to have a key role in appointing Catholic Bishops in China.

The Vatican has refrained from any condemnatory comment on the CCP’s persecution, incarceration, torture and forced labor of millions of Uyghur Muslims in Xinjiang Province, and has remained silent about Beijing’s contravening its pact with Hong Kong to honor “one country, two systems” until 2047. China has violated the civil rights of Hong Kong’s citizens.

Pompeo’s dose of reality came at a delicate moment for the Vatican. Italy’s Catholics in the diocese of Como in northern Italy were still mourning the September 15 knifing murder of Father Roberto Malgesini by an illegal Muslim immigrant from Tunisia. Pope Francis, while eulogizing Malgesini on September 27, the World Day of Migrants and Refugees, seemed to absolve the murderer of responsibility by describing him as a mentally deranged person, (malata di testa). The Pope has in the past failed clearly and categorically to condemn Koran-based justification of violated Islamic terrorism

The murder of Malgesini is tragically ironic: the priest was an advocate for migrants and an apostle to the homeless. It is possible that the murderer, Mohmoudi Ridha — quoted as saying, “The priest died like a dog, that was right.” — was motivated as well by violence-filled verses against “infidels.”

Pompeo disclosed his warning at a conference on religious freedom hosted by the American Embassy to the Vatican. Cardinal Pietro Parolin, the Vatican’s Secretary of State, and Bishop Paul Gallagher, the Holy See’s Minister of Relations with States, both disingenuously insisted that the Pope’s refusal to meet Pompeo was normal procedure as the “Pontiff refuses to meet with political officials prior to an election” — the U.S. presidential election was about a month away. The real reason for snubbing Pompeo was more likely the U.S. Secretary of State’s open criticism of the Pope’s pursuit of détente with the Chinese totalitarian regime despite the lack of any ostensible benefit resulting to or from the Holy See’s policy to date.

In mid-September, Pompeo had authored an article in the American Catholic journal First Things, in which he asserted that the Chinese people need the Vatican’s moral witness and authority to support China’s religious believers. Pompeo bolstered his case by laying out a series of China’s policies abhorrent to Vatican religious beliefs, including forced abortions and involuntary sterilizations. Pompeo’s criticism of the two-year old Sino-Vatican Agreement included: the Chinese Communist Party’s continued persecution of Catholic clergy and believers in China for refusing to embrace Communist-controlled religious institutions as well as the imprisonment of prominent Catholic protest leaders in Hong Kong. The Hong Kong Federation of Catholic Students was a driving force behind the anti-CCP demonstrations in the city. Perhaps the most stinging criticism in Pompeo’s article was his having pointed out the marked contrast in the Vatican’s current position on Communist China with the Holy See’s moral witness which helped liberate Central and Eastern Europe from communism in the late 20th century.

The highly visible rebuke of the Vatican’s inconsistent official commentary on human rights issues comes at an inopportune time for the Holy See, particularly as it involves China. The Chinese regime has in recent months accelerated new directives by CCP Chairman Xi Jinping to brutally suppress the cultural, linguistic, and religious identities of all of China’s principal ethnic minorities. These policies include: the extinguishing of all educational courses taught in the native tongue of the Mongols of the Inner Mongolia Autonomous Region, banning students and government workers from attending religious festivals in the Tibet Autonomous Region and the forced fusion of underground Christian churches with regime-controlled “patriotic” affiliations.

Pompeo’s moral counsel is likely to energize those high-level clerics and many within the Catholic faithful who also disapprove of the Pontiff’s pursuit of normalizing ties to Communist China. The most respected voice of opposition to the Holy See’s policy of granting the Communist Party of China a role in the appointment of Catholic bishops is Cardinal Joseph Zen Ze-kiun, the former Archbishop of Hong Kong. Zen directly questions the faith of Vatican Secretary of State Cardinal Parolin and holds that Parolin and Pope Francis are betraying the faith and flock, by recognizing seven bishops illegitimately appointed by the Communist Party. The pope, according to Cardinal Zen, is being manipulated by his advisors.

Cardinal Charles Maung Bo, Archbishop of Yangon, Myanmar (Burma) and President of the Catholic Asian Bishops Conference, is another outspoken opponent of the Vatican’s “opening” to China. Cardinal Bo, who has vilified the Communist Party of China for its “moral culpability for the COVID Virus pandemic,” also has declared that “the CCP is a threat to the whole world.” The presence of other prominent critics within the Catholic hierarchy of Vatican policies under Francis, such as U.S. Cardinal Raymond Burke, at the U.S. Embassy event which served as platform for Pompeo’s Vatican remarks, no doubt added to the Holy See’s indigestion. Possibly the most abrasively received comment came at the close of Pompeo’s article in First Things where he reminded the Vatican of the Apostle John’s counsel that “The truth will set you free.”

Pompeo’s position is reminiscent of an earlier era when Vatican and U.S. policy were aligned. It was then, in the 1980s, that the uncompromising condemnation by the sainted Pope John Paul II and President Reagan of the USSR’s “Evil Empire” helped tear down Moscow’s “Iron Curtain.” Maybe the victory of the Americans in the Cold War is not to the liking of Pope Francis. Is it really his intention to “undo all of the good work that the great John Paul II did in pursuit of human freedom and dignity”?