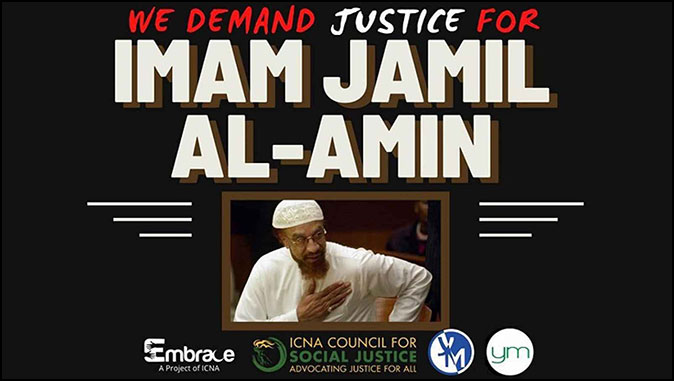 This month, the US Islamist group ICNA has been pushing hard for the release of H. Rap Brown, the convicted cop killer who now goes by his acquired Muslim name, Jamil Abdullah al-Amin. No doubt, the group is attempting to capitalize on the recent ill feelings towards law enforcement, propelled by nationwide protests and riots waving the banner of “Black Lives Matter.” Regardless of how some radicals view police, given ICNA’s terror-related history and present, ICNA’s support for this murderer is yet another reason why the organization should no longer be permitted to operate in America.

Established in September 1968, ICNA or the Islamic Circle of North America is the US arm of Jamaat-e-Islami (JI), the largest Islamist group in South Asia. As such, ICNA has had a number of extremist and terrorist relations.

Not long after ICNA’s founding, JI’s then-paramilitary wing, al-Badr, was helping to massacre people in East Pakistan, what is now called Bangladesh, in a genocide that took the lives of up to three million people. In November 2013, one of al-Badr’s commanders and former Vice President of ICNA (who is still involved with ICNA), Ashrafuz Zaman Khan, was sentenced to death (in absentia) for the murder of at least 18 individuals.

In August 2006, when the Al-Khidmat Foundation (AKF), a JI charity, took a delegation to Syria to present then-global Hamas leader Khaled Mashal a check for $100 thousand, ICNA was a partner and donor to AKF. Mashal thanked the delegation and said Hamas would continue to wage war on Israel. Today, too, ICNA is referred to as a partner and donor by AKF, and JI continues to support Hamas. Furthermore, the President of AKF, Muhammad Abdus Shakoor, is former Secretary General of ICNA.

In December 2017, ICNA’s overseas relief function, Helping Hand for Relief and Development (HHRD), organized an event claiming to assist persons with disabilities that featured representatives from AKF as well as the Timergara, Pakistan chief of Falah-e-Insaniat Foundation (FIF), Qari Rehmatullah. In November 2010, the US government designated FIF a front for Lashkar-e-Taiba (LeT), the Pakistani terrorist organization that was behind the November 2008 Mumbai Massacre in India.

The Government Affairs Specialist for ICNA Relief USA, ICNA’s domestic relief division, is Syed Ammar Ahmed. In February 2010, following a debate he participated in at a school, Ahmed wrote on Facebook, “I hate white people” and joked that he “should have threatened to blow up the school.”

In October 2000, ICNA’s South East Region used its website to promote the official websites of Hamas, Hezbollah and the Taliban. The group also published a link to qoqaz.net, a now-defunct financing and recruitment website for al-Qaeda, and encouraged people to donate to it. The webmaster of the ICNA site, Syed Khawer Ahmad, was as well a webmaster for Hamas, itself.

On August 2, 2020, ICNA sponsored a ‘National Call to Action’ to call for the freeing of infamous cop killer H. Rap Brown, a.k.a. Jamil al-Amin, from prison. Al-Amin, an ex-member of the Black Panther Party, made the infamous statement, “If America don’t come around, we’re gonna burn it down.”

In March 2000, police entered al-Amin’s Atlanta, Georgia neighborhood looking to serve him with a warrant for his arrest for failure to appear in court on charges of driving a stolen car and impersonating a police officer during a 1999 traffic stop. According to testimony given by one of the officers, Fulton County Sheriff’s Deputy Ricky Kinchen, after being told to raise his hands, al-Amin opened fire on the officers, landing multiple shots into the groin of Kinchen’s partner, Deputy Aldranon English, who would later be pronounced dead. Al-Amin was given a life prison sentence for English’s murder.

Participating at the ICNA event was long-time al-Amin advocate, Khalid Griggs. This past December, Griggs wrote of the “honor” it was to have met anti-Semite Kwame Ture, a.k.a. Stokely Carmichael, at a 1976 anti-Zionism conference, calling Ture a “courageous political visionary.” Ture is notorious for stating, “The only good Zionist is a dead Zionist” and for saying that Israel’s European-born leaders were not Semitic (i.e. Jews), labeling them “Cossacoids.” Griggs believes that the US is an “Israeli colony… owned and controlled by pro-Zionist, Israeli fanatics.” In October 2018, Griggs posted on Facebook a doctored photo of track star Jesse Owens, at the 1936 Olympics, smiling arm-and-arm with Adolf Hitler, glorifying Hitler.

Also speaking at the ICNA event was Omar Suleiman, a popular figure within the Muslim community whose virulent hatred of Israel has been well-noted. As reported by Petra Marquardt-Bigman, Suleiman, in 2014, prayed on Twitter for a third intifada (violent Palestinian uprising) and stated that “the beginning of the end of Zionism is here.” Also in 2014, Suleiman posted on Facebook that “Zionists are the enemies of God.” In December 2017, during a speech he gave to an outdoor crowd in Dallas, Texas, he prayed for the destruction of the Jewish homeland, stating, “God willing, we will live to see the liberation of Palestine in our time.”

Yet another speaker was al-Amin’s son, Kairi al-Amin. Kairi, much like his violence-supporting father, is in favor of rioting as a response to perceived racism. Last month, Kairi posted a video of a July 4th march, held in Stone Mountain Park, Georgia, organized by the Not F*cking Around Coalition (NFAC), a vulgarity-laden black armed militia. In the video, the leader of the march, Grandmaster Jay, told the crowd that they would start shooting white people, in retaliation for blacks being shot. He stated, “You said you will start shootin’ black people at 8:00, we gonna start shootin’ white people at 8:05.” Kairi endorsed the video with a ‘strong arm’ emoji.

Leading up to ICNA’s event, the group posted colorful ads on social media calling on people to get involved in the cause to free al-Amin. While doing so, ICNA repeated conspiracy theories about Al-Amin’s murder case, including a false confession made by al-Amin ally Otis Jackson, who later recanted his story. ICNA, as well, lauded al-Amin as “one of America’s greatest historical and contemporary figures” and a “fighter for justice on the frontlines of the civil rights movement.”

The words and actions of ICNA, on behalf of al-Amin, are lies intended to subvert justice and free an unrepentant cop killer, whose influence within the black and Muslim communities could incite more bloodshed given the racially charged atmosphere in America today. If he were to actually be freed, it would be seen as a victory for those whose goal is to destroy America and create chaos by burning her cities, undermining and weakening police, and destroying people’s livelihoods.

ICNA’s public support for a cop killer and having a murderer in its ranks shows the true goals and violent ideological underpinnings of the organization. ICNA’s documented ties to terror should have been enough reason to shut down the group as a threat to national security, but its malevolent campaign to free a convicted cop killer, who has leveled threats against America, is even more reason to immediately closure ICNA’s offices.