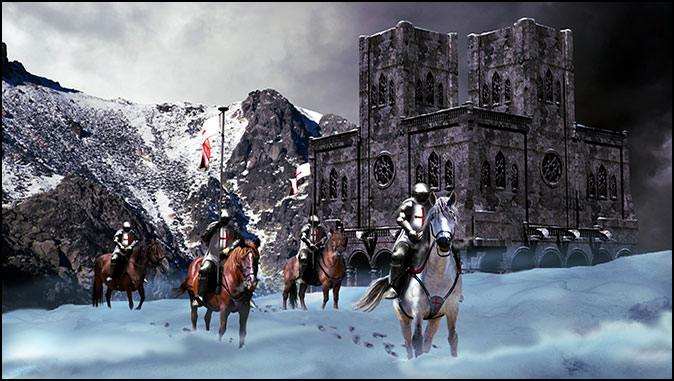 Universities Demonize and Disavow Christian Self-Sacrifice and Altruism
AKA, “the Crusades.”
By Raymond Ibrahim

The Indiana-based University of Valparaiso is scrapping its Crusader mascot, nickname, and logos—because they convey “hate” and are not “inclusive” enough. According to the university’s Feb. 11, 2021 statement:

Interim President Colette Irwin-Knott of Valparaiso University (“Valpo”) announced today that it will retire its existing mascot, the Crusader.… The Crusader imagery related to the Crusades has been embraced and displayed by hate groups including the Ku Klux Klan. “The negative connotation and violence associated with the Crusader imagery are not reflective of Valpo’s mission and values, which promote a welcoming and inclusive community,” Irwin-Knott said, … [adding] “Valpo is and always has been a faith-based institution, and we want to make sure our symbolism is in alignment with our beliefs and speaks to the core values of the Lutheran ethos.”

In the coming month, a committee will be established “to engage the campus community in considering and adopting a new mascot.”

The statement further justifies its action by adding a reminder that Valpo is only doing what schools and other institutions all throughout America are doing:

Valpo’s decision is in line with athletic teams across all levels – from interscholastic to professional sports programs – that are replacing offensive mascots with less divisive symbols. With this decision, the university is following the same course as virtually all other universities that carried the Crusader as their mascot or a symbol for their school.

To be sure, this sort of betrayal of the West’s heritage is not without precedent and is hardly limited to college campuses, AKA, hotbeds of political correctness and Western guilt/self-hatred. In November, 2019, the owners of a famous New Zealand rugby team scrapped their longtime logo—a Crusader—to show how “woke” they were vis-à-vis Muslims.

Nor is it just “militant” expressions of Christianity (vis-à-vis Islam) that are being flushed down the memory hole to appease Muslims, but mere expressions of Christianity. As one memorable example, in 2004, “Spanish football giant Real Madrid … dropped the Christian cross affixed at the top of its official crest after signing a sponsorship deal with the National Bank of Abu Dhabi.”

Meanwhile, Muslim nations, such as the home of Islam itself, Saudi Arabia (AKA “US friend and ally”™), proudly depict scimitars on their national flags, with the words, “There is no god but Allah, and Muhammad is his messenger”—words that have gotten countless people, past and present, slaughtered for not reciting. No non-Muslim seems to be offended or concerned by that, but Westerners are rushing over themselves to change the logos and flags of, not nations, but schools or teams of men who play with balls—lest they appear too militant, too “mean.”

That, in a nutshell, sums up how the West and Islam see themselves and respond to one another. While Islam venerates its violent, jihadi past—and, wherever possible, seeks to relive it—the West is constantly disavowing its Crusader heritage.

And what exactly were the Crusades? They were a militant, no nonsense response to more than four centuries of jihadi aggression against and conquests of Christian and European territory. The particular Muslim invasions (between 1071 and1095) that occasioned the First Crusade saw hundreds of thousands of Eastern Christians (Armenians, Syriacs, and Greeks) slaughtered or enslaved by Muslim Turks acting in the name of jihad. As the contemporary Byzantine princess, Anna Komnenos wrote, “cities were obliterated, lands were plundered, and the whole of Rhomaioi [Anatolia] was stained with Christian blood.”

Emperor Alexios I Komnenos (r.1081 to 1118), Anna’s father, recounted his people’s travails in a letter addressed to his friend, the “Count of Flanders and to all the princes of the whole kingdom, lovers of the Christian faith.” In it, he lamented how the Turks “pillaged daily and constantly raided, with Christians being murdered and mocked in various indescribable ways.” Not only did the Muslim invaders “defile the holy places in innumerable ways, [and] destroy them,” but they would “circumcise Christian boys and youths above Christian baptismal fonts, pour the blood from the circumcision into the fonts in mockery of Christ, force them to urinate on it, and then drag them round the church and force them to blaspheme the name and faith of the Holy Trinity. Those who refuse are subjected to various punishments and eventually killed.” As for Christian women, the Muslim invaders:

“took virgins and made them public prostitutes…. Mothers were violated in the presence of their daughters, raped over and over again by different men, while their daughters were compelled, not only to watch, but to sing obscene songs and to dance. Then they changed places, and the suffering, which is painful and shameful to speak of, was inflicted upon the daughters, while the filthy activity was adorned by the obscene songs of the unfortunate mothers…. When the female sex was not spared (an action which might be excused since it is at least in accord with nature), they became worse than animals, breaking all human laws by turning on men. Their lust overflowed to the point that the execrable and profoundly intolerable crime of sodomy, which they committed against men of middle or low station, they also committed against a certain bishop, killing him.”

It was this—concern for fellow Christians—that prompted the First Crusade when it did; and it is this that is making contemporary Western Christians fall over themselves to disavow anything associated with the Crusades.

After describing some of the aforementioned atrocities at the Council of Clermont in France on November 27, 1095, Pope Urban II cried out, “Who is to revenge all this—who is to repair this damage, if you do not do it?” The Christians present cried “God wills it!” and the First Crusade was born.

Soon they would set off to provide succor to their Eastern coreligionists, while sacrificing much in the process: rather than gain anything from the First Crusade, most who took the cross lost—and expected to lose—everything, from their estates in Europe to their lives in battle against Muslims.

This is ironic in light of the university’s recent statement. In it, Irwin-Knott declares that, “At Valpo, we strive to seek truth, serve generously and cultivate hope. We do not believe having the Crusader as our mascot portrays these values.”

Actually, it was the First Crusaders who lived up to “these values.” They did “strive to seek the truth” by ascertaining—and accepting and acting on—what Islam was doing to Christians in the East; and they did “serve generously and cultivate hope” for those same Christians: The sources contain numerous accounts of Armenians and other Eastern Christians falling on their knees and tearfully thanking their Western coreligionists for liberating them from the Islamic yoke.

Such are the contradictions that we are regularly expected to swallow nowadays. For, and contrary to all the glib talk of “Valpo” and its interim president, it is in fact Western universities that do not “strive to seek truth”—especially those truths that stray from the “official” narrative—nor do they “serve generously and cultivate hope” for the billions who suffer from politically incorrect causes around the world, chief among them those many millions who suffer under Islam.

Note: Historical quotes in this article were sourced from and are documented in the author’s book, Sword and Scimitar: Fourteen Centuries of War between Islam and the West.

Dr. Fauci’s New York State of Mind When deception is what helps Democrats - and…

Biden Invites Tidal Wave of Illegals into the U.S.

Biden Invites Tidal Wave of Illegals into the U.S. Welcome to the business boom for…

This Elephant in the Living Room is Out of Control—All Cultures Are Not Equal!

This Elephant in the Living Room is Out of Control—All Cultures Are Not Equal! By…

Biden: It's Okay to Finance China's Military By Gordon G. Chang Originally Published by the…