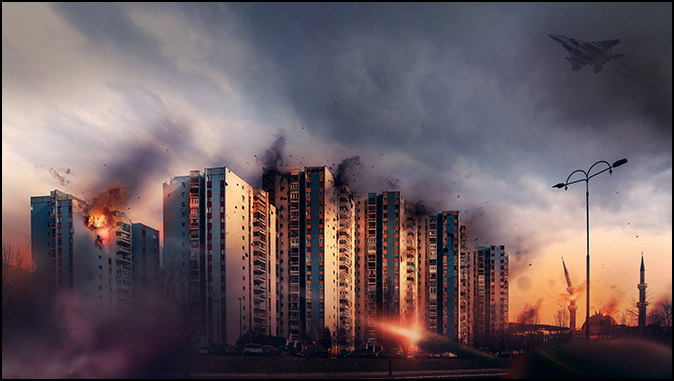 Ukraine: Only Bad and Worse Choices
We can no longer afford to ignore the lessons of history.
By Bruce Thornton

The war in Ukraine has seemingly devolved into a vicious stalemate. Ukrainian counter-attacks have pushed Russia back, but a definitive ejection of Russia from all its territorial gains at this point doesn’t seem likely. Commentary has settled on two choices for resolving the crisis: a diplomatic resolution that requires Ukraine to sacrifice territory; or a larger Ukrainian offensive to push Russia back to its pre-2014 borders, supported by more aid and materiel from NATO countries, which in practice really means the U.S. Each choice is fraught with difficulty and danger.

This predicament of only bad and worse choices is one endemic to foreign policy, as military violence always exacts the price of “exorbitant risk,” as Henry Kissinger put it, of unforeseen and costly consequences. In the case of the Russo-Ukrainian war, that risk includes the possibility of Russia using tactical nuclear weapons, and triggering a wider nuclear engagement that could escalate into an apocalypse.

On the other hand, allowing Russia to keep territories acquired by force creates the moral hazard of endangering global supplies of energy, and encouraging Russia and other aggressive irredentist and revanchist powers like China and Iran to make the same wager that the West does not have morale or even resources to punish their aggression.

The difficult solution for avoiding such dilemmas is to anticipate and forcefully deter an enemy’s ambitions, and all the means he has for realizing them, before they become kinetic. Yet the West for a century has done a poor job at such long-range planning and instituting preemptive policies. Too often we have been like Demosthenes’ Athenians in the early 4th century B.C., who failed to preempt King Phillip II of Macedon’s advance against the southern Greek politically free city-states. Demosthenes chastised the Athenians, saying they “carry on the war with Phillip, exactly as a barbarian boxes…when struck, [he] always clutches the place; hit him on the other side and there go his hands. He neither knows nor cares how to parry a blow or how to watch his adversary.”

In other words, how to anticipate the enemy’s next move and preempt it with significant action if necessary. Even worse is our habit of doing nothing other than to bluster or impose mild or token sanctions against an aggressor. In order to avoid the politically risky bad choice of timely military action, we make the worse choice of non-lethal responses like diplomatic engagement or economic sanctions, the political, geopolitical, and material costs of which unfold over time, and so can be postponed for a while.

This dangerous short-term thinking, as Tocqueville wrote nearly 90 years ago, characterizes democracies: “It is this clear perception of the future, founded upon judgment and experience, that is frequently wanting in democracies.” Present suffering will weigh more in the balance than the much worse future sufferings that follow inaction. As history confirms, consensual, participatory governments with regularly schedule elections are prone to this unwillingness to take preemptive action.

The Ukrainian crisis illustrates this timeless truth. As early as 2008, Putin began his plan to take by force control of Russia’s “near abroad,” the border territories lost when the Soviet Union collapsed in 1991. He started with South Ossetia in Georgia, which, after international “peace talks,” he turned into a Russian satellite. In 2014, he seized Crimea and parts of eastern Ukraine. Sanctions were imposed, along with school-marmish rhetoric from Barack Obama and his Secretary of State John Kerry, who said, “You just don’t in the 21st century behave in 19th century fashion by invading another country on completely trumped-up pretext.”

Actually, history tells us that despite the idealism of our “rules-based international order,” such aggression is the eternal modus operandi of interstate conflict, and failing to act leads to appeasement. Even historical illiterates like John Kerry recognize the most famous example of such appeasement. Addressing House Democrats in 2013 over Syria strongman Bashar al-Assad’s use of chemical weapons against civilians – crossing Obama’s earlier “red line” – Kerry said this was our country’s “Munich moment.”

But like many people using this analogy, he failed to recognize that Neville Chamberlain’s disastrous diplomacy in September 1938 was the culmination of the serial appeasement of Germany for the previous two decades, moments of escalating aggression and violations not just of the Versailles settlement, but also of much-celebrated multination agreements like the Kellogg-Briand Pact (1928) and the Locarno Treaties of 1925, both of which were signed by the future Axis aggressors.

Consider the following timeline of aggression in the years before Munich, the warnings ignored by the victors of the First World War. But this record is prefaced by one of the lost opportunities in the early Thirties to confront Hitler and slow his momentum.

In July of 1934, Nazi agents assassinated Austrian Chancellor Engelbert Dollfuss as the first move in what would be the Anschluss of Austria four years later. In 1935 the Third Reich’s interference in another nation’s government alarmed its neighbor Benito Mussolini, and moved him to join England and France in the Stresa Front, an agreement that pledged the three members would resist any attempts to redraw the borders of nations in Europe – the last phrase added by Mussolini, who already was planning his invasion of Ethiopia.

Yet England damaged the Front’s cohesion when in June 1935 she unilaterally negotiated with Germany the Anglo-German Naval Agreement, which recognized Germany’s build-up of its Navy despite Hitler’s withdrawal from the Versailles Treaty, and “sanctioned Germany’s right thereafter to rearm,” as Germany’s head of the navy put it.

Indeed, Chamberlain’s worthless agreement with Hitler, which Chamberlain triumphantly waved on his return to England, referred to the Anglo-German Naval treaty as “symbolic of the desire of our two peoples never to go to war with one another again. We are resolved that the method of consultation shall be the method adopted to deal with any other question that may concern our two countries.” As for Hitler, he assured a worried Foreign Minister Ribbentrop, “Oh, don’t take it so seriously. That piece of paper is of no further significance whatsoever.”

No doubt emboldened by England’s concessions, Mussolini in October 1935 abandoned the Stresa Front and commenced his invasion of Ethiopia. Rather than taking action to prevent this brutal conquest, France and England left the response up to the League of Nations, which imposed feeble sanctions and indulged in harsh rhetoric against Mussolini, angering Il Duce and convincing him that both nations were weak and useless as allies.

Hitler drew the same lesson from “diplomatic engagement” and the reliance on a feckless League of Nations in the face of aggression. In March, 1936 he remilitarized the Rhineland with a mere 36,000 troops and police in the face of France’s 500,000 troops, most on or near the Maginot Line. Hitler’s move posed a grave threat to France’s national security, given Germany’s earlier use of the Rhineland as the launch-pad for five German invasions of France over the previous 135 years. Yet again, the Allies responded to Hitler’s aggression with nothing but diplomatic bluster.

Indeed, two years later during a meeting with Austrian Chancellor Kurt Schuschnigg, in which Hitler browbeat him into accepting the Anschluss, he made his contempt for England and France clear. When Schuschnigg replied, “We are not alone in the world,” Hitler contemptuously rejected this feeble claim by dismissing Schuschnigg’s obvious reference to England and France: “England will not lift a finger for Austria,” he scoffed. “And France? Well, two years ago when we marched into the Rhineland with a handful of battalions – at that moment I risked a great deal. If France had marched then we would have been forced to withdraw…but for France it is now too late.” The next month, Austria had been absorbed into the Third Reich, and two years later France lay prostrate under Nazi occupation.

What this sequence of events demonstrates is that appeasement beget appeasement, as one aggressor is encouraged by the appeasement of another. As we have seen, this same dynamic prefaced the current war in Ukraine. Even when Vladimir Putin began moving his 300,000-strong invasion force to Ukraine’s eastern border in March and April of 2021, nearly a year before the war started, the U.S. and NATO did nothing even though Putin had made his intentions clear. And no doubt Putin was further encouraged by the Biden Administration’s disastrous withdrawal from Afghanistan that April, which cost the lives of thirteen soldiers and billions in weapons, leaving the terrorist Taliban once more in control of the country.

The failure to act preemptively with a credible threat of force paved the way for the Munich debacle in September 1938. This culmination of weak morale and lack of martial confidence lit the fuse of the most destructive war in history. As Churchill wrote in his 1948 The Gathering Storm, the first volume of his history of the war, “the malice of the wicked was reinforced by the weakness of the virtuous,” who failed to see that “the counsels of prudence and restraint may become the prime agents of mortal danger,” and “the middle course adopted from a desire for safety and a quiet life may be found to lead direct to the bull’s-eye of danger.”

Yet here we are, repeating that old folly in Ukraine, and facing two worse choices because we lacked the will to make the bad one, and instead preferred the delusion of “safety and a quiet life” over our national security – all because in our chronocentric arrogance we ignore the lessons of history.