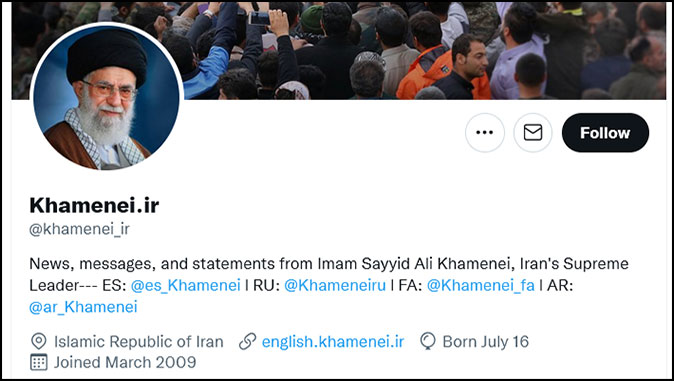 Everyone knows that one Donald J. Trump of Palm Beach, Florida is the source and summit of evil in the modern world, but he has been banned from Twitter for over a year now, so the republic (you know, that thing the Democrats constantly refer to as “our democracy”) is safe. Twitter is nothing if not consistent: Trump is so extremely evil that Twitter is permitting official accounts of the Islamic Republic of Iran, one of the world’s premier regimes of color, to threaten to murder Trump and officials from his administration without being banned or even suspended. Death threats are ordinarily not permitted, but when they’re against Trump, they serve wokeness; what could possibly be wrong with that?

On New Year’s Day, Iran’s Supreme Leader, Ayatollah Ali Khamenei, tweeted: “Martyr Soleimani is an eternal reality that will live on forever. His assassins – including Trump & the like – will go down in history’s garbage bin, but of course after receiving retribution in this world for the crime they committed.” That “retribution in this world” bit was a clear threat, but Twitter did nothing to restrict Khamenei’s account.

Nor did Twitter do anything to the account of Iran’s Islamic Revolutionary Guards Corps when it tweeted: “The Islamic Republic of Iran considers vengeance against those responsible for the Baghdad crime to be the right of all believers; whether they are drops in the ocean or bits of sand in the desert they’ll seek vengeance next to the criminals’ homes.”

Rep. Greg Steube (R-Fla.) commented: “So, the leftist oligarchs at Twitter will allow the [Islamic Revolutionary Guards Corps] to tweet death threats at President Trump, but will deplatform him for calling for a peaceful protest? Last I checked, making death threats is inciting violence.”

Rep. Pat Fallon (R-Texas), skewered Twitter’s hypocrisy: “In Twitter’s safety rules and polices, they say, ‘You may not threaten violence against an individual or a group of people.’ If this is the case, why is the world’s largest state sponsor of terrorism, Iran, allowed to threaten to kill President Donald Trump? Not only is Twitter exclusively censoring conservatives, but now they are letting Iran’s armed forces issue death threats to a former sitting president. Twitter needs to consider following their own policies and immediately remove this tweet.”

When contacted by the Washington Free Beacon, “Twitter did not respond to a request for comment on why the tweet remains active and whether that tweet violates the company’s guidelines.” That’s not surprising. What could they possibly say? Rep. Marjorie Taylor Greene (R-Ga.), who was recently banned from Twitter herself, called Twitter “an enemy to America and can’t handle the truth.” When Twitter allows Iranian officials who shout “Death to America” a platform to threaten an American and bans that same American on false pretenses, it’s hard to say that Greene is wrong.

A year ago, U.S.-based Iranian human rights activist Masih Alinejad, who was targeted for kidnapping by Iranian operatives on American soil, declared: “In 2019 I called on Twitter to shut down Khamenei’s accounts for not only inciting violence but ordering the murder of 1,500 peaceful protesters. Some opposed this campaign, Now the same people are cheering that Trump has been suspended. It’s shameful.” Indeed it is. Alinejad asked then-Twitter top dog Jack Dorsey: “You’ve suspended the account of @realDonaldTrump, but you’ve not suspended the account of @khamenei_ir, who used the @Twitter platform to issue death threats. He’s imprisoned various twitter activists while banning Iranians from freely accessing Twitter. Why?”

Alinejad’s questions were, of course, ignored, and Khamenei remained on the platform.

The Islamic Republic of Iran isn’t alone, either. Reuters reported last August that on Twitter, “Taliban spokesmen with hundreds of thousands of followers have tweeted updates during the country’s takeover. Asked about the Taliban’s use of the platform, the company pointed to its policies against violent organizations and hateful conduct but did not answer Reuters questions about how it makes its classifications. Twitter’s rules say it does not allow groups who promote terrorism or violence against civilians.”

What explains Twitter’s tolerance and magnanimity toward bloodthirsty and repressive Sharia regimes? Do they hate Trump with such passionate intensity that anyone, anyone at all, no matter how evil, who hates Trump also will immediately become Twitter’s ally and receive its favor? Why, yes.