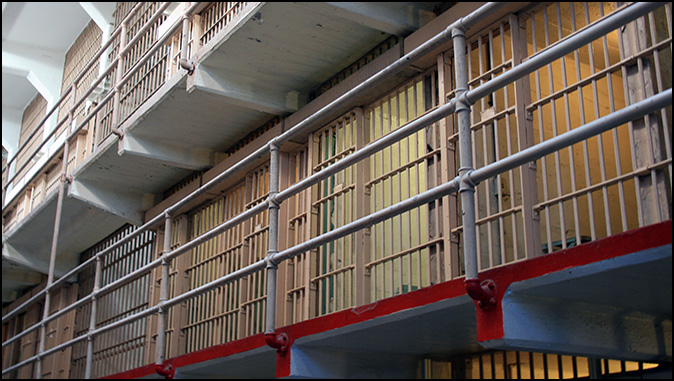 Trans Women Knock Up Real Women in NJ Prison
As it turns out, trans women are men after all.
By Robert Spencer

Trans women are women, we’re told, and if you deny that, you could be banned permanently from Twitter, as was PJ Media’s Matt Margolis for the crime of noting that trans women aren’t women at all, but men. Nor is Twitter alone in enforcing this new woke orthodoxy: the American Civil Liberties Union (ACLU) recently fought for and won the right for twenty-seven convicts who claim to be women to be housed in an all-female prison in New Jersey. On Wednesday, however, in a heavy blow to the establishment narrative, it was announced that two genuinely female inmates of the same prison have gotten pregnant, and one or two of the trans women are responsible. It turns out trans women are men after all, and in New Jersey, there is absolute proof.

The UK’s Daily Mail reported Wednesday that both of the pregnant inmates at Edna Mahan Correctional Facility in Clinton, N.J., which only houses women (over 800 of them), aside from the 27 men pretending to be women whom the ACLU got placed there, “had sex with transgender prisoners.” It was unclear whether there were two fake women involved, or just one. The Mail noted that “Edna Mahan, the only women’s prison in the state, does not require transgender inmates to proceed with reassignment surgery in order to be housed.” What could possibly go wrong?

Now we know, as if it weren’t obvious already.

Edna Mahan Correctional Facility seems less concerned, however, about the ramifications of their having 27 men housed in the women’s prison than they are about the possibility of rape. “The Prison bosses said that in both instances, the sex was consensual,” reports the Mail. Oh, well, then, no problem!

This particular manifestation of the insanity of our age has been going on for about a year, since the ACLU and a trans woman filed a lawsuit, demanding that male prisoners who say they’re women be housed in the women’s prison. The state quickly settled. The trans woman who brought the suit, who is named in court papers as Sonia Doe, got $125,000 in damages and $45,000 for attorneys’ fees, and according to the Mail, in a most interesting and unexplained detail, “won’t face any sanctions in connection with an assault that occurred in prison in May 2019.” Sonia Doe said, “When I was forced to live in men’s prisons, I was terrified I wouldn’t make it out alive. Those memories still haunt me. Though I still have nightmares about that time, it’s a relief to know that as a result of my experience the [New Jersey Department of Corrections] has adopted substantial policy changes so no person should be subjected to the horrors I survived.” Right. Instead, they’ll be subjected to different horrors.

Yet even now, after the inexorable realities of biology have shown trans proponents’ madness to be exactly that, the ACLU isn’t willing to give even an inch. ACLU legal director Jeanne LoCicero declared that housing men in women’s prison was “in line with New Jersey’s strong anti-discrimination laws that prevent discrimination and harassment on the basis of gender identity.”

That may be, but “New Jersey’s strong anti-discrimination laws” clearly don’t prevent pregnancy on the basis of gender reality, do they? And the pregnancies aren’t the only problem with the woke fantasies that the ACLU is foisting on the state of New Jersey (and the rest of us). The Edna Mahan correctional officers’ union stated, “We opposed this policy change believing it would be detrimental to the general population of female inmates being housed at Edna Mahan and also bring added stress to our correctional police officers assigned to this institution.” Obviously. But their position wasn’t politically correct, and so was ignored.

Wait, there’s more. According to the Daily Mail, “in 2021, two Edna Mahan prisoners filed a lawsuit seeking for the gender identity policy to be revoked, after they were allegedly harassed by transgender prisoners.” ACLU wonks probably never envisioned a scenario in which the “women” for whose “rights” they were fighting would engage in harassment of actual women, or if they did, they dismissed such thoughts as beyond the bounds of what good woke people are allowed to think these days. Meanwhile, the complainants “also claimed the transgender inmates were engaging in sexual activity with cisgender prisoners.”

That was last year. Nothing was done. Now two inmates are pregnant. How much more affirmation of reality do New Jersey officials need before they recognize that trans women are men and often behave as such, and thus do not belong in a women’s prison? In a sane world, the two pregnant inmates in New Jersey would be the occasion for a society-wide reconsideration of the entire transgender phenomenon and a reassertion of basic and obvious realities. But that’s not the world we live in.

Priorities: U.S. Military Base Is Hosting a Drag Show

Priorities: U.S. Military Base Is Hosting a Drag Show Meanwhile, our enemies are focused on…

Are Christians Being Persecuted in America?

Are Christians Being Persecuted in America? A slippery slope that bodes ill for the future.…