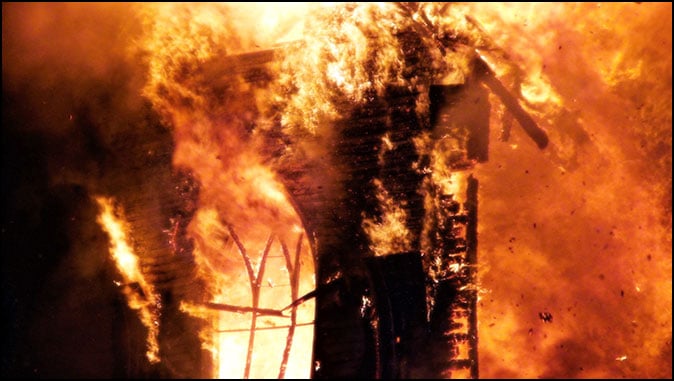 A Coptic Christian church was recently burned to the ground — not in Egypt, where the torching of Coptic churches is not an uncommon occurrence, but in Canada, also known as “the church-burning centre of the Western world.”

In the early morning hours of July 19, St. George Coptic Orthodox Church in Surrey, which served 500 families and provided food for the homeless, was set aflame and completely destroyed. Only one charred wall remains standing.

According to the report, “The cause of the fire is still under investigation, but Surrey RCMP [police] said it is being treated as ‘suspicious.’ The St. George Coptic Orthodox Church was also the target of an attempted arson just last Wednesday, although authorities do not know if the two incidents are connected.”

What, exactly, do Canadian mounted police find “suspicious”? The church was clearly targeted for arson, as evidenced by the fact that it was targeted for arson a few days earlier, and at the very same time (between 2:30-4:00 am). On July 14, surveillance video captured a woman lighting a fire, one that failed to catch, at the church door. That the “authorities do not know if the two incidents are connected” seems like wishful thinking.

After expressing its “immense sadness and pain” at the loss of the church, a statement from the Coptic Orthodox Diocese of Mississauga called on Premier John Horgan and the authorities to expedite the investigation, correctly observing that “The timing of this fire…raises many questions about what the authorities did to protect our church, especially considering the attempt on the same church this past Wednesday.”

Similarly, congregant Nancy Khalil, whose family helped build the now destroyed sanctuary, as well as dozens of “priceless” hand-painted icons, also expressed disappointment that “neither provincial nor federal leaders had yet spoken out about the fire.” “It hurts,” she said, “to see no word from the government. I’m very, very much hoping for at least a statement from the premier to condemn what is happening.”

She shouldn’t hold her breath. The leaders of Canada could care less about yet another church burning to the ground. Before this Coptic church was burned, at least 50 other churches, mostly Catholic, a few Anglican, were also vandalized or torched in Canada. Here’s how Canada’s leading voices responded:

– Harsha Walia, the head of British Columbia’s Civil Liberties Association — which claims to “promote, defend, sustain, and extend civil liberties and human rights”—tweeted: “Burn it all down.”

– Prominent Newfoundland lawyer, Caitlin Urquhart, feels the same way — “Burn it all down.”

– Heidi Mathews of Harvard Law School bizarrely described the vandalization and torching of churches as “the right of resistance to extreme and systemic injustice.”

– As for the Prime Minister himself, Justin Trudeau, after offering the usual lip service and saying that ongoing church attacks are “unacceptable,” he said: “I understand the anger that’s out there…against institutions like the Catholic Church. It is real, and it is fully understandable given the shameful history that we’re all becoming more and more aware of.”

So attacks on Christian churches are “unacceptable”—but they’re also “understandable.” Considering that these two words neutralize each other, Trudeau’s stance is impotent, his words meaningless.

But why are they “understandable” in the first place? According to Canadian “mainstream” media — all of which are left of Left—unmarked graves of Natives were recently discovered by boarding schools, and the Catholic Church is being accused of killing them and trying to cover it up. The problem, however, is that this widely shared narrative appears to be inherently false (see here and here): these graves were once marked and therefore known, and most of those buried in them died of natural causes.

More specifically, the deaths mostly took place in the early 1800s. Apparently some plague — epidemics were especially common back then—broke out in these church-sponsored boarding schools for natives, in part due to the prevailing hygiene and lack of proper medical treatment (in comparison to modern standards and technology).

At any rate, that the current accusation against the Catholic Church was always a pretext to justify anti-Christianism in general is amply demonstrated by this most recent torching of a Coptic Orthodox church: what on earth do the Copts, Egypt’s native Christians, who began migrating to Canada over a century after these graves were first dug, have to do with this issue?

Nothing, they just happen to be Christian—and that’s apparently all that matters, all that warrants hate crimes and indifference to them in Leftist Canada. Evil, after all, never needs an excuse to manifest itself, though a pretext always offers good cover.