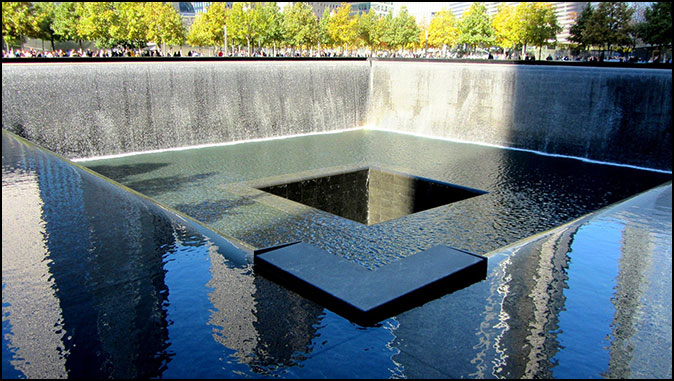 Today’s 19th Anniversary of 9/11
Biden and Harris blithely ignore the findings – and warnings – of the 9/11 Commission.
By Michael Cutler

Today, even as we remember the terror attacks of September 11, 2001, America finds itself under attack by anarchists and Radical Leftists and violent criminals who have been released under the guise of “bail reform” and to protect criminals from COVID-19 while they commit murders, rapes, robberies and other violent crimes.

Certainly there is no shortage of news reports about acts of extreme violence carried out across the United States primarily in cities run by Leftist Radicals literally following the old dictum of news reporting, “If it bleeds, it leads.”

However, the threat of terrorism continues but has been all but ignored by the media and by our politicians.

Consider that New York’s disgusting mayor, de Blasio attempted to block the reading of the names of the victims of the terror attacks of 9/11 and the lighting of the twin spotlights, a practice that has been ongoing since September 11, 2001, purportedly out of concerns of the COVID-19 virus, a concern that he ignored during massive violent demonstrations in NYC, the city that was the most heavily impacted by those attacks.

On August 14, 2020 The Miami Herald reported, ‘This is a disgrace.’ Outrage after 9/11 light show canceled over COVID-19 concerns.

Additionally, for the first time, Americans who were born after the attacks of 9/11 will be voting. Furthermore, many of our schools are failing to teach their students about the attacks of 9/11 or the ongoing threat of terrorism posed by radical Islamists. Indeed, who could ever forget the outrageous description of the 9/11 terror attacks by Rep. Ilhan Omar when she said that on that day, “Some people did something”? On September 11, 2019 Fox News reported on this: “Ilhan Omar slammed on 9/11 anniversary by victim’s son after ‘some people did something’ quote.”

Furthermore, “Sanctuary” policies implemented by radical political “leaders” act in opposition to the findings of the 9/11 Commission and undermine national security and public safety for our entire nation.

The official report, 9/11 and Terrorist Travel, included this paragraph:

Thus, abuse of the immigration system and a lack of interior immigration enforcement were unwittingly working together to support terrorist activity. It would remain largely unknown, since no agency of the United States government analyzed terrorist travel patterns until after 9/11. This lack of attention meant that critical opportunities to disrupt terrorist travel and, therefore, deadly terrorist operations were missed.

In the upcoming Presidential debates all of the candidates for the Presidency and the Vice Presidency should be asked, “Have you read The 9/11 Commission Report and the companion report, 9/11 and Terrorist Travel?”

However, I doubt that this vital question will be asked of those who aspire to be our next Commander-in Chief.

Clearly Presidential candidate Joe Biden and his running mate Kamala Harris have not learned the lessons that the terror attacks of 9/11 should have taught us. They have proposed to gut immigration law enforcement and provide providing lawful status to unknown millions of illegal aliens.

There would be absolutely no way to interview these individuals who entered the U.S. surreptitiously. There would be no way to conduct field investigations to determine the truthfulness of the information that they would provide in their applications for legalization.

This ignores that the 9/11 Commission identified immigration fraud as the key method of entry and embedding used by terrorists determined to launch deadly attacks in the United States. This was the focus of my article, “Immigration Fraud: Lies That Kill.”

These two excerpts from the afore-noted report 9/11 and Terrorist Travel addressed the nexus between terrorism and immigration fraud:

Once terrorists had entered the United States, their next challenge was to find a way to remain here. Their primary method was immigration fraud. For example, Yousef and Ajaj concocted bogus political asylum stories when they arrived in the United States. Mahmoud Abouhalima, involved in both the World Trade Center and landmarks plots, received temporary residence under the Seasonal Agricultural Workers (SAW) program, after falsely claiming that he picked beans in Florida.

This paragraph is found on page 98:

Terrorists in the 1990s, as well as the September 11 hijackers, needed to find a way to stay in or embed themselves in the United States if their operational plans were to come to fruition. As already discussed, this could be accomplished legally by marrying an American citizen, achieving temporary worker status, or applying for asylum after entering. In many cases, the act of filing for an immigration benefit sufficed to permit the alien to remain in the country until the petition was adjudicated. Terrorists were free to conduct surveillance, coordinate operations, obtain and receive funding, go to school and learn English, make contacts in the United States, acquire necessary materials, and execute an attack.

I have testified before numerous hearings conducted by various House and Senate committees and subcommittees on various aspects of the immigration crisis, most often about that nexus between immigration and terrorism, public safety and national security.

Back on May 5, 2005 the House Subcommittee on Immigration, Border Security and Claims conducted a hearing on the topic, New ”Dual Missions” Of The Immigration Enforcement Agencies. I testified at that hearing.

What was particularly striking about this hearing was that the Chairman of that subcommittee, John Hostettler, a Republican, challenged the way that the George W. Bush administration created the Department of Homeland Security in violation of the enabling legislation, the Homeland Security Act of 2002 (HSA). He noted the following in his prepared testimony: “Failure to adhere to the statutory framework established by HSA has produced immigration enforcement incoherence that undermines the immigration enforcement mission central to DHS, and undermines the security of our Nation’s borders and citizens.”

Hostettler’s courageous criticism of the Bush administration demonstrates that until the election of President Trump, neither the Democrats nor the Republicans really wanted to address the multiple failures of the Immigration system as I wrote in an earlier article, “Sanctuary Country – Immigration failures by design.”

Biden’s plan to create a massive amnesty program for what he claims would be 11 million illegal aliens but would actually involve a multiple of that already huge number.

Immigration fraud would permeate such a massive amnesty program where the hapless adjudication officers could not keep up with the onslaught of applications.

Earlier this year I addressed the magnitude of such a massive immigration amnesty program in my article, “Comprehensive Immigration Reform Should be Renamed the “Overwhelm America Act” in which I noted that a number of universities have estimated that there are at least 25 million illegal aliens in the United States. I would suggest that even that number is much smaller than the true number of such aliens.

The major fact being ignored by everyone, however is that if those aliens were to be granted legal status, they would automatically have the absolute right to immediately petition to have all of their spouses and minor children to be admitted into the United States as lawful immigrants.

Imagine if, on average all of these legalized aliens have 3 or 4 minor children back home. The number is likely to be even higher. All of them would have an absolute right to join their newly legalized parents in the United States.

Thus we would really be looking at an influx of unknown tens of millions of additional alien children who would be enrolled in our schools and, in a short period of time, would join the labor pool. The economics of this, coupled with the impact on housing, critical infrastructure, hospitals, and other such factors would cause America to implode. We could be looking at the legal immigration of one hundred million such immigrants — literally overnight — who would overwhelm our schools, critical infrastructure and do irreparable harm to Americans.

Every person in America has an environmental footprint. Those who immigrate to America not only need a place to sleep but food, water, electricity, transportation, healthcare and other necessities.

For all of the breast-beating by the Left about “sustainability,” the Biden plan would dump tens of millions of lawful immigrant workers into our labor pool, displacing American workers and suppressing wages.

So much for Biden’s “promise” that if elected he would help American workers get better-paying jobs!

Biden’s “promises” are actually threats aimed at the lives and livelihoods of Americans during a particular treacherous and difficult era.