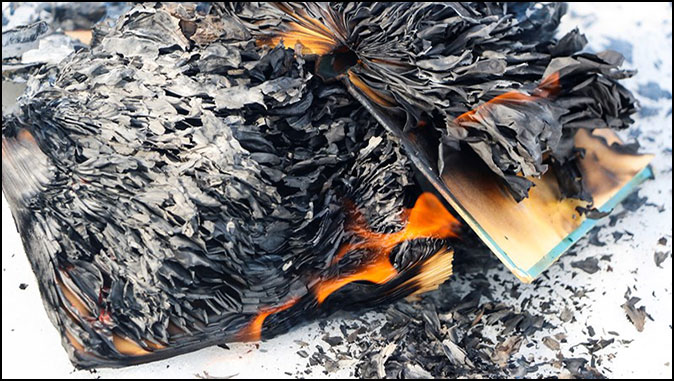 Then They Burned the Bibles
By Dr. Michael Brown

It’s no surprise that rioters in Portland burned Bibles this past weekend. As we’ve said for weeks now, the spirit behind the riots is the spirit of lawlessness. It is anti-God and anti-Christ, and that’s why synagogues and churches have also been targets.

When it comes to the Bible, for some, it is the ultimate symbol of oppression. Of religious tyranny. Of abusive authority.

It is the evil book on which America was founded, and it should be burned, along with the American flag. It is racist, homophobic, and misogynist. It supports genocide and apartheid, and it is the divinely-sanctioned manual for slave owners. To the flames!

Such is the mentality of the radical left, as reflected in groups like Antifa and BLM (speaking, again, of the organization, in distinction from the truth that black lives matter).

The words of Ian Miles Cheong, managing editor of Human Events, have been widely quoted since the Bible burning incident. He tweeted, “I don’t know what burning the Bible has to do with protesting against police brutality.

“Do not be under the illusion that these protests and riots are anything but an attempt to dismantle all of Western Civilization and upend centuries of tradition and freedom of religion.”

Yes, it is beyond ludicrous to suggest that the burning of Bibles has any connection at all to the death of George Floyd, himself a professing Christian. And it is ridiculous to think there is any real connection between the Bible and police brutality.

In Alinsky’s own words (in the acknowledgment section of his Rules for Radicals): “Lest we forget at least an over-the-shoulder acknowledgment to the very first radical: from all our legends, mythology, and history (and who is to know where mythology leaves off and history begins—or which is which), the first radical known to man who rebelled against the establishment and did it so effectively that he at least won his own kingdom—Lucifer.”

Even if this was done entirely tongue in cheek, it is noteworthy that the one Alinsky chose to praise as the first rebel is Lucifer, while God is characterized as “the establishment.” Could he have made himself any clearer? (Interestingly, Alinsky was raised as an Orthodox Jew but left Judaism entirely rather than become a rabbi.)

What we are seeing, then, in these riots, is ultimately an attempt to cast off the rulership of God. In the words of the rebellious kings in Psalms 2 (speaking against the Lord and the Davidic monarch who ruled over them): “Let us break their chains and throw off their shackles” (Psalm 2:3). We will not have God rule over us!

That’s why Bibles are being burned. It is an open expression of hostility to the Judeo-Christian God and Judeo-Christian values. It is the thumbing of the nose to divine authority. It is overt rebellion.

A July 31 article in The Federalist by Krystina Skurk, was titled “4 French Revolution Trends That Have Started In The United States.” Trend #4 was, “Violent Hostility Towards Religion.”

She wrote, “To say the French Revolution was hostile towards religion is an understatement. Church property was nationalized, tithing was outlawed, church authorities were made employees of the state, and 30,000 priests were exiled…

“Traditional religion in the United States has also come under attack by the modern radical left. And, while things haven’t yet got to the level of the French Revolution, the current anti-Christian climate does not bode well for the future.”

To be sure, there was much in the traditional religion of France that needed reform. It is also true that the Bible has often been misused by religious leaders for their own fleshly purposes.

But the Bible itself has had made an incredibly positive impact on the world.

And when rightly applied, the Bible’s principles have liberated women, slaves, and other oppressed groups.

And it is easy to respond to the charges raised against the ethics of the Bible.

That’s why I tweeted on August 1, “First they burned the federal buildings, then they burned the churches, now they’re burning Bibles. Rather than asking ‘What is next?’ we should ask, ‘Who is next?’”

Let the reader be warned.