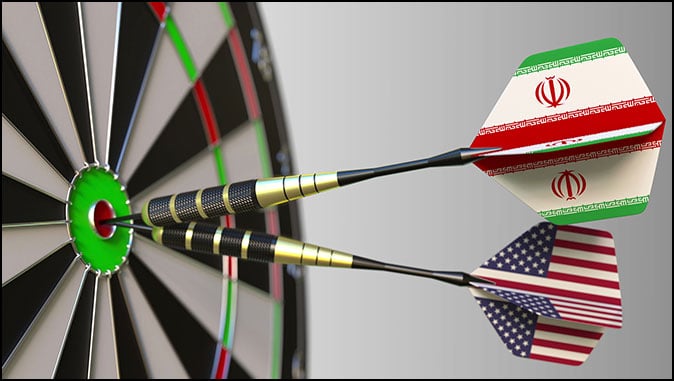 Iranian Foreign Minister Mohammad Javad Zarif evidently had no idea that Israel had launched 200 airstrikes against Iranian targets in Syria until John Kerry, now President Biden’s climate czar, told him, according to Washington Free Beacon reporter Adam Kredo. Kredo managed to obtain the audio file of Zarif’s leaked phone interview in which Kerry’s disclosure was revealed and had it independently translated.

“Kerry told me that Israel had launched 200 airstrikes against you [Iran],” Zarif is heard saying. “You didn’t know?” asked his interviewer. “No, no,” Zarif replied.

If this information had already been made public in the press, there would be no reason for Zarif to use what was supposed to be a confidential interview to cite Kerry as his source. In any case, whether or not Kerry was simply passing on information already reported in the press, it begs the question of what else Kerry might have shared with Zarif from intelligence sources that Zarif chose not to mention during his interview.

Kerry should be required to testify under oath to Congress about Zarif’s claim. If it turns out that Kerry was sharing any classified information with Zarif to which he had access before, during or after his term as Secretary of State, he should not only lose his government job and security clearance. He should face possible prosecution.

“These are very serious allegations and knowing the position that he holds in government and position that he did hold, yes, it should be investigated. Knowing if these are true, I think it should go beyond him just resigning,” said Rep. Kevin McCarthy (R-Calif.), the House Minority Leader.

Republican Rep. Lee Zeldin, a member of the House Foreign Affairs Committee, said that “Israel remains America’s staunchest and most loyal ally in the Middle East, and the idea that America’s former top diplomat would leak sensitive information about covert military operations to the world’s largest state sponsor of terror — putting Israeli lives at risk — is massively alarming.” Rep. Zeldin added that Kerry should “immediately testify before the House Foreign Affairs Committee to address these serious allegations, and if Kerry did actively undermine Israel, he must resign from the Biden administration immediately and have his security clearance revoked​.”

After the initial report of Zarif’s interview appeared in the New York Times, Kerry tweeted a denial: “I can tell you that this story and these allegations are unequivocally false. This never happened – either when I was Secretary of State or since.”

It is hard to take Kerry’s denial at face value. Kerry has maintained a buddy-buddy relationship with Zarif, at least since they both were heavily involved together in the Iran nuclear deal negotiations. Back in 2016, after the Iranian regime took the Obama administration to the cleaners, Kerry went so far as to call Zarif “a patriot all the time” and a “capable negotiator.” Too bad for the United States that Kerry was a totally incompetent negotiator, who along with his boss sold out his country to reach a deal with Iran at any price.

In 2018, Kerry admitted that after he left his top diplomat job, he had met with Zarif “three or four times.” Kerry mentioned that Syria came up during their discussions without elaborating. Perhaps Zarif has now filled in at least some of the blanks.

The context in which Zarif brought up Kerry’s name during the interview lends credence to Zarif’s claim that Kerry was the source of the information Zarif received regarding the Israeli airstrikes. Notably, Zarif had not thrown out Kerry’s name for public consumption. The interview was not supposed to be broadcast. Zarif appeared to be expressing privately his personal appreciation for Kerry’s willingness to privately disclose to his partner in the nuclear deal negotiations what Kerry knew about Israel’s military actions against Iranian targets in Syria. Zarif wanted his continuing friendship with Kerry to remain under wraps. Such friendships with the enemy are not a way to survive in the Iranian regime.

After the audio of the interview leaked, Zarif hastened to apologize to the Ayatollah Ali Khamenei. “I am so sorry that part of my comments were stolen and published for misuse by enemies of the country and its people, and that it caused you, supreme leader, to feel regret,” Zarif wrote on Instagram on Sunday. Khamenei had shown his displeasure earlier in the day.

Kerry’s willingness to privately share information about Israel with Zarif is consistent with Kerry’s willingness as Secretary of State to throw Israel under the bus. Kerry (along with his boss) ignored Israel’s existential concerns with the disastrous nuclear deal that Kerry negotiated with his pal Zarif.

Kerry took a shot at Israel in 2014, saying that Israel was at risk of becoming “an apartheid state” if it did not come to terms with the Palestinians.

During the waning days of the Obama administration, Kerry tried to defend the Obama administration’s surrender to the Palestinians by not vetoing the infamous anti-Israel Security Council Resolution 2334. Kerry claimed that the final text of Security Council Resolution 2334 was “balanced” and that it was consistent with long-standing U.S. policy. Nothing could be further from the truth. The resolution was virtually all about condemning Israeli settlements and declaring them to be illegal under international law, presumably including Israeli Jews’ dwellings in the Old City of Jerusalem. A truly balanced resolution would have cited Hamas and the Palestinian Authority by name for incitement to genocide against Jews and committing or condoning random terrorist attacks on civilians, in violation of the Convention on the Prevention and Punishment of the Crime of Genocide and international humanitarian law. But the resolution did no more than urge both sides to refrain from “incitement and inflammatory rhetoric.”

John Kerry’s disgraceful record goes all the way back to his testimony as a young man in 1971 to a Senate committee on behalf of the group Vietnam Veterans Against the War, accusing the U.S. military of “war crimes” and “racism.” Kerry is 50 years older now, but certainly not any wiser or more patriotic.