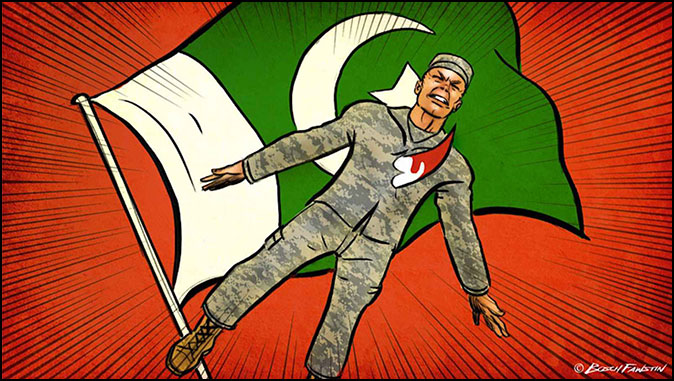 The War on Terror Sacrificed Thousands of Lives to Avoid Tough Political Decisions
We have failed to identify the enemy. And until we do, we can never win.
By Daniel Greenfield

Going after training camps and terror leaders made sense, but it was also the most difficult militarily, requiring the deployment of troops to distant countries to engage in guerrilla warfare in hostile environments and counterterrorism in enemy cities, and the easiest politically.

Of the three infrastructures, domestic, state, and organizational, Osama bin Laden had the smallest constituency. Political leaders, Republican or Democrat, knew that they could expect to pay the smallest political price for targeting him or other Al Qaeda terrorists on the ground.

Spending the lives of thousands of American soldiers was easy compared to the political challenges of rooting out the domestic Muslim Brotherhood operation, its mosques and organizations, or trying to hold Pakistan, Saudi Arabia, and Qatar accountable.

Going after Al Qaeda training camps and leaders made sense, but in isolation it was a strategy that was doomed to fail because it targeted terrorist middlemen rather than their state sponsors or the growing Muslim populations in the United States that were being recruited for terrorism.

The Al Qaeda leadership could always fade away, amplify their propaganda, and crowdsource terrorism to local Muslim populations while we spent our strength chasing them around the world. And that’s exactly what they did. While we tried to fight a conventional war, a new generation of Al Qaeda and ISIS propagandists, some operating inside our countries, used the money from their state sponsors to recruit and train the so-called “lone wolves” over the internet.

No one has yet come up with an answer to this new strategy for conducting domestic terrorism in America except to “partner” with Islamist groups on how to “deradicalize” terrorists. That and the Obama administration initiating a CVE program of arguing with the terrorists on Twitter.

This sort of thing is a politically safe strategy that avoids the explosive problem of a growing domestic Islamist population and an increasingly influential Islamist organizational infrastructure.

In 2001, the Islamist groups were mostly marginal. In 2021, they’re an integrated part of the leftist intersectional movement, and presidents and senators advocate for their causes. What would have been politically difficult in 2001 has long since become politically untenable.

Like the Europeans, our political elites argue that Islam has nothing to do with Islamic terrorism because politicians adopt the narratives that fit the political realities, not the military ones. The same process that led to the disastrous Afghanistan withdrawal resulted in a generation of mishandling the War on Terror by following the politically easy narratives of hunting terrorists while neglecting the backers and recruits who could continually regenerate their movements.

The conviction that Islamic terrorism was the product of a tiny minority of extremists huddling in caves and training camps was a deliberate misunderstanding of how terrorism actually worked.

Al Qaeda was a startup operation drawing on the support of powerful countries and wealthy donors above, and on recruits from massive populations of devout Muslims below. Islamic terrorist groups are just the community organizers of the Jihad, recruiting the latter for the causes of the former. Terrorism could no more be defeated by destroying Al Qaeda than the Left was beaten when ACORN was broken up. It’s easy enough for the big money to restore old organizations or form new ones that draw on the same conditions in the same populations.

Organizations are the most fragile of the three groups, but also the easiest to reconstruct.

And the Jihadists, like the Taliban, can simply outwait us knowing that as long as the money and the people are there, it’s only a matter of time until they can rebuild their operations. Until then they’re happy enough to let us pour billions into the countries they plan to inherit in the vain hope of convincing their people that an inclusive government is better than tribal supremacism

But the political establishment, Democrat and Republican, found two decades of war much more palatable than having to deal with the difficult political realities of Islamic terrorism.

And there’s no sign of that changing any time soon.

Thousands of dead Americans are far more conceivable than admitting that the real axis of evil wasn’t just a few countries with dictators, but encompasses the wealthy Muslim countries that are our allies, and that Islamic terrorism is rooted universally in the Koran and locally in ethnic tribalism, and cannot be countered by overthrowing a dictator and offering democracy lessons.

Standing up to oil-rich kingdoms would have cost far fewer lives than spending decades in Afghanistan, but it would have also blown up the economy and international trade. Fundamentally rethinking immigration would have been even more painful for the party of demographic change and for the party of cheap labor. War was the cheapest political option.

But it may be comforting to remember that we have been down this road before.

American leaders spent the first generation of the Bolshevik revolution bailing out the Soviet Union from famine and war, doing business with it, enabling its conquests, and finally letting the Communists take China and all of Eastern Europe before we learned our painful lesson.

The lesson was learned not because our leaders grew smarter, but because the ruthlessness and scale of the enemy became inescapable. Even then we spent the Cold War trying to figure out how to live in peace with the big Communists while fighting brushfire wars with the little Communists, leading to lots of lives lost and what looked like a pathway to our defeat.

The Soviet Union eventually collapsed while Communist China adapted, leaving us with a new war with an enemy that we keep enabling because it’s politically and economically cheaper.

It took a generation after Tiananmen Square for our leaders to slowly realize that we are on a collision course with Communist China. So it shouldn’t surprise us that they have yet to come to the painfully obvious conclusion about the Jihad even two decades after September 11.

We didn’t defeat the Soviet Union. Our economic and social setup outlasted theirs. Communist China and the Islamists assume that their social and economic systems will outlast ours, and that they can exploit fractures and weaknesses in our systems to corrupt and conquer us.

Our various enemies were correct in assuming that our political leaders lacked the will to make the necessary decisions. Where they erred was in assuming too much and pushing too far. The Japanese made that mistake in Pearl Harbor, the Soviets in Berlin, and Al Qaeda on 9/11. The Jihadists haven’t made one final mistake yet, but history suggests that they will.

America, to its friends and enemies, and to its own patriots, can be an infuriating mix of weakness and strength, idealism and corruption, division and unity. And it’s never entirely clear, even to us, when the tipping point that turns one into the other will unexpectedly arrive.

The great tragedy of the aftermath of September 11 is that our leaders proved willing to sacrifice soldiers, but not the dream of a democratic world order, and instead sacrificed lives to that dream. They took the road that was easiest for them and hardest for so many military men.

The War on Terror only became a forever war because we failed to confront two of the three pillars from which the enemy draws its strength. After two decades, we’ve seen the limitations of a military option that is not combined with foreign policy and immigration decisions that would cut off the true economic and demographic sources of the enemy’s strength. Until our leaders are ready to make the hard choices and our people are ready to elect those who will, the forever wars will go on, not just in distant countries, but in the streets of our own cities.

We have failed to identify the enemy. And until we do, we can never win.