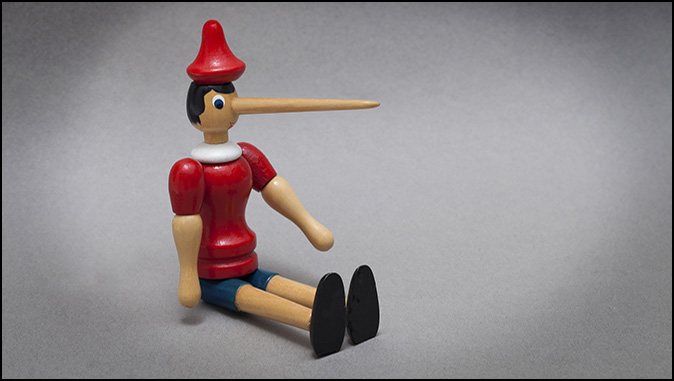 The Ultra-Buck Passer and Liar in the White House
Still deflecting blame for Bidenflation.
By Joseph Klein

On May 10th, President Joe Biden delivered a speech on inflation in an effort to get ahead of the expected bad news the next day concerning the Consumer Price Index (CPI). The president said that fighting inflation was now his “top domestic priority” even though it was not that long ago when he dismissed the steep price increases Americans were experiencing as merely “transitory.”

President Biden’s speech was long on passing the buck to others and short on offering real solutions. The president refused to accept any responsibility for the inflation that began surging early in his term.

Instead of following the advice from the sign on President Harry Truman’s desk in his White House office, “The Buck Stops Here,” Biden took to heart President Truman’s quip: “If you can’t convince them, confuse them.”

Indeed, President Biden tried to spin his own disastrous economic policies into something positive. He shamelessly boasted, “I think our policies help, not hurt.”

At a Democratic National Committee fundraiser on May 11th, Biden said that “until we got elected and we changed presidents, I think people started to lose faith in the capacity of the American government to deliver — to deliver, to make life better for people.”

Sure enough, the latest CPI inflation news was bad. The Bureau of Labor Statistics (BLS) announced on May 11th an overall CPI increase of 8.3 percent from April 2021 through April 2022. This was slightly smaller than the 8.5 percent increase for the 12-month period ending in March 2022, but still a very alarming number for everyday Americans trying to make ends meet. This latest annual CPI increase is nearly six times the annual increase of just 1.4 percent when President Biden took office.

The core CPI index (excluding food and energy) rose 6.2 percent over the 12 months between April 2021 and April 2022, with the month-to-month core CPI increase doubling between March and April 2022 versus between February and March.

Sellers’ production cost increases will usually end up being pushed through to retailers and ultimately to consumers, which will further fuel the surging inflation that the American people are experiencing every day.

In short, the Bidenflation continues to destroy Americans’ purchasing power. And Americans will still be dealing with unaffordable prices for a long time, even if year-to-year CPI increases begin to slow gradually in comparison to the months starting in April 2021 when Bidenflation began to take hold.

Democrats control both the White House and the two chambers of Congress – although not “all three branches of government” as the president mistakenly said. Fortunately, the Democrats do not control the Supreme Court but would like to change that as soon as they can by packing the Court with ultra-progressives.

Although admitting that “we’re in power,” President Biden continues to look for scapegoats.

“There are two leading causes of inflation we’re seeing today. The first cause of inflation is a once-in-a-century pandemic,” President Biden said during his prepared remarks on May 10th. “And this year we have a second cause — a second cause: Mr. Putin’s war in Ukraine.”

Many Americans are not buying these tiresome excuses.

So, President Biden added his favorite bogeyman to deflect blame from himself – “Ultra-MAGA” Republicans. The president came up with the phrase “Ultra-MAGA” all by himself, according to his out-going press secretary Jen Psaki.

President Biden aimed his partisan fire at Florida’s Republican Senator Rick Scott, whom the president mistakenly said was from Wisconsin.

President Biden repeated the lie for which he had already earned three Pinocchios from the Washington Post when he first started spreading it in April. He falsely claimed that Senator Scott’s own individual ‘11-point plan to rescue America’ constituted the “Ultra-MAGA” agenda of the congressional Republicans.

What caught the White House’s eye in particular was Senator Scott’s personal idea of having all Americans pay even a small amount of income taxes to “have skin in the game.” President Biden and his team continued to characterize this suggestion of Senator Scott’s as the official congressional Republican position even after Senate Minority Leader Mitch McConnell had unequivocally rejected it the month before.

“Let me tell you what would not be a part of our agenda:” Senate Minority Leader McConnell said, in commenting on Senator Scott’s proposal in the event that the Republicans take back the Senate in the midterm elections. “We will not have as part of our agenda a bill that raises taxes on half the American people and sunsets Social Security and Medicare within five years.”

In case anyone missed his rejection of Senator Scott’s plan, Senator McConnell added, “That will not be part of a Republican Senate majority agenda. We will focus instead on what the American people are concerned about: inflation, energy, defense, the border, and crime.”

In awarding the three Pinocchios, the Washington Post article explained that Senator Scott’s “snippet of an idea, such as it is, cannot be labeled a ‘congressional Republican’ plan. No legislation has been crafted, and no other Republican lawmakers have announced their support.”

Nevertheless, President Biden trotted out the same disinformation during his May 10th remarks. He tried again to mislabel Senator Scott’s own ideas, which the senator has since revised in any event, as the “congressional Republican agenda.” Biden doubled down further on this lie during his remarks to the Democratic National Committee fundraiser on May 11th.

On May 12th, the Washington Post fact-checker stated: “We reaffirm our rating of Three — nearly Four — Pinocchios.”

When not lying outright, President Biden tends to mislead the American people with half-truths.

For example, President Biden boasted that “the deficit has gone down both years I’ve been here.” What the president left out was the fact that the national federal debt as a whole has climbed sharply on his watch due to the spendthrift policies of the Biden administration and the Democrat-controlled Congress.

President Biden was either confused or was deliberately trying to mislead the American people when he conflated cutting the deficit with cutting the current amount of the total federal public debt.

“The bottom line,” President Biden said, “is: How much does America owe? How much in the hole are we going? We’re reducing that.”

No, Mr. President, you are not reducing how much America owes overall. The federal public debt is still growing at an unhealthy pace even with some periodic deficit reductions.

With interest rates beginning to rise sharply as the Federal Reserve tries to tame Bidenflation, federal spending on interest will increase too and add even more to the national public debt.

President Biden conveniently left out that part of the story in his boast about cutting the deficit.

The president also told a half-truth when he criticized oil companies for simply sitting on 9,000 unused oil leases on federal property and supposedly pocketing their profits instead. The president neglected to mention the barriers to drilling, production, and building out of infrastructure such as port facilities and pipelines, which his administration’s anti-fossil fuel policies have created.

These barriers include onerous regulatory burdens and policies designed to discourage capital investments in fossil fuel production and infrastructure. On top of that, President Biden’s budget includes multiple tax increases on the oil and gas industry and increases in other corporate taxes, some of which will end up being passed on to consumers in the form of higher prices.

President Biden has no plan to solve the mounting inflation problem. All he does is to shift blame from himself, lie to the American people, and build back on his already failed economic and anti-fossil fuel policies.

Will the Supreme Court Decision Force Young Women to Confront Sexual Reality? Could it just…