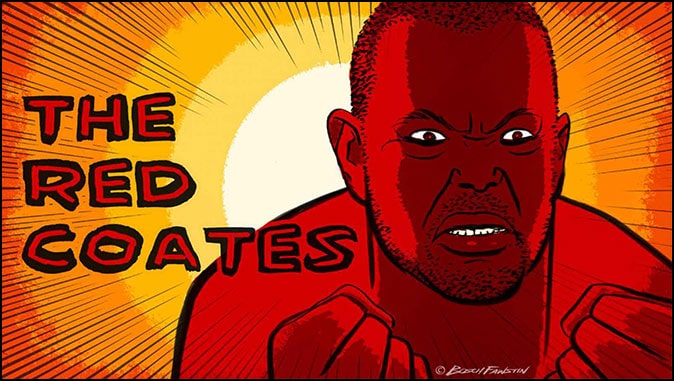 Racist, anti-American leftist, Ta-Nehisi Coates, who “felt nothing” while watching the Twin Towers burn, and who writes a superhero whom he’s completely unfit to write, Captain America, decided to make Cap’s arch-enemy, the Red Skull, say things similar to what bestselling clinical psychologist Jordan Peterson says. Now, why would Coates do that? For the same reason that leftists NEVER call Nazis by their proper name, National SOCIALISTS. Coates did this in order to perpetuate the 70+-year lie that Nazis were not socialists, but right-wingers.

The leftist Hitler said, “I have learned a great deal from Marxism.” And differences with the communists, he explained, were less ideological than tactical. German communists he had known before he took power, he told Hermann Rauschning, thought politics meant talking and writing. They were mere pamphleteers, whereas “I have put into practice what these peddlers and pen pushers have timidly begun,” adding revealingly that “the whole of National Socialism” was based on Marx.

That’s from a 1998 article that leftists wish didn’t exist, “Hitler and the Socialist Dream.”

And as I’ve put it: Nazism, Socialism, Communism, and Fascism all have the same base. They’re all leftist, collectivist, totalitarian, anti-Freedom, anti-Capitalist ideologies. The hatred between Nazis and Communists was a hatred akin to the one between Sunni and Shiite Muslims. It’s all the same base, but each gang thinks that theirs is the best version of totalitarianism, and they can’t live with rivals.

And of course, according to the “WE’RE Not Nazis, YOU Are!” leftists, the ONLY problem with Ta-Nehisi Coates comparing Peterson to the Nazi Red Skull is that Peterson has taken exception to it.

Also, it’s bad enough that the leftists at Marvel hired the racist anti-American to write their non-racist patriot, Captain America, but DC has now hired Coates to write its new Superman movie. The only thing I need to know about Coates is that he wrote in his pretentiously-titled, navel-gazing book, Between the World and Me, regarding the heroic police officers and firefighters of the 9/11 attacks:

“They were not human to me. Black, white, or whatever, they were menaces of nature; they were the fire, the comet, the storm, which could- with no justification- shatter my body.”

He had the gall to bitch and moan in his book about how his body could be shattered by those whose bodies were actually shattered while they tried to save lives. And their bodies were shattered by jihadists whom Coates would never utter a negative word against. And how could it be that his editors and publisher would allow such an evil passage to remain in his book? Because of his leftist/black privilege. They were afraid to edit it out because they might be called racist.

And people still use the phrase “white privilege” with a straight face, when anti-white privilege is the true privilege. It’s a disgrace to have such a moral cretin get his hands on American icons like Captain America and Superman, who represent everything that Coates spends all of his time trying to tear down, all while getting paid for it. A Disgrace. And of course, being a racist who hates whites, rumor is that the Superman Coates is writing about will be black.

And while Coates is a pro-black/anti-white racist, his true color is red, like the Red Skull. It’s no accident that the color of the National Socialist Red Skull is red, which is the color of socialism, and the color of the ocean of blood it has spilled, and continues to spill, which all socialists, even those who still claim to be benign, are indifferent to.