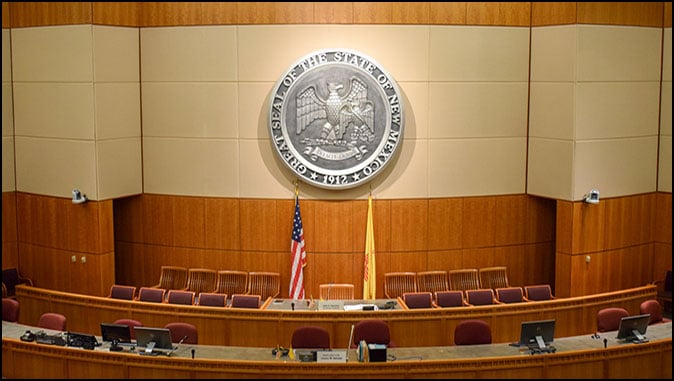 The Racist From the Council For Racial Justice Cried Racism and Stole From Black Children
New Mexico’s House Majority leader took from schools to give to her Caribbean restaurant.
By Daniel Greenfield

Daniel Greenfield is a Shillman Fellow at the David Horowitz Freedom Center.

“I believe that we should ask not what people can do for you, but what you can do for the people,” Rep. Sheryl Williams Stapleton.

Drive down Central Avenue in Albuquerque, stop by A Taste of the Caribbean, and you can get a mac & cheese with jerk chicken, ackees and saltfish, or you might run into law enforcement agents with search warrants targeting the owner and New Mexico’s House Majority Leader.

Rep. Sheryl Williams Stapleton is a renaissance woman who goes by different names and combines a variety of careers that are as garish and bewildering as her signature hats, often purple, her favorite color, and spangled with stars.

You can find the state’s longest-serving Democrat legislator at her Caribbean restaurant, her Albuquerque Public Schools office, also targeted in the search warrant, where she still works and pulls down a salary, or, according to the allegations, the Ujima Foundation, named after one of the principles of Kwanzaa, or at her new role serving on the governor’s Council For Racial Justice.

“The system will not reform itself,” Governor Michelle Lujan Grisham had warned when announcing her racial council.

Rep. Stapleton’s role on the council created after George Floyd’s drug overdose death, proves her point. The systemic racism, which Grisham claimed needed to be fought through a “Czar” of “racial justice” isn’t real, but systemic political corruption is all too real and often perpetrated by minority leaders at the expense of the minority groups they claim to be fighting for.

The ‘Center’ has been closed since the pandemic, but has taken the time to advocate for turning D.C. into a state and for creating a cabinet position with a “racial justice mandate”.

“The fact that an African American male was killed, murdered, in sight of the whole world, created the atmosphere for the world to say: Enough is enough,” Rep. Stapleton had declared at the creation of the Racial Justice Caucus which thus far seems to have done nothing.

The ‘Enough’ moment came her way with the search warrants investigating the fortune rolling out from the Albuquerque Public School to Robotics Management Learning Systems in Washington D.C. and then allegedly back to the former chair of the Democrat Party through, among others, payments made through A Taste of the Caribbean.

Rep. Stapleton had already been accused of “double dipping”, being paid by taxpayers on both ends, working as an elected official in Santa Fe and for the Albuquerque Public Schools on the same days. But the last time a Latina Republican elected official had complained about it, the future member of the Council for Racial Justice hollered, “You’re carrying the water for the Mexican on the Fourth Floor!” By that she meant former Governor Susana Martinez: a Republican. Asked to apologize, Stapleton argued that she couldn’t be accused of racism because she was also a “Latina” insofar as she was originally a Caribbean immigrant.

Meanwhile students at the Albuquerque Public Schools went on failing.

As one site notes, “21% of students are at least proficient in math and 30% in reading.”

APS has been pushing critical race theory into schools even while officials issued denials.

Between 2006 and 2021, $5.3 million went from APS to Robotics Management Learning Systems which was supposed to be helping students learn. Most of those invoices, year after year, were for $40,000, no cents or untidy uneven numbers, and allegedly, $954,386 was paid by Robotics back to Rep. Stapleton’s Carribean restaurant, two African foundations and other organizations. Year after year, the kids were short changed and Rep. Stapleton got richer.

By the time the pandemic and actual classes were replaced with useless remote learning under pressure from corrupt teachers’ unions, like the American Federation of Teachers, of which Rep. Stapleton is a member, the results were so catastrophic that in one New Mexico community as many as 80% of high school students were failing at least one class.

Robotics had been supplying a “web-based learning program” through the Performing Arts Center meant for black students.

Online learning remains highly controversial, but as an elected official, Rep. Stapleton kept fighting for more money for programs that were supposed to be helping students, when they were actually shortchanging black students and helping her get rich

Rep. Sheryl Stapleton’s whole claim to fame had been as a teacher.

She had started out as an elementary school teacher at APS before becoming the vice chair of the New Mexico Democrat Party (the vice part being all too appropriate) and then the chair. She was elected to the state House of Representatives and then became a majority whip, a minority whip, and finally the majority leader while the media gushed over historic moments and glass ceilings broken. But the only things really being broken were trust and school bank accounts.

By the time Rep. Stapleton became valuable to Robotics, she wasn’t just a teacher, but was working as a coordinator and director of Career and Technical Education at APS and had a major legislative role allowing her to control both sides of the money game.

Robotics was getting most of its money from APS, and Rep. Stapleton was getting her money from Robotics through everything from her restaurant to an alleged Carribean bank account.

Rep. Stapleton kept signing Robotics invoices and looking over the shoulders of anyone who questioned the payments. Then she cashed the checks for the invoices she was approving.

As an elected official, Rep. Stapleton pushed legislation for the very programs that she was administering and benefiting from. The perpetual motion conflict of interest machine had her funding programs legislatively, approving payments administratively, and then depositing the checks that were being sent as a result of her efforts in local banks.

Sheryl did it all.

The scam fell apart when someone called the Robotics number and got a personal voicemail, and then noticed that its actual address wasn’t in D.C., but a P.O. Box in Albuquerque. The checks being sent to Robotics kept being deposited in Albuquerque banks and a bank surveillance camera caught Rep. Stapleton personally depositing the APS checks to Robotics.

After 30 years, making her the longest serving Democrat in the New Mexico legislature, Rep. Stapleton’s record career may finally be coming to an end. But between her restaurant, the foundations, and a center named after her, she has plenty to fall back on.

Whatever the outcome of the investigation, APS will continue to fail students and taxpayers. And similar arrangements, usually more sophisticated and legal, are routine in public school systems across the country where politicians and administrators also act as lobbyists and consultants. America spends a vast fortune on education that goes into their pockets.

Rep. Stapleton dreamed too big, aimed too high, and her alleged corruption was too obvious. The bones of this nation are being picked clean by more cautious public servants.

“Some people are concerned about being important, we can all be important, but we cannot all serve the public. I have chosen to be a public servant rather than be important,” House Majority Leader Rep. Stapleton states on her site.

We cannot all be public servants and that is something to be deeply grateful for. One Rep. Stapleton is bad enough: a million of them would be a catastrophe that no nation could survive.