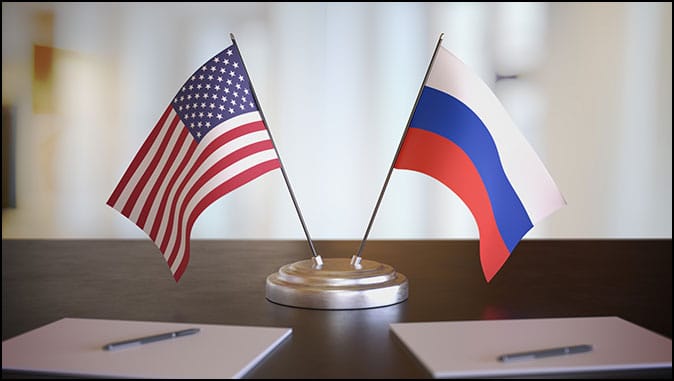 The Pathetic Putin-Biden Summit
A U.S. president mangles his first major leadership test on the world stage.
By Joseph Klein

President Joe Biden met with Russian President Vladimir Putin in Geneva on June 16th and came away empty-handed. They agreed to have their minions meet for future talks on cybersecurity and other contentious issues between the two countries.

“Earlier today, President Biden and Russian President Vladimir Putin finally met for their big summit in Geneva,” Jimmy Fallon said on Wednesday’s Tonight Show. “When Biden said ‘I’ll give you my email,’ Putin said, ‘I already have your email — and password and Venmo, don’t worry about it.'” That’s about as good a commentary as any on the insignificance of this summit.

At least prior to former President Donald Trump’s first summit with Kim Jong-un, the North Korean dictator released three American hostages who had been held for months in North Korea’s inhuman labor camps. This time, Putin didn’t even release the two former U.S. Marines imprisoned in Russia, Trevor Reed and Paul Whelan, as a symbolic gesture to reciprocate for Biden’s waiver of the Nord Stream 2 sanctions. Russia’s release of the American hostages should have been Biden’s minimum condition for holding the summit in the first place.

All that Biden’s summit meeting with Putin accomplished was to give Putin a platform on the world stage where he appeared far more energetic and confident than Biden. It’s very troublesome — and embarrassing — when the leader of the free world takes fewer than half the questions from the press following the summit meeting than Putin took at his separate press conference. And Biden grew testy at his own solo press conference when the last questioner — from CNN, no less – asked Biden how his meeting with Putin could be characterized as constructive, given Putin’s past behavior and continued denials of any wrongdoing. “If you don’t understand that, you’re in the wrong business,” Biden barked at the reporter, for which he later apologized.

Putin and Biden had some nice words to say about the summit and about each other. However, Putin remained defiant in denying that any Russians were responsible for the cyberattacks launched against government and business sites in the United States. Thinking that the “best defense is a good offense,” Putin used his solo press conference to charge that the United States was responsible for far more malicious cyberattacks.

In addition to waving off criticisms of human rights abuses in Russia at his press conference, Putin also turned the tables on Biden. He mentioned, for example, the Black Lives Matter protests and Guantanamo in his negative portrayal of the United States. As former Secretary of State Mike Pompeo observed, Putin “was allowed to go up there and spout Russian propaganda to create the context for moral equivalence between the United States and Russia on every front.”

Biden said at his press conference that he provided Putin with a list of “16 specific entities, 16 defined as critical infrastructure,” including the energy sector and water systems, that were considered off limits to cyberattacks. Biden added that he told Putin “we have significant cyber capabilities” and that the U.S. would respond “in a cyber way” if Russia violates “these basic norms.”

Biden’s statements regarding cyberattacks raise at least two questions. What types of “entities” were not included in Biden’s list and thus presumably not considered off limits? And why hadn’t Biden already demonstrated to Putin how he would respond “in a cyber way” to previous Russian cyberattacks, such as SolarWinds and the ransomware attacks on the Colonial Pipeline and JBS, the world’s largest meat supplier? Actions speak louder than words. Instead, Biden has provided Putin with a potential roadmap of targets for Russia’s hackers to exploit.

Biden speculated that Putin’s Russia could be influenced by whether or not other countries believe Russia’s behavior complies with so-called international norms. “What will change their behavior is if the rest of world reacts to them and it diminishes their standing in the world,” Biden told reporters. That is naïve at best. Putin is motivated only by his accumulation, maintenance, and display of raw power. Putin is perfectly happy to consort with other like-minded dictators who share his contempt for Western democratic values.

Germany certainly did not have the free world’s broader interests in mind when it agreed to purchase natural gas from Russia, delivered via the Nord Stream 2 gas pipeline that runs from Russia to Germany. Ukraine was left out in the cold. Biden was so anxious to please Germany that he waived sanctions on the company building Russia’s Nord Stream 2 gas pipeline to Germany and on its chief executive Matthias Warnig, a Putin ally. Warnig is a former member of Communist East Germany’s Stasi secret police. At the very least, the sanctions imposed on Warnig should not have been lifted. But Biden was too afraid of offending Germany.

In his remarks to the press on the tarmac before departing on Air Force One, President Biden inadvertently revealed what is fundamentally wrong with his foreign policy. “You know, one of things that I think, understandably, there was a good deal of skepticism about: would the G7 sign on and give America back it’s, sort of, leadership role,” Biden said. “I think it did.”

The United States does not need the blessing of the G7 or of any other multilateral group to continue leading the free world against Russia, China, Iran, North Korea, and other aggressive dictatorships. The United States is still the world’s most powerful nation, both militarily and economically. It also remains the world’s beacon of hope for freedom-loving people everywhere. Unfortunately — and tragically — American now has a president who is groveling for approval from other countries and globalist gatherings.