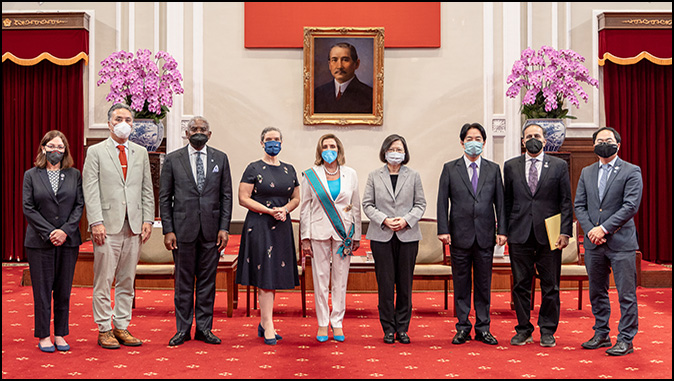 The Only Dangerous Thing About Pelosi’s Taiwan Visit is Her Boss’s Cowardice
China picked a fight over Pelosi to test Biden. And he failed.
By Daniel Greenfield

If you believe the Biden administration and its media allies, members of congress visiting Taiwan is a shocking and unprecedented event. Except that Senator Tammy Duckworth visited Taiwan in May. Senator Richard Burr, Robert Menendez, Lindsey Graham, Ben Sasse and Robert Portman came in April. Along with Rep. Ronny Jackson

Thanks in part to the Taiwan Travel Act, which passed with no opposition and was signed by President Trump in 2018, Taiwan is Grand Central Station for congressional delegations.

Pelosi is higher-ranking only in that she’s the outgoing lame duck leader of a vanishing majority.

China was not threatened by Pelosi’s visit. It chose to exploit it as an opportunity to intimidate the Biden administration and blackmail its weak enemies. And whatever else happens, it succeeded in exposing once again how worthless Biden’s tough talk about Taiwan is.

“Are you willing to get involved militarily to defend Taiwan?” Biden had been asked at a press conference with the Japanese prime minister.

“Yes,” he assured. “That’s the commitment we made.”

“We made a sacred commitment to Article 5 that if, in fact, anyone were to invade or take action against our Nato allies, we would respond. Same with Japan, same with South Korea, same with Taiwan,” Biden had promised.

NATO, Japan and South Korea must be feeling pretty good now that the Biden administration announced that it doesn’t recognize the existence of Taiwan after spending a week trying to pressure his own party’s House Speaker out of paying a visit to the independent nation.

But this is the same administration whose secretary of state had tweeted, “We stand with the people of Hong Kong & continue to support their human rights & fundamental freedoms”.

And then deleted it.

Last year, Secretary of State Blinken warned Communist China that an invasion of Taiwan would result in “terrible consequences”.

“We’ve been very clear and consistently clear, over many years that we are committed to making sure that Taiwan has the means to defend itself,” he vowed. “We will continue to make good on that commitment.”

The Trump administration had approved nearly $1 billion in arms sales to Taiwan in its first year in office comprising everything from coastal defense systems to submarine torpedoes to drones and aircraft parts. The Biden administration’s approval of arms sales has currently focused on a much narrower sale of artillery. There’s a $14 billion backlog in delivering equipment that Taiwan already purchased including 66 F-16 jets that are crucial for defending against China’s aerial incursions.

Pelosi’s visit resulted in reports of China’s SU-35 jets crossing the Taiwan strait and military exercises, which the brutal Communist dictatorship refers to as “military operations”, entering Taiwan’s territorial waters. While the Biden administration had put on a show of talking tough last year, Chinese pressure immediately sent Biden and his cronies into a cowardly panic.

Biden claimed that “the military thinks it’s not a good idea right now”, as if the military sets foreign policy and tells elected officials what to do, instead of the other way around.

Administration officials began working the phones, calling every reporter in D.C. and Manhattan to dish on what a terrible idea Pelosi’s trip would be. And the more Communist China threatened, the harder Biden appeased.

In the days before the visit, the media was filled with administration hit pieces aimed at the woman who is third in line for the presidency. Pelosi was getting the Trump treatment.

“The damage from Pelosi’s unwise Taiwan visit must be contained,” the Washington Post’s editorial board warned. The board’s position was understandable considering that the paper is owned by Jeff Bezos whose vast fortune comes from Amazon’s third party Chinese sellers ripping off American products and then dumping them in this country.

But the Post was also closely echoing the Biden administration.

At the New York Times, Paul Krugman launched his attack headlined, “Why Pelosi’s Visit to Taiwan Is Utterly Reckless”. Coincidentally, “reckless” was how China’s Ambassador Qin Gang had described the visit to CNN. Or maybe not so coincidentally after all since so many of America’s headlines are actually translated from the original Chinese.

There’s nothing reckless about the visit.

American politicians regularly visit Taiwan. Six senators have visited just this year. Neither of the major papers campaigned against the Taiwan Travel Act. Nor did they condemn the series of congressional delegations that have been visiting the Republic of China. Until now.

But when China exercised its heckler’s veto, the Biden administration ran to duck and cover. And the media suddenly decided that visiting Taiwan was suddenly very dangerous business.

Communist China is likely to invade Taiwan. It will do so irrespective of whether a daffy California congresswoman sets foot in it or not. Beijing knows that Pelosi doesn’t set foreign policy. It has too many spies here and has corrupted too many of our officials, from Biden on down, not to know how the game is played on this side of the ocean.

China chose to pick this fight over Pelosi because it could make Biden blink. And he blinked.

Biden didn’t just turn on Republicans when China bellowed, he went after one of his closest allies in a desperate bid to do Beijing’s bidding. And the media, which joined Xi’s chorus, showed that its only allegiance is to protecting the Biden administration and kowtowing to China.

Speaker Pelosi certainly didn’t set out to demonstrate all that. Unintentionally she did.

The otherwise forgettable trip became another warning that America could not be counted on and that any of the assurances coming out of the White House are worthless. Taiwan can’t count on American military intervention. It can’t even count on the delivery of the arms that it already purchased and needs in order to defend itself against Hunter’s business partners.

Many protest that the United States shouldn’t be in the business of defending Taiwan. There’s a legitimate debate to be had there, but just as with Ukraine, Biden is in the business of talking tough until the shooting starts and then he runs away. And that’s the worst of both worlds.

If China believes that American military intervention is a possibility, it would be much less likely to invade Taiwan. The Biden administration repeatedly threw away the country’s strategic ambiguity, talking tough about militarily defending Taiwan, only to panic at China’s threats.

America’s enemies keep testing Biden. What appear to be crises are often just tests by China, Russia, Iran, and other enemies to see how far the United States can be pushed. And the latest answer is that Biden can be pushed by China into turning on his closest allies.

If Biden won’t even defend Pelosi from China, what are the odds he’ll defend Taiwan? None.