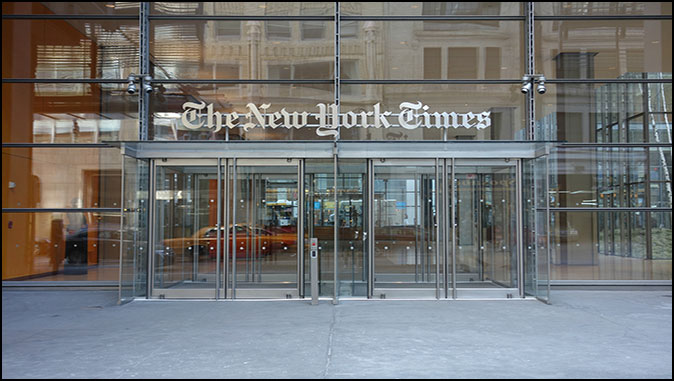 The NY Times Keeps Failing to Vet Its Middle Eastern Hires
Closed eyes when hiring reporters on Israel and the Palestinians.
By Hugh Fitzgerald

It’s comical, really. The New York Times keeps being gobsmacked by revelations about the people – that is, those who are Arabs – whom it hires to report on Israel and the Palestinians. Though very rich and very powerful, the Grey Lady, the “newspaper of record,” seldom bothers to perform due diligence before it employs these reporters and photographers to cover such a fraught subject; it is only after these people have been hired, when Honest Reporting, the NGO that “monitors the media for bias against Israel,” discovers their self-incriminating posts on social media, containing praise of terror groups, expressing admiration for Hitler, calling for the murder of all Israelis, from babies to the elderly, that The Times is then shamed into cutting its ties to those who have written these posts. And this keeps happening at the Times – first, the lack of any investigation, prior to hiring, of the social media posts of these Palestinian reporters and photographers, second, the exposure by Honest Reporting of those posts, third, the embarrassed firing of those who have been found out – it seems there is no end to this.

A few months ago, Honest Reporting investigators provided an overview herejust how careless the Times has been. In recent months, the New York Times has had to cut its ties to Hany Hanona, a photographer and “fixer” in Gaza, when Honest Reporting revealed that he had called for murdering all Jews and expressed his desire to do as Hitler did. In his posts, Hanona wrote that he supported “the culture of fighting and killing Israelis. I don’t accept a Jew, Israeli or Zionist, or anyone else who speaks Hebrew. I’m with killing them wherever they are: children, elderly people, and soldiers.” He also wrote that “Jews are sons of the dogs…I am in favor of killing them and burning them like Hitler did. I will be so happy.”

He removed his posts when Honest Reporting first made them public; unfortunately for Hanona, though he tried to cover his tracks, Honest Reporting had captured those posts in screenshots. The Times had little choice, given what he had written; it had to let him go.

Another New York Times freelancer, videographer Soliman Hijjy, worked on several of the New York Times’ “visual investigations,” including “Gaza’s Deadly Night: How Israeli Airstrikes Killed 44 People,” a slanted June 2021 video that was the subject of an Honest Reporting critique.

Soliman Hijjy was hired by The New York Times even though his hatred of Jews and the Jewish state may well have impaired his ability to carry out assignments — which included selecting “potential interview subjects and witnesses” — without bias.

For example, in November 2012, Hijjy praised Adolf Hitler on Facebook. “How great you are, Hitler,” he wrote on the social media site, sharing a meme featuring the Nazi mass murderer. Six years later, on December 26, 2018, he doubled down: in a caption accompanying a picture of himself, Hijjy stated he was “in a state of harmony as Hitler was during the Holocaust.”

These posts were easy to find, but apparently not easy enough for the New York Times.

Another hire insufficiently investigated by the Times was Hosam Salem, who worked as a photographer for The New York Times since 2018. While working for mainstream outlets, Salem publicly glorified Palestinian terrorist attacks that killed a total of at least 35 innocent Jews, Muslims, and Christians. The New York Times freelancer has rejected appeals to end the bloodshed, while he explicitly rebuffed any possibility of peace with Israel.

In 2011, Salem took to Facebook to praise the Jerusalem bus bombing in which British Christian evangelical student Mary Jane Gardner was murdered, and 67 others were injured. Members of the Hamas cell had reportedly planned an additional attack but were stopped by Israeli security forces.

During 2014’s Operation Protective Edge against Hamas in Gaza, Salem used his profile to hail the terrorist organization’s capturing and killing of IDF soldier Oron Shaul. For more than eight years, Hamas has held on to Shaul’s body, using his remains as a bargaining chip to secure the release of Palestinian security prisoners jailed in Israel.

Around the same time, Salem mourned Salam Maher al-Madhoun, a Hamas operative sent to carry out a mass killing in the southern Israeli community of Nir Am. Al-Madhoun’s terrorist cell managed to kill four IDF officers and soldiers before being neutralized.

On November 18, 2014, Hosam Salem again used Facebook to express his joy over the massacre of four rabbis and an Israeli-Druze police officer in a synagogue in the Jerusalem neighborhood of Har Nof.

Citing the Quran, he encouraged his followers to “smite the necks” of unbelievers, adding: “[This is the] summary of the Jerusalem operation [sic] today.”

In 2015, Salem applauded two acts of terror: a shooting at the Gush Etzion Junction that killed an American teenager, an Israeli man, and a Palestinian bystander; and a Jerusalem stabbing that killed three.

Some three years later, after being hired by the New York Times, Salem called for more violence following an attack that killed two IDF recruits in the West Bank. “Shoot, kill, withdraw: three quick operational steps…to bring peace to the hearts of sad people like us,” the inciting post read.

Finally, he has repeatedly eulogized Mohammed Salem and Nabil Masoud. The two were responsible for a 2004 suicide bombing that killed ten workers at the Ashdod port, Israel’s second-busiest harbor (see here and here).

Same script for Hosam Salem as with Hany Hanona and Soliman Hijjy. Honest Reporting reveals his social media posts; the New York Times, embarrassed and chagrinned, has to let him go.

The New York Times could have discovered, before it hired them, the Facebook and Twitter posts by all three: Hady Hanona, Soliman Hijjy, and Hosam Salem. The paper has five thousand employees. Honest Reporting has fewer than fifty. Why can’t the Times properly vet those it intends to hire? Does it now recognize that it has a special problem with candidates who are being considered for reporting on Israel and the Palestinians?

There has been a great deal of surprise and confusion in the American press over the results of the recent Israeli elections. Pundits and self-styled “experts,” as well as liberal American Jews, seem to be having trouble grasping why Israeli voters turned so decisively towards parties on the political right. Well, one need no look further than the Nov. 19 edition of The New York Times for the answer.

From the headline on page 10, one would not think the article had anything to do with Israel.

“Blaze in Gaza Strip Kills 21 Gathered for Family Party,” it announced. Correspondent Raja Abdulrahim began by describing, matter-of-factly, the circumstances surrounding a fire that tragically engulfed the entire top floor of a building in the northern Gaza neighborhood of Jabaliya.

Then Abdulrahim suddenly pivoted and pointed an accusing finger at Israel. She cited claims by Hamas that Israel prevents Gaza from importing adequate firefighting equipment. “Israel’s civil administration… controls the civilian aspects of Israel’s presence in the occupied territories, including Gaza and the West Bank,” she wrote.

Clearly the point of that sentence was to establish that Israel must bear some of the blame for the fire because Israel “controls” Gaza, at least to some extent.

Except that it doesn’t.

Yes, the civil administration still operates in the parts of Judea and Samaria that Israel rules, but not in Gaza.

Now look again at the way Abdulrahim constructed her sentence: “Israel’s civil administration… controls the civilian aspects of Israel’s presence in the occupied territories, including Gaza and the West Bank.”

By blurring “Gaza and the West Bank” together, as if they are a single unit, Abdulrahim created the false impression that the Israeli civil administration still has some control in Gaza, since it operates in part of “the West Bank.”

But Israel does not control Gaza. In 2005, every single Israeli, whether civilian or soldier, was pulled out of Gaza. Israel plays no part in the government of Gaza, which has been ruled by Hamas since 2007. Hamas is lying: Israel does not prevent Hamas from importing fire-fighting equipment. It is Hamas that chooses to spend so much of its money on weapons and on. building a vast underground network of terror tunnels, rather than on fire-fighting equipment. Israel has never objected to Palestinians in Gaza possessing such equipment, and Hamas knows this perfectly well. And so, I am sure, does Raja Abdulrahim.

From Abdulrahim’s previous dispatches for the Times, it is clear that she has visited Gaza. That means either she is suffering from hallucinations that Israel is “controlling” things there, or she is fully aware that it is not, but wants to give the impression that it is in order to blame Israel for the Gaza fire.

Either of those two possibilities should be grounds for immediately firing her.

Not that Ms. Abdulrahim’s journalistic misbehavior relieves her editors of any responsibility. After all, they knew what they were getting when they hired her earlier this year. She had previously received awards from the anti-Israel organization CAIR after she wrote a letter denying that Hamas and Hezbollah are terrorist organizations….

Before hiring Ms. Abdulrahim, The New York Times should have known that she had received an award from CAIR, an unindicted co-conspirator in the Holy Land terrorism trial. Shouldn’t that have set off alarm bells at the Grey Lady? Why didn’t the Times do a little Internet searching before hiring her? Had it done so, the newspaper would soon have found her letter denying that either Hamas or Hezbollah was a terror organization. And now that it has this information-about her stout defense of Hamas and Hezbollah, and Abdulrahim’s resulting award from CAIR, it is even more disturbing that the Times continues to employ her.

Israel’s electorate has turned rightward, as Stephen Flatow says, in part because the “international community” refuses to treat it fairly. For evidence, see the endless series of anti-Israel resolutions that are adopted by UN Human Rights Council and the UN General Assembly — Israel at the UN is always in the dock at the kangaroo court of the UN, where more resolutions are passed against the Jewish state than against all the other 193 countries put together. The latest outrage was the creation, in May 2022, of an International Commission of Inquiry to investigate violations of international humanitarian law and all alleged violations and abuses of international human rights law by Israel in the “Palestinian territories.”

And the Israeli electorate has turned rightward, too, because it is tired of the grotesquely unjust treatment of the Jewish state by the mainstream media all over the world, as exemplified by the New York Times, which has proven itself incapable of reporting on it fairly. If Honest Reporting did not exist, we would likely still be reading reports on Israel and the Palestinians by people who admire Adolf Hitler and wish for the destruction of the Jewish state. Honest Reporting has managed to embarrass the Times into cutting ties to Hany Hanona, Soliman Hijjy, and Hosam Salem. Now we shall wait, and wonder, why the Times continues to employ as a reporter on Israel and Palestinians the recently-hired Raja Abdulrahim, who turns out to be a defender of Hamas and Hezbollah.

I suspect that the Times doesn’t think there’s anything wrong with that. And that is exactly what is wrong with the New York Times.