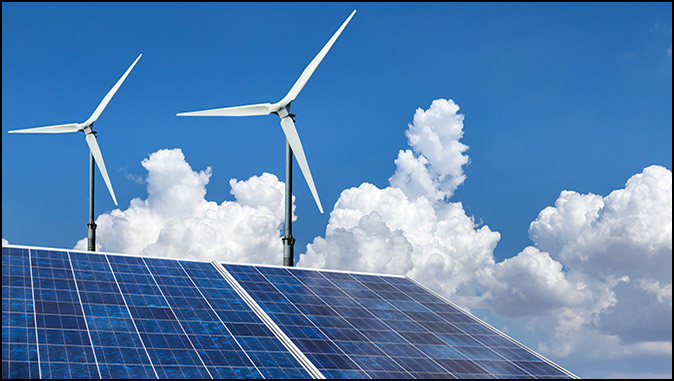 The Myth of Clean
Clean garbage, clean energy and a dirty utopia.
By Daniel Greenfield

‘Clean’, like ‘smart’, has become the prerequisite for all technology. Both are myths.

Smart technology is surveillance technology. It is not smarter because of its inherent qualities, but because it sends and receives data that allows it to be ‘smarter’ in manipulating users. The smart part of smart technology comes from human beings. So does the stupid part when people sacrifice their privacy and independence for the benefits of technology being shaped to them.

Clean energy is even more of a myth. The Inflation Increase Act doles out another stream of billions toward the inefficient forms of energy generation that the government has been subsidizing for over 50 years because some Madison Avenue ad agency branded them ‘clean’.

Energy is inherently clean and dirty. Making the inherent forces of the universe useful requires mining metal, cutting down trees, and turning fossil fuels into plastic to assemble machines. Once those machines are running, they will shed heat because ‘clean’ or ‘dirty’, that is how the second law of thermodynamics works. Not even Al Gore can evade entropy and not even the shiniest solar panel, sleekest wind turbines or smoothly humming Tesla will prevent energy from being wasted as it is transferred, stored or used to do one thing or another locally or nationally.

The only truly energy efficient energy comes from bioluminescent creatures like fireflies. We didn’t make them and despite all the boasts from technocrats, we can’t duplicate them.

Clean energy depends on massive rare earth mines run by Communist China that poison everything around them. Wind turbines require huge amounts of balsa wood that are deforesting the Amazon. Neither turbines nor solar panels are recycled when they go bad. They end up in landfills and become toxic waste. Breathing in fiberglass from severed wind turbines or drinking water tainted with heavy metals from solar panels is a serious health hazard.

Much of the clean garbage that we call ‘recycling’ also ends up in landfills. The difference between dirty garbage and clean garbage is that we send some of the clean garbage off to China or third world countries where it’s recycled under primitive conditions and then shipped back to us. That is until China cracked down on the toxic hazards of the recycling industry and began refusing much of our clean garbage which now goes into equally clean landfills.

There was nothing environmentally sound about sending pizza boxes or coke bottles halfway around the world. An article described a Chinese city where plastic was recycled as a “dead zone” with “nothing green” where “sheets of corrugated plastic boxes, old plastic barrels, and giant dried puddles of plastic” are shredded, “poured into metal tubs full of caustic cleaning fluid” and then the “excess trash and cleaning fluid” is “tossed into a waste pit on the edge of town.”

That’s the dirty reality behind the recycling triangle and the ads filled with cartoon disposable goods eager to be recycled into new products at the behest of willing children.

The clean part of clean energy or garbage is not in how it’s made, but in how we perceive it.

A solar panel seems aesthetically cleaner than a coal plant. An electric car emits an artificial spaceship hum as it glides down the street. A wind turbine gleams white. Such trivial surface impressions that mistake architecture for the process maintain a trillion dollar scam.

Solar and wind energy systems are presented as more natural than any other kind of energy because the association with the sun and the wind somehow insulates them from the dirty realities of thermodynamics. The design and the branding of solar panels and wind turbines inculcate the myth that they are clean interfaces for receiving this magical bounty for the sky.

The 1960s neo-romanticism rejected the industrial revolution. When the flower children grew up into bourgeois suburbanites, holding down jobs at ad agencies and nonprofits, they wanted a technology that would maintain the same illusion of philosophical consistency. Instead of following through with their principles, they rebranded the industrial revolution to make it much more expensive, less efficient and inaccessible to the dirty working class. The new technology, like their suburban lives, would be morally and aesthetically clean. Like garbage recycled in China and returned in a gleaming bottle of purified tap water, it would make dirty clean again.

Idealists believe that life is black and white, dirty or clean, and that the two can be absolutely separated. The universe does not fall into such neat categories. Nevertheless the Left has spent two centuries tearing apart society in search of a clean utopia. Dirt, coal miners, factories and men who work for a living reek of oppression. When class warfare gave way to green neo-romanticism, the working class was abandoned for a clean post-industrial computerized future. The dirty jobs were outsourced to China while the working class was left with the Rust Belt and meth. America was going to be a clean nation where everyone sat around an Apple laptop before getting into their electric cars and going off for a hike. No smoking allowed.

But what is clean anyway? The old Left used to deplore conflating physical and moral cleanliness only for the new Left to fall into that error anyway. The new master class tells coal miners to learn to code or install solar panels. Like the old elites, its true objection is that they’re dirty. The nonsensical tenets of environmentalism are the aesthetic fetishes of the upper class. They represent a cultural sensibility, not a scientific one. Its vocabulary reeks of escapism from the realities of life, smart technology, clean energy, and information stored in the ‘cloud’.

Technology isn’t magic. The only smarts are human, the only energy is dirty and the cloud is a bunch of servers owned by a global corporation that are powered by coal plants where the constant noise is so loud that employees can suffer hearing damage.

The myth of clean is powered by an escape from reality. That escapism has a high price, not only in the billions wasted and lives ruined by environmentalist gimmicks, but the entire bloody history of the Left which is one long escape from reality into the tyranny of philosopher-kings.

The Left’s energy and its garbage are no cleaner than its ideology and its history. And it is those who are dirtiest on the inside who feel the greatest pathological need to be clean on the outside.