The Myth of a “Palestinian-American” Congresswoman
By Don Feder

The media tell us that Rashida Tlaib (D, MI), who was sworn in on Thursday, is the first “Palestinian-American Congresswoman.” That would make her the first Congresswoman who’s part of a people which does not exist.

We were informed that at the swearing-in ceremony, Tlaib wore a traditional Palestinian costume — which would be what, a dynamite-belt?

Tlaib is a doctrinaire leftist who vows to impeach the president (“And we’re gonna go in an impeach the mother—–“) But forget her deranged politics – most Democrats in the House Pelosi built want to impeach Trump, but describe their mission less colorfully. Focus instead on her alleged identity.

There has never been a state of Palestine. The “Palestinian people” was a creation of Arab propagandists after the Six-Day War. Indigenous Arabs never exercised sovereignty over Israeli territory at any time in the past two millennia.

There is nothing to distinguish the so-called Palestinians from other Arabs. They speak the same language, practice the same religion and have the same customs as Muslim inhabitants of the region’s 22 Arab states. From the Roman occupation in the first century until 1948, Palestine was the name of a land, not a people.

1. Who was the last king of Palestine?

2. Where is Palestine mentioned in the Bible or the Koran?

3. What are Palestine’s chief exports?

4. What are the great works of Palestinian literature, art and music?

5. How many Palestinians have won the Nobel Peace Prize?

The Palestinians are a myth which the mainstream media and political establishment (Republicans and Democrats) never question.

While we are at it, how about taking the Dry Bones “Palestine” quiz? 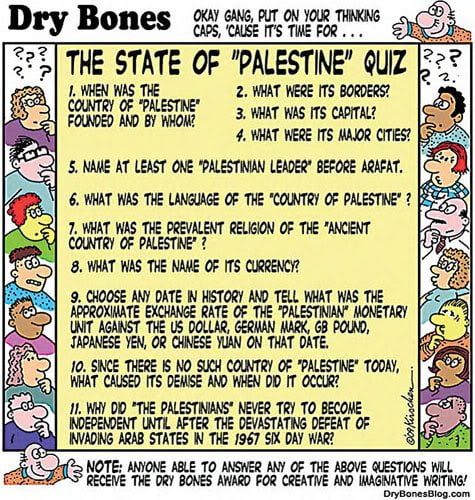 MassResistance statement to our supporters: What should we all do now?

MassResistance statement to our supporters: What should we all do now? January 15, 2021 The…

The Conservative Purge Won’t Stop With Big Tech A great darkness sweeps across the world.…

Twitter's Permanent Ban of Trump Why do Hillary Clinton, Jimmy Carter and Harry Reid get…

Does Telling Muslims to ‘Behave’ Prompt Hatred and Terror?

Does Telling Muslims to ‘Behave’ Prompt Hatred and Terror? A look at assertiveness vs. appeasement.…

The Capitol Hill Riot Was Pelosi’s Fault, Not Trump’s

You Can’t Put This Killer to Death. He Has COVID

You Can't Put This Killer to Death. He Has COVID By Daniel Greenfield Since most…