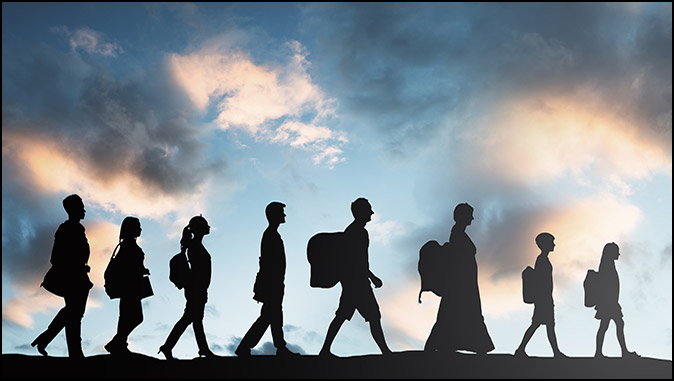 The Moral Case for Ron DeSantis’ ‘Migrant Transports’
Venezuelans brought this crisis on themselves.
By Jason D. Hill

Gov. Ron DeSantis of Florida on Wednesday, September 14, facilitated two flights of approximately 50 Venezuelan migrants to Martha’s Vineyard. This is part of DeSantis’ push to draw attention to the border policies of President Biden.

The commentariat from several sides of the political spectrum have questioned the governor’s motives. Many described it as inhumane and cruel – a form of human trafficking, even.

The moral opprobrium visited upon the governor is fatuous. There is a moral upshot to his actions that few, in their sentimental reaction to the plight of displaced peoples, will bear witness to.

And it is this: the plight in Venezuela is not accidental. It was deliberate, planned and orchestrated by the people of Venezuela. As several economists and political theorists including James Piereson have pointed out, for the majority of the twentieth century Venezuela was one of the most prosperous South American countries. It had a very diversified economy replete with plenty oil reserves that permitted the country to acquire export surpluses. As a result, people there enjoyed a higher standard of living. However, the people of Venezuela elected an authoritarian socialist thug, Hugo Chavez, who ran on a socialist platform. When he won the presidency in 1998, he — like all socialist leaders who rush to nationalize industry — nationalized the oil industry. He levied huge taxes on corporations, and he redistributed land and income across the population. Venezuelans allowed him to revise their Constitution which granted him a longer term as president, and which also gave him more power and gifted what they believed were more positive and social rights to the people.

With rising oil prices during the early years of his regime he increased social spending, indiscriminately distributed not loans, but free money to various organizations and groups. During this period foreigners and foreign corporations began divesting and withdrawing capital from the country. Oil prices decreased—much to the horror of all socialists who, as many economists have pointed out, have little belief in or understanding of the price system. The concept of price fluctuations seems to have bypassed many of them as they were studying high socialist economic theory at the London School of Economics.

Well, we all know the plight of Venezuela. The Great Recession of 2008 saw the collapse of oil prices and the concomitant collapse of the currency, the massive withdrawal of capital, fiscal chaos, and suffering. Chavez’s successor, Nicolas Maduro, passed a law that allowed him to rule by decree and even created the “Ministry of Supreme Social Happiness.” This was a program that allowed the government to indulge in massive and reckless indiscriminate spending via a plethora of social programs.

Whether it is socialist Cuba, Soviet Russia, Cambodia, or North Korea, as socialism makes its pitiful and failed peregrinations around the world, few who are its advocates will bend to reality and see it is a doomed and catastrophic system that also too often relies on the criminalization of dissent.

It is obvious that Venezuelan voters chose their fate and destiny when they elected Chavez. They must reap the consequences they have sown.

The United States can no longer remain indefinitely the dumping ground and a stable source of benefaction for every failed socio-economic and political experiment of countries and their citizens that know better. They willingly ignore the historical record of failed socialist states. They refuse to admit that in the end reality is the final arbiter, and that there is an objective reality that is independent of their wishes, pleas, and desires.

DeSantis, whether he knows it or not, is taking a moral step to teach a vital lesson to all left-wing countries and their foolish citizens who are guilty of the worst form of political calumny. You cannot have your cake and eat it too. You cannot vote to nationalize and exorbitantly tax the brains and minds of your best citizens — which is what it means to nationalize any private industry — and then scream and flee in terror when your victims withdraw the products of their brain – their capital – and leave you to squander in your own ineptitude.

I saw this as a child growing up in Jamaica under the socialist regime of Michael Manley, who nationalized industry and taxed the decency out of remaining entrepreneurs who then fled to Canada and the United States. Jamaica was left with a massive brain drain and an unskilled labor force unable to operate and/or invest in the hollowed-out and gutted industries that went unmanned for years. Eventually the people voted Manley and his regime out of power for a political leader who advocated for and implemented a more market-oriented political economy.

Socialists — and anyone who votes for a socialist is a socialist — are parasites. They have already answered the question: “What exactly is your ‘fair share’ of what someone else has earned?” with a rhetorical gesture — an inverted moral greed of the worst type: a sense of unearned entitlement to the earnings (the thinking) of others.

Any citizen from another country who thinks and endorses a political system that functions on the premise that a human mind can be nationalized and its products redistributed for public consumption has no moral business in the United States where each person is responsible for his or her own fate and destiny. Any refugee or asylum seeker fleeing from a system in which he or she played some role in upholding the belief that the products of one’s efforts belong to the community; that the state and society have a moral and financial responsibility to care for other people’s children; and that the most successful and productive people should be the most penalized precisely for their productive virtues — deserves to be sent back to where they came from and to learn how and why their moral imperative is to start a capitalist revolution in their own country.

The United States has now existed for two-hundred and forty-six years. Citizens of the world have had every opportunity to adduce America as evidence of what works socio-economically, and what will never be more than just high-theory and never a plausible economic system. They should adduce as irrefutable evidence that the United States is the most sought-after country in the world by people seeking to escape the ravages of Third World socialism and the kleptocracy, political repression, corruption and poverty that usually accompany it. Yet some citizens of the world, such as those of Venezuela and Columbia who recently voluntarily elected a left-wing socialist government, wish to place their desires, wishes and willful fantasies above stark economic realities.

For the sanctuary cities here in the United States that claimed that such asylum seekers would find a haven within their realms — what is the problem? Conjoin your actions with your stated values.

At some point it might be cheaper and more moral for the United States to simply take over and colonize those failed socialist states that are economic sinkholes to alter the endless flow of refugees, and to use the resources intelligently and judiciously in such countries to bring them up to a threshold of socio-economic and political decency. That, however, is the subject for another discussion.

For now, let me be clear that I am not making an argument against immigration at all — only that we re-think the governor’s actions in an unsentimental manner. Someone in America must teach citizens of the world that they are accountable for their recalcitrant and reckless governments. If enough refugees get angry, and resentment foments to a boiling point, then we might see more revolutions in countries where deliberately-designed forms of socialism, despotism and usurpation of individual rights are reigning.

The new moral questions that must function as framing devices as we continue the arduous process of developing and re-developing an immigrant policy and, ones that must be posed to refugees and asylum seekers are: why have people in your country (yourself included) allowed economic and political buffoonery, kleptocracy and corruption to supersede a proper rule of law? And: how much longer do you think the United States should be an enabler of bad political behavior and foolish economic policies?