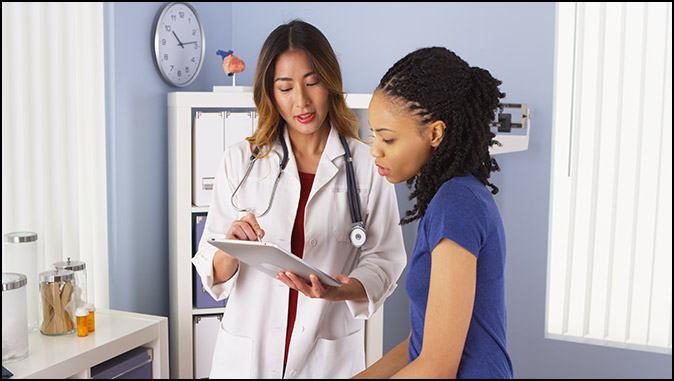 The Medical Community’s Reprehensible March Toward Segregated Medicine
Should black people be treated only by black doctors?
By Christian Watson

The need for someone who “looks like me” has become part of the American psyche. There are tens of thousands of articles about how people of color need someone who “looks like them” if they are to be inspired – or even able to achieve. A lack of “people who look like me” is also used to explain why people of color may receive inferior medical treatment.

This perspective is now found throughout the medical establishment. St. George’s University sums up the belief of many medical schools today. The Medical School states: “When a patient cannot find providers that resemble them, their beliefs, their culture, or other facets of their life, they run the risk of not being understood or being able to receive the appropriate treatment.”

Or as the University of Michigan Health Lab claimed: “Minority Patients Benefit From Having Minority Doctors.”

The National Library of Medicine lists dozens of articles claiming that healthcare outcomes are significantly impacted by discordant patients and medical providers. All of these claims are made in an effort to justify the need for more “people of color” in the medical field.

Yet, few ask how such a medical system would work. Would such a system mean that white patients would not be treated by Indian or Asian doctors? Should Blacks only be treated by Black doctors?

Currently, Asians comprise 17% of America’s doctors while only being 7% of the population – should they be limited to only treating 7% of all Americans?

Moreover, one has to ask how such a system could ever play out. According to one medical school, there are over 135 medical specialties and subspecialties. That includes everything from allergies to ophthalmic surgery to urology. Is it even possible that there can be the right ratio of doctors of all races and nationalities in every specialty?

There is no scientific basis for patients requesting that their doctor reflects their racial makeup. In fact, false claims that people differ biologically by race are exactly what has led to racism. Yet the American Medical Association continues to tout the political line that “diversity” in medicine leads to better health outcomes.

There is a constant flow of articles claiming that “racial discrimination permeates the healthcare systems” in the United States. But all accusations of racism are generalized. None of the articles ever discuss any specific doctors – nor any specific allegations.

If these associations learn that any doctors are indeed providing inferior care due to racism, those doctors should be disciplined. But no such charges have ever been made – despite the medical establishments’ ubiquitous charges of racism in the healthcare system.

If anything, the medical community has gone above and beyond to specifically protect black patients.

During the early days of the pandemic, many public health authorities gave black Americans priority access to vaccines – even before elderly white patients. The federal government and many local governments invested significant money marketing the vaccine to black patients specifically. Now, white Americans are more likely to die of covid than black Americans, according to Harvard’s School of Public Health.

Prior to the vaccine, black Americans were dying at higher rates due to increased levels of comorbidities – including diabetes and heart disease. At the time, the racial disparity in death rates was a top conversation sparking questions about racism in the medical profession. But even after the disparity reversed, the media continues to smear the American healthcare system as racist.

In the very article that described the white death rate surpassing the black death rate, the Washington Post wrote: “When it comes to racism, most people think of something that occurs between individuals. But it’s as much about who has access to power, wealth and rights as it is about insults, suspicion and disrespect. Prejudice and discrimination, even if unconscious, can be deadly — and not just for the intended targets.”

The Harvard professor interviewed for the report claimed that the American healthcare system needed to further address “the cumulative impact of injustice” in the same article, too.

Even when the medical community moves mountains to protect non-white patients, it is accused of harboring unconscious bias and constructing a system of injustice.

Rather than promoting scaremongers – that somehow white doctors are callous to the concerns of non-whites – the medical association and the media should be promoting a rational message based on science. After all, our bodies are essentially the same. The heart functions no differently in a black person than it does in a white person.

Constant claims that America’s healthcare system is racist will only lead to distrust. People may avoid treatment. Or people may equate vital medical advice like “stop smoking” or “improve your diet” to racism rather than science.

Yes, cultural differences can impact our health. Yes, some diseases tend to be more prominent in some races than others. However, white doctors are quite capable of understanding those variations. Just as Asian doctors are capable of treating a Jew who suffers from Tay-Sachs Disease more often than other nationalities.

Nothing is to be gained – and much is to be lost by racializing our healthcare system. Yet, in the name of supposed racial equity, our medical system seems to be moving toward a system based on race rather than science.