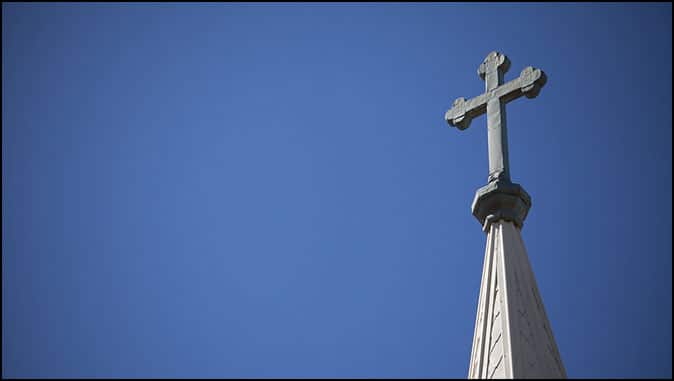 As reports began trickling in last week about which organizations received coronavirus relief funds, it became known that Planned Parenthood received at least $150 million in funds, and several businesses connected to Members of Congress also received funds. Despite this controversy over which organizations received relief funds, the media has singled out the church as being the most egregious recipient of them all.

The AP recently reported that the Roman Catholic Church lobbied the Trump administration to receive $1.4 billion in coronavirus relief funds and Reuters revealed that several evangelical churches with ties to the Trump administration also received funds. With targeted attacks on faith-based organizations, the media missed several marks about how the program operates and further demonstrates a basic misunderstanding of how religious institutions operate.

The Media Ignores the Details

The Paycheck Protection Program (PPP), first passed in the CARES Act, is designed to grant forgivable loans to small businesses and nonprofit organizations specifically to keep employees on their employers’ payroll during the coronavirus pandemic. These loans are administered by the Small Business Administration (SBA), and because of that it has led to confusion that nonprofits including churches are not eligible. However, the legislation explicitly allows nonprofit organizations to be eligible for the program. The text of the legislation was not initially clear on whether religious nonprofits were eligible or not, so at the request of several Members of Congress, the SBA issued an FAQ document clearly stating that faith-based entities can receive PPP funds.

The program is also very clear on how the funds must be used for forgiveness eligibility. The funds must be used on payroll, mortgage payments, rent, or utilities to qualify for forgiveness; otherwise the funding acts as a normal loan complete with interest and other obligations. This ensures that the funds are directly used to help employees from being furloughed, and that funds are not used on expressly religious activities. Furthermore, this program is open to all faith-based entities regardless of religious affiliation. It does not provide special treatment for Christian or Jewish organizations; even the stridently atheist advocacy group Freedom From Religion Foundation received a PPP loan. This fact alone should help alleviate concerns that the government is somehow violating the establishment clause of the Constitution by unfairly favoring specific churches and religious groups.

The Unique Structure of Churches

However, the main point of contention comes with the affiliation rule that Congress included in the CARES Act. This rule was included so that small businesses or nonprofits that have the same ownership, management, finances, or identity of a larger organization will have their total employees counted together to exclude small organizations that may already have the necessary financial help from a larger umbrella organization. This is the provision which gave the SBA the authority to exclude Planned Parenthood from receiving PPP loans, yet it was not enforced, which lead Planned Parenthood to be given $150 million in funds. It’s also the same provision which some have argued should exclude churches which are affiliates of a larger entity like the Catholic Church.

However, this concern reveals a basic misunderstanding of the structure of religious organizations and has unfortunately led to attacks on churches for supposedly violating this rule. For the most part, churches affiliated with larger entities like the Southern Baptist Convention or the Catholic Church operate independently. They raise their own money, take out their own loans, pay their own utility costs, and hire and manage their own staff. In many respects, these churches operate as independent organizations to best serve their local community, resembling the operations of a small business. For example, within the Southern Baptist Convention—the largest Protestant denomination in America—each church is considered autonomous. This is a basic tenet of Baptist ecclesiology; churches can give a percentage of their undesignated receipts to their state convention to support missions and ministries through the Cooperate Program if they choose to, but are not punished or removed from the convention if they do not.

These considerations show that the media’s narrative on churches and the PPP program is not accurate, especially when it comes to churches that are connected to larger affiliate organizations for specifically religious reasons like directing religious teachings or assigning pastors to minister to specific churches. The SBA recognized this in their guidance for faith-based organizations applying for coronavirus relief funds. In fact, the SBA FAQs clearly applies the First Amendment to the program, noting:

While it may seem like Planned Parenthood and large religious affiliate organizations like a Catholic diocese have a similar structure and both should be ineligible for PPP loans, only these faith-based institutions are eligible for the religious exemption that is consistent with constitutional and statutory religious freedom protections.

Religion as an Important Public Good

Churches have employees they must continue to pay during the pandemic just like any other for-profit business. In addition to taking care of their workers, churches must also pay interest on mortgages or rent for the space they use as well as utilities to keep the lights on. These requirements have been met by the churches that have lawfully been granted a PPP loan.

Moreover, it is important to realize that churches also play an essential role in ministering to people’s needs. With the shutdown of churches due to COVID-19, many of these mercy ministers have been affected. Outside of the government, the Catholic Church supplies a huge portion of the social services in America, serving millions of people who are suffering now more than ever. In response to the targeted reporting on churches receiving PPP loans, Archbishop Paul S. Coakley, chairman of the U.S. Conference of Catholic Bishops’ (USCCB) Committee on Domestic Justice and Human Development, called the loans an “essential lifeline” for employees and their families. The PPP loans play an important part in the ability of churches to continue their support of their brothers and sisters in Christ, especially during this time of financial instability.

While it is understandable to raise concerns about certain organizations improperly applying for a PPP loan, media hit pieces like the AP article are nothing more than attacks on people of faith and religious organizations. Tragically, lies and falsehoods have a price; in the last few days as the mainstream media has singled out faith-based organizations in their reporting, religious statues have been vandalized and churches have been burned.

Not only are attacks on churches lawfully applying for aid appalling, the comparative lack of media attention to the fact that Planned Parenthood improperly applied for the PPP loan is astounding. Planned Parenthood is not even remotely close to a small employer since its number of employees dwarf the 500-employee limit for eligibility for the PPP loan, yet they applied for and received millions of dollars in aid while also continuing to lobby for further financial assistance in future coronavirus relief legislation.

This whole situation makes it clear that the media and ruling elites of our country find churches and religious organizations, which often labor quietly for the common good for all of society, more abhorrent than abortion facilities designed specifically to end the lives of innocent human beings. Now is the time for the church and people of faith to stand for what is good and right and push back against a worldview which values the destruction of human life over the salvation of souls.

Connor Semelsberger is the Legislative Assistant at Family Research Council.

Samantha Stahl is a Communications intern at Family Research Council.