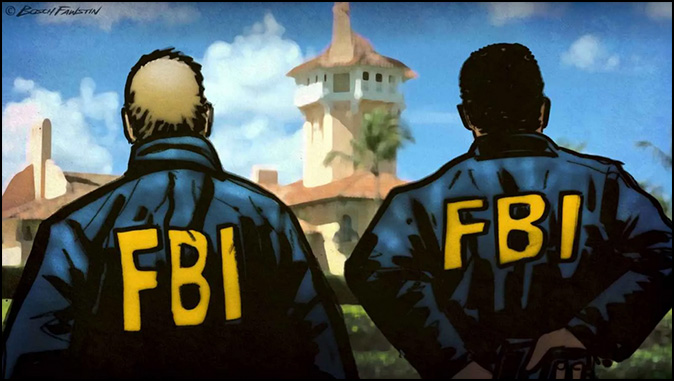 The Mar-a-Lago Raid is a Preview of a Rigged 2024 Election
The Democrats will prosecute their way to victory.
By Daniel Greenfield

On Thursday, FBI Director Christopher Wray cut short his testimony before the Senate Judiciary Committee to fly the FBI’s private jet to his family’s vacation home. At the hearing, Wray had admitted that disciplinary action against FBI personnel involved in Russiagate abuses had been “slowed down” and refused to call Russiagate a “hoax”.

On Monday, President Trump revealed that Mar-a-Lago had been raided by “a large group of FBI agents”. Any warrant for such a raid would have been signed off on by Attorney General Merrick Garland and his associates in the Biden administration which expects to face the former president in the next election. Wray, who quietly listened to complaints about the politicization of the FBI from Senator Grassley and Cruz, among others, would have known what was coming.

The New York Times reported that, “according to two people familiar with the investigation, appeared to be focused on material that Mr. Trump had brought with him to Mar-a-Lago, his private club and residence, after he left the White House.”

Back in May, the paper revealed that a federal grand jury investigation had been convened over boxes of “government documents, mementos, gifts and letters” taken to Mar-a-Lago. There was no federal investigation when the Clintons left the White House with $190,000 worth of “china, flatware, rugs, televisions, sofas and other gifts”. The FBI didn’t come knocking at Chappaqua.

This isn’t about the documents. Just as Russiagate was not about the Russians. It’s not about the 15 boxes of documents, letters and assorted presidential records and gifts that were hurriedly packed up and sent off to Mar-a-Lago, most of which were later returned when the National Archives requested them, this is about the 2024 presidential election.

While the FBI handed out immunity agreements to Hillary Clinton staffers who mishandled classified documents and erased their devices, expect any Trump staffers to be hit with the highest possible charges and penalties, and for any information seized from them to be used to develop cases against Trump and other administration figures. That’s what this is really about.

The Mar-a-Lago raid is a more aggressive version of the same Russiagate tactics which were aimed at busting and flipping Trump associates, while gathering any materials that can be spun off into related or entirely unrelated investigations. The FBI raid will not result in charges against Trump, but will probably be used to hit staffers and aides with security violations. This has the dual purpose of keeping them from serving in any future administration and putting them through the wringer, running up massive legal bills and getting them to testify against Trump.

And it’s only happening because the Democrats expect to run against Trump in 2024.

There’s no coincidence that Trump investigations have once again ramped up, after quieting down, as the former president began sending signals that he intends to run again. If Trump had announced that he was formally retiring, there would be no FBI agents at Mar-a-Lago. Instead they would be headed to the homes of any of the potential conservative frontrunners who would suddenly be facing subpoenas, entrapment and wiretapping run out of D.C.

Biden’s abysmal polling makes it impossible for him to win by any means short of this. And the Democrats have no popular candidates waiting in the wings. Anyone else they run, from Kamala to Buttigieg to Bernie to Newsom to Hillary stands no chance of winning over the public.

All that’s left is this.

The Obama administration used the Justice Department to rig the 2016 election. The Biden administration began the same process early on. It has weaponized the DOJ in previously unprecedented ways to shape the voting map, to rally its base and investigate its enemies.

It will get worse as the apparatchiks of a lame duck administration truly get desperate.

As President Trump pointed out, “Hillary Clinton was allowed to delete and acid wash 33,000 E-mail AFTER they were subpoenaed by Congress. Absolutely nothing happened to hold her accountable.”

The FBI handed out immunity agreements to top Hillary aides in exchange for access to their devices and then went on to destroy laptops even though Congress wanted access to them.

Over 2,000 emails on Hillary’s server were found to be classified. 37 pages were deemed top secret. Senator Grassley listed 588 security violations. Hillary’s unconvincing defense of mishandling classified information was that she didn’t know what a “C” stood for.

From the removal of boxes of documents from Vince Foster’s office after his suicide to Bill’s National Security Advisor Sandy Berger stuffing classified documents from the National Archives into his pants and socks, the Clintons have made document theft their specialty.

And it’s all too typical for Trump to be accused of the crimes that the Clintons committed.

But the alleged crimes in a political investigation don’t matter. What does matter is the strong signal from the Biden administration that what the Obama administration did quietly, it will do loudly, aggressively targeting a prospective political opponent with a series of politically motivated investigations using the full force and authority of the Justice Department.

That is a constitutional crisis.

The allegations and investigations will continue to shift as they have since Day 1. Whether it’s the Russians, the Ukranians, Jan 6, and now classified document handling procedures, and whatever they come up with tomorrow, Biden’s DOJ intends to win by indicting his opponents.

The Democrats have given up winning the 2024 presidential campaign at the polls and intend to win it at the hands of their prosecutors and judges.

Instead of winning over the public, they want to prosecute their way to victory.