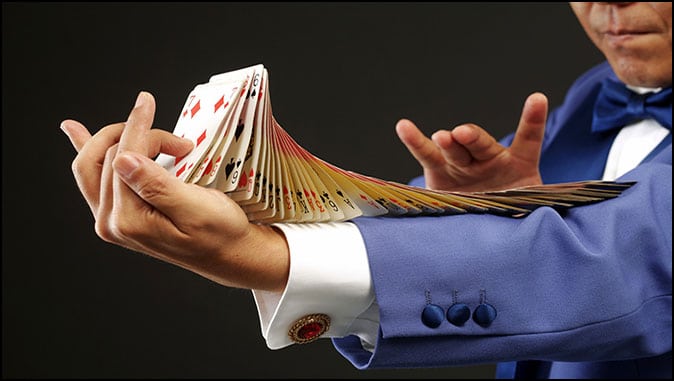 The Magic of the Democratic Party
Constant distraction is the core of dystopian politics.
By Garrison Bergeron

The most famous technique magicians use to fool you is distraction. They distract you with one hand while doing their trick with the other. The amazing thing is how it keeps working even though we all know about it. The next magic act comes around, and we still look at the hand that the magician wants us to watch while ignoring the hand weaving the deceit.

Nobody understands this better than the Democrat Party. Democrat mayors preside over the most horrific dysfunction and violence in America. Recently President Trump called them out, claiming that the top 20 most violent cities in the USA were run by Democrats. The Democrats were livid. One of their favorite propaganda outlets, the Washington Post, “fact-checked” Trump and declared him wrong, saying: “Trump keeps claiming that the most dangerous cities in America are all run by Democrats. They aren’t.” But the article went on to document (with supporting data) that 17 of the top 20 are indeed actually the most dangerous.

Since many of us cannot witness what’s actually going on in Democrat-run cities, their mayors can distract us with irrelevant issues while hiding the carnage wrought by their own policies. Search for “Chicago gangs,” for example, and you’ll see a huge number of sites dedicated to the subject. High on your list will be a page called “chicagoganghistory.com.” This site alone is breathtaking in its depth; try navigating its menus.

I always felt that the bullies who tormented me in my suburban public schools were nasty, but now I realize that they were, on some levels, powerless. The bullies didn’t follow me home. They weren’t organized into gangs. They didn’t threaten my life. They couldn’t force me to join them. They couldn’t do these things because my suburban neighborhoods were rational, functioning places with mostly intact families and effective police departments.

In gang-ridden Chicago it’s different. The bullies follow you home and they murder you and your family if they feel like it. Depending on his neighborhood, a black male in Chicago may have only the choice of carrying a gun for one gang or another; “not joining a gang” may not be an option. A black female in Chicago may similarly have few options other than to run with males from one gang or another. If she has children it is unlikely that they will have a father in their lives, since most black children are now raised in fatherless households. According to various sources, the percentage of black fatherless households has either doubled or tripled from the 25% rate that existed before the Democrats began their social engineering 50 years ago. If a black female has kids, she will almost certainly send them to the Democrat-run public schools where they will be trained to expect to live under the same regime.

The social rot that pervades Chicago is one of those hands that the Democrat Party doesn’t want you watching. Over the July 4 weekend of 2020, for example, during the Black Lives Matter insurrection sweeping the country, Chicago had 87 shootings resulting in 17 deaths. Chicago mayor Lori Lightfoot handed the media the same old distraction: guns are the problem. As always, the media ran with it. She uses this excuse, this distraction, because she knows it works. The fact that millions of Americans elsewhere own guns and don’t generally shoot each other never gains any traction in the establishment media.

The local “news” does occasionally lament the ongoing carnage in Democrat-run cities, but it rarely discusses the source of the problem, since the actual problem is what Democrats don’t want you watching. To keep you looking away, they fill the media with distractions.

Black Lives Matter is a prime example. The great deception of BLM is to pretend that black people are constantly murdered by brutal police and ruined by the “systemic racism” that pervades white society. The data regarding deaths of people in police custody refute this, and thousands of blacks are killed annually by rampant gang violence in the Democrats’ cities, but BLM is the hand that Democrats want you to see. As with the magician’s trick, it’s a lie, it’s ridiculous, and it’s painfully obvious. But we keep looking at it, and the Democratic machine that controls our culture, including your company’s HR department, ensures that you won’t say a word to the contrary.

Democrats have a pleasant-sounding mantra that allows their subordinate gangs to operate with impunity: property has no value compared to human life. This is their justification for ordering their police departments to stand down, granting their arsonists, looters, vandals, and killers unlimited power over all of us. Democrats use their control of our culture to ensure that nobody says otherwise; recently the top editor of the Philadelphia Inquirer, which published the obvious truth in an article entitled “Buildings Matter Too,” was forced to step down.

But we all know that without property there is no life. If we take away your house and your food and leave you at the mercy of the gangs who took them away, you will die. The folks who buy the “only human lives matter” platitude don’t seem to understand that the destruction of personal property and the elimination of personal safety are the roots of gang control. That’s why the nation’s most powerful and psychotic gang wants you to vote to defund the police. Without police there is no personal property and there is no personal safety, and that is exactly what the Democrats have planned for you no matter where you live.

It seems obvious that Democrats want huge swaths of their cities destroyed. The same tale has been playing out since the 1960s: some incident sparks riots, the police are told to stand down, the media reports that the riots are a just cause, the people who can least afford the damage are ruined, and the charred remains are left as a testimony to the Democrats’ diabolical insanity. This pattern is nothing less than a terror campaign. Elect us, pay us, or we’ll burn you down. And just for yucks, every few years we’ll burn you down anyway. Terror is how a gang controls you, and you are the target of the nation’s most powerful terrorist group.

Occasionally the Democrats do slip up. Recently the mayor of Atlanta expressed dismay at Black Lives Matter after one of its “protesters” shot an eight-year-old girl dead. Strangely, the mayor truthfully said, “You can’t blame this on police officers. It’s about people who shot a baby in a car. We’re doing each other more harm than any officer on this force.” This was not what Democrats wanted you reading, so they pulled out their favorite trick; shortly after this statement, the mayor announced that she had tested positive for coronavirus and that she was not symptomatic. This great piece of non-news is now almost the only thing I see when searching on “Atlanta mayor.” Isn’t it amazing, in the age of HIPAA, how the personal diagnoses of public figures now somehow make headlines?

I have neighbors with “Black Lives Matter” signs on their lawns. BLM destroys some of the poorest parts of our cities, doing the most damage to businesses owned by non-whites. BLM then disparages police, allowing despotic mayors to remove the few protections that their cities’ residents already have. But white suburbanites, secure in their enclaves that probably won’t be burned down any time soon, can see only the hand that the Democrats want seen. Their mental enslavement is complete; no matter how much destruction and murder is wrought by BLM, the white suburban Democrat sees only the deception. As with the hapless mayors of Seattle and Olympia, who referred to BLM as terrorists only after BLM attacked them at their own houses, my neighbors will presumably see the light only when the BLM arsonists, looters, vandals, and killers arrive at their doors.

So keep chanting the mindless phrase “Black Lives Matter”, won’t you? Its very name is a pleasant-sounding platitude. Its stated objectives are also comforting, so long as you don’t read too far down into them. Black Lives Matter is the hand that the Democratic Party wants you to see. It’s the deception. It’s the lie. It’s the source of the Democrats’ terroristic power over your life.

And if you’re dumb enough to keep looking where they want you looking, you’ll vote them back into office.

Garrison Bergeron is a serial entrepreneur who spent most of his career in Illinois, where he founded and operated three companies, two in IT and one in education. Today in retirement he is a relentless political and education activist.

Cartoon Network Is All In with the LGBTQ Agenda

Minneapolis Reimagines Public Safety by Turning Parks Over to Criminals

If This Can Happen in a Wheaton, Illinois Elementary School

If This Can Happen in a Wheaton, Illinois Elementary School By Laurie Higgins FROGS! GET…

Maxine Waters: The Lover of Marxism Who Hates President Trump

Maxine Waters: The Lover of Marxism Who Hates President Trump A vile hater with mountains…

Trump Should Ignore Judge on Transgenders