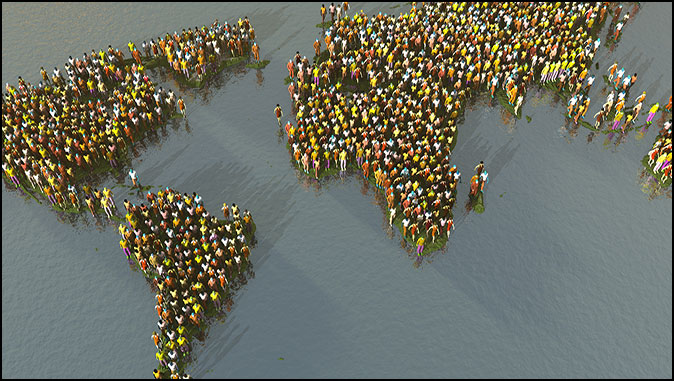 Last week, the left’s war on procreation was headline news.

In the April 29th British edition of Vogue, Nell Frizzell wrote a pean to population control: “Is Having a Child Pure Environmental Terrorism?” – a shameless piece of virtue signaling.

Frizzell confessed that when she was pregnant, she “worried feverishly about the strain on the Earth’s resources that another Western child would add.”

The author went on to agonize about the amount of electricity her child would use in his lifetime, the food he would consume and what it would take to grow it – and how the future consumer would add to air pollution, global warming and depleted resources.

It was painful to read and depressing to contemplate – that someone so indoctrinated in the cult of Carbon Footprints can display their ignorance in the mass media.

Then there was the news that Microsoft founder Bill Gates and his wife Melinda, America’s Woke power couple, are getting a divorce. Unfortunately, the work of The Bill and Melinda Gates Foundation will continue. With $43.3 billion in assets (larger than the economies of most countries) the Foundation is dedicated to making the world a more barren place.

Its target isn’t Western children but kids in Africa, which, in a way, makes sense. Africa is the only continent with above-replacement fertility. In conjunction with the United Nations Population Fund, the Gates Foundation sponsored a series of international conferences pushing population control, including abortion.

At one in Addis Ababa in 2013, there was, according to UNFPA, “a focus on universal access to reproductive health (code for abortion and government-sponsored contraception), especially for young people and other vulnerable groups.”

Bill’s interest in young people was reflected in his friendship with the late Jeffrey Epstein, already convicted of soliciting sex from minors when the two first met in 2011.

Along with the UN and International Planned Parenthood, the Gates Foundation is dedicated to eliminating safeguards for unborn children. Melinda believes that until women “have the power not to have children,” life will not improve in emerging nations.

If the billions that Bill and Melinda and their Good Club friends like Ted Turner and George Soros pump into population control were spent on clean water, better nutrition and maternal health care, the condition of Africans would be immeasurably improved. But then they’d be buying life, when what they want is death.

Strip away the humanitarian bombast and we’re left with a brutal reality: The billionaire lefties of the world want fewer Africans. That Africans are still having large families, with polar ice caps supposedly melting and super-storms brewing, offends their sensibilities. Prince Harry is anxious about African population growth infringing on animal habitats. Cheetahs si; children no?

On another front, it looks like the U.S. Conference of Catholic Bishops is finally going to do something about the most pro-abortion president in our history (who White House mouthpiece Jen Psaki shamelessly refers to as “a devout Catholic”) at their June meeting.

In his first day in office, Biden repealed the Mexico City Policy (blocking U.S. aid to foreign NGOs promoting or performing abortions). Now, the Hyde Amendment (prohibiting federal funding of abortion domestically) is in his sights. Calling Joe a “devout Catholic” is like calling a Jew who eats bacon cheeseburgers on Yom Kippur “observant.”

The Gateses, the Vogue writer and Biden’s handlers are all neo-Malthusians — disciples of Paul Ehrlich, the much-discredited prophet of over-population.

After visiting Calcutta in the 1960s, and based on his extensive study of insect life, Ehrlich wrote “The Population Bomb” in 1968, which forecast worldwide famine in the 1970s. If you missed it, you aren’t alone. The Bomb blew up in Ehrlich’s face, like an exploding cigar.

As economist Julian Simon demonstrated in “The Ultimate Resource,” population growth leads to more resources, not less. Rising prices spur exploration and the discovery of new processes to use resources more efficiently.

If population growth leaves a nation stuck in poverty, why are China and India (with the world largest populations) booming? Why did the Industrial Revolution first occur in Britain, which experienced unprecedented population growth in the 18th and early 19th centuries, instead of Greenland?

While environmental activists view more people as more mouths to feed, others see them as more hands to produce and more brains to innovate.

Despite this reality, the Malthusians are having an undeniable impact. Worldwide fertility rates (the number of children the average woman will have in her lifetime) are falling fast. Sometime in this century, we will get into population decline, perhaps even population freefall.

Replacement fertility is approximately 2.1. Globally, fertility has fallen precipitously, from 4.7 in 1950 to 2.4 today. In the European Union, the average fertility rate is 1.55. In the United State, it dropped from 3.55 during the baby boom years to around 1.9.

That’s why the population-controllers are targeting Africa, the last stronghold of robust fertility.

Overpopulation is a myth. Population decline could soon be a reality. Then it will be a question of who’s left to generate the power, grow the crops and take care of the thousand and one tasks essential to keep society functioning.

We’ll need Fizzell’s child, and his descendants, to help keep the lights on.