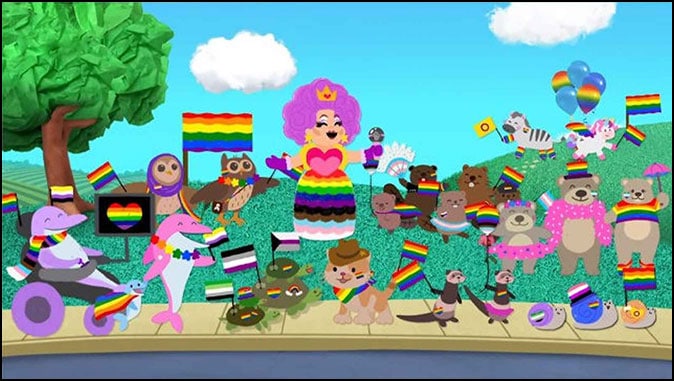 The Left’s Urgent Mission to Sexualize Children
As Pride Month begins, the Left’s predatory designs on our kids accelerate.
By Mark Tapson

Mark Tapson is the Shillman Fellow on Popular Culture for the David Horowitz Freedom Center.

During a speech at Joint Base Langley-Eustice in Hampton, Virginia last Friday, listless President Joe Biden drifted into a strange reverie addressed to a female child in the audience, daughter of guest Brittany Bean, the wife of a soldier currently deployed in Afghanistan.

“I love those barrettes in your hair, man. I tell you what, look at her. She looks like she’s 19 years old sitting there like a little lady with her legs crossed,” Biden mused breathlessly. The little girl looked to be no older than perhaps seven years old.

This deeply disturbing behavior is not atypical of the 78-year-old Biden, who has a long, well-documented history of cringe-worthy touching and sniffing of girls and women in public. It is so typical, in fact, that this leering in the middle of his speech didn’t even raise an eyebrow among his fellow Democrats, particularly in the activist news media, who did not report on it. Imagine the apoplectic outrage if Biden’s comments had been made instead by former President Donald Trump, whom the media routinely demonized as a sexual predator for a boastful comment he made about grown women, not little girls, in a private conversation ten years before he was president.

But then, why should the left find Biden’s apparent sexualization of a child inappropriate? After all, sexualizing little children ranks very high on their anti-family agenda.

Right on the heels of the one day a year devoted to American patriots who gave their lives in military service to this country, comes an entire month designated for the compulsory celebration of a small segment of society simply for their sexual identity, which bullying activists have weaponized for vastly disproportionate political and cultural power.

For the cultural Marxists in the Biden administration, “Pride Month” is a time for raising the LGBT rainbow flag at embassies around the world to virtue-signal America’s commitment to divisive identity politics and to Karl Marx’s dream of abolishing the nuclear family.

For woke corporations, who festoon their logos with rainbows in June, Pride Month is a cynical marketing ploy – except where they operate in countries that put homosexuals to death; in those instances, “pride” takes a back seat to a more lucrative cultural sensitivity.

In Illinois, legislators passed a bill last Friday requiring K-12 public schools that offer sex education to align their curriculum with the National Sex Education Standards (NSES). These standards state that between grades K-2 children should learn to “define gender, gender identity, and gender role stereotypes.” Between grades 3-5, children should learn to “distinguish between sex assigned at birth and gender identity,” “define and explain differences between cisgender, transgender, gender nonbinary, gender expansive, and gender identity,” and “explain that gender expression and gender identity exist along a spectrum.” The standards also require that children be taught about “power and privilege, conscious and unconscious bias, intersectionality, and covert and overt discrimination, and the principles of reproductive justice, racial justice, social justice, and equity.”

What do racial and social justice have to do with sex education? Nothing unless, like the Marxist left, you believe that every facet of life is reducible to the political, that every human interaction is about power, and that the inculcation of social justice activism, not the cultivation of critical thinking, should be the real purpose of education – even sex education.

For men who enjoy dressing up like demonic clown parodies of women, June is a busy time normalizing perversion for unsuspecting children and their woke white moms at Drag Queen Story Hour in public libraries. They’re also hard at work in tandem with the entertainment industry promoting trans ideology and sexually grooming children.

PBS recently aired a children’s show called Let’s Learn featuring someone going by the alias “Little Miss Hot Mess,” singing, dancing, and reading his book about drag queens to an intended audience of three to eight-year-olds. It was produced by the public media company The WNET Group in partnership with the New York City Department of Education. “I wrote this book because I wanted everyone to get to experience the magic of drag and to get a little practice shaking their hips or shimmying their shoulders to know how we can feel fabulous inside of our own bodies,” said Little Miss Hot Mess, who is one of the founding members of Drag Queen Story Hour.

In a healthy culture grounded in sanity, spirituality, and traditional morality, in which the innocence and development of children is protected and prioritized, an adult male in wig, garish makeup, and women’s dress calling himself “Little Miss Hot Mess” and grooming pre-pubescent kids to revel in their “fabulous” sexuality would be arrested, if not tarred and feathered, as a dangerous pedophile. In our current, tragically decadent culture, however, he gets a TV show and a book deal, and critics who address him by the wrong pronouns are labeled bigots.

Breitbart News recently listed over a dozen more programs and characters currently inundating children with sexualizing indoctrination. One such propaganda outlet is Blue’s Clues, a purportedly educational show aimed at pre-schoolers and featuring animal characters. Their most recent episode stars drag queen “Nina West” in an animated, three-and-a-half-minute music video praising families composed of a wide variety of parents celebrating aberrations such as pansexuality, polyamory, and transgenderism. “All families are made differently, they love each other so proudly,” West sings, adding, “Love is love is love you see, and everyone should love proudly.”

Except heterosexuals, apparently, who are not mentioned in the video. There’s no place for them in our brave new inclusive world; after all, “heteronormativity” and monogamy are unwoke and oppressive. But if love is love, and everyone should love proudly, does that include pedophiles? Of course it does. The movement for pedophilia acceptance is already well underway. What about incest? Bestiality? If all love is equally valid, where is the line drawn? Why is there a line at all, if sexuality is divorced from procreation, every sexual unorthodoxy is celebrated, and parents are redefined as any conceivable combination of sexually consenting adults?

This is an astounding degree of child abuse. The left loves to demonize conservative homeschooling parents as child abusers brainwashing their kids with an unapproved worldview that includes dangerous ideas like patriotism, but the real thieves of childhood innocence are the cultural Marxists who indoctrinate young victims that are not equipped to process these warped, extremist fantasies.

What is this all about? Why the full-court press to indoctrinate children with woke sexuality, to force heterosexual parents to the back of the bus, and to normalize every sexual perversion this side of Sodom and Gomorrah?

Despite the ubiquity of the innocuous-sounding buzzwords “inclusiveness,” “diversity,” and “pride,” it’s not about any of those. The goal of this urgent mission is to implant in vulnerable, impressionable children a gender-confused sexual consciousness decoupled from the norms of the “oppressor” class. It is to drive a wedge between children and their biological parents and to undermine the stable, traditional family unit, which is the most resistant structural obstacle to the fashioning of their utopian collective. It is to extinguish an already-marginalized Christian faith and morality in upcoming generations, and to establish the secular, globalist state as their benevolent parental authority.

The end result for our children will not be “pride” and liberation from the bourgeois structures Karl Marx called “slavery”; instead, they will be slaves to an empty, inauthentic sexuality, and alienated orphans in a collectivist society.

Shh, Nick, Don't Woke the Baby By Tony Perkins What is the fastest way to…

Admit it, Biden: Trump was Right on Cuba

Admit it, Biden: Trump was Right on Cuba Reflections on Obama's embrace of the Castro…

20 Questions The Left Should Be Asked – But Will Never Answer

The G7 and the Globalist Diplomacy Fetish

Petition to Remove Secretary of Defense Lloyd Austin By Frontpagemag.com Editors' note: The hour is…