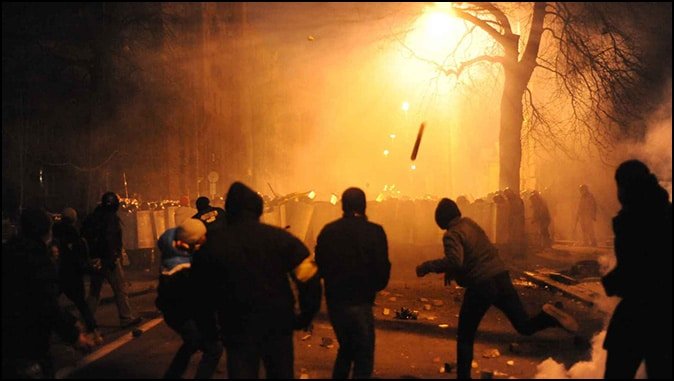 The Left’s Defense of Arson and Looting as Weapons Against ‘Institutionalized Racism’
Once again, progressives maliciously elevate nationwide violence and anarchy.
By Joseph Klein

Massachusetts Democratic Attorney General Maura Healey hailed the acts of arson occurring across the country as some sort of symbol of regeneration. In a speech she delivered to the Boston Chamber of Commerce on June 2nd, Healy said, “Yes, America is burning, but that’s how forests grow.” She later tweeted that “we must seize the opportunity we have right now to build anew in ways that rid us of the institutionalized racism that’s led to America burning today.”

Healey’s first duty as attorney general is to uphold the laws of her state and prosecute criminal violations. Arson is a serious crime. Arsonists must be arrested and prosecuted, whether they are agitators of the left or right. There is no legal defense that excuses arson because the arsonists believe they are fighting “institutionalized racism.” What’s next – that looting is a legitimate form of wealth redistribution to combat what some social justice advocates have called “racial capitalism”? It’s time to send Healey packing for inciting violence and dereliction of duty.

“By choosing to highlight this insane analogy, it should be clear to Massachusetts residents that no matter what else Democrats like Attorney General Healey say, they will always condone mob tactics. The Radical Democrats, led by the likes of Attorney General Healey, sat back and watched as cities went up in flames over the weekend, and are now openly admitting that this is all part of their plan to fundamentally change America by any means possible. This is no way to honor the memory of George Floyd, or correct the problems that led to his unjustified killing.”

Some in the media also make excuses for the rioting. CNN’s Chris Cuomo, for example, questioned the notion that the protests need to be peaceful. He should read the text of the First Amendment, which protects “the right of the people peaceably to assemble, and to petition the Government for a redress of grievances.” (Emphasis added)

New York Times writer Nikole Hannah-Jones, who undeservedly won a Pulitzer Prize for her contribution to the historically inaccurate New York Times ‘1619 Project,’ went further. She said not to worry about the destruction of property by rioters. “Destroying property which can be replaced is not violence,” Hannah-Jones told CBS News Tuesday. “I think any reasonable person would say we shouldn’t be destroying other people’s property. But these are not reasonable times.” In an interview with CNN, Hannah-Jones referred to looting as justifiable “symbolic taking” because black communities “have been looted for decades.” She said, “I think I would not describe looting as violence.”

Apparently, it never occurred to Hannah-Jones that both black and white looters have been exploiting the George Floyd tragedy and peaceful protests to enrich themselves with stolen property. There is nothing “symbolic” about such selfish criminal acts.

What does Hannah-Jones say to the black business owners who have seen their shops go up in flames or looted? For example, Kris Shelby, who is black, owned a store in Atlanta. “A lot of people don’t know the blood, sweat and tears that go into being a business owner and the type of sacrifices we had to go through to be where we’re at right now,” he said. Shelby sympathizes with the peaceful protesters demonstrating over George Floyd’s horrendous death at the hands of a rogue policeman. “But as a black man, and this is a black-owned business, it’s just sad,” he said about the looting. “It really leaves a bad taste in our mouths, to be honest.”

The dreams and livelihoods of individual black and other minority small business owners have been destroyed all over the country. But Hannah-Jones is indifferent to their plight. For her, there are no black individuals with their own individual aspirations. She believes that “black people are a collective.” Following this absurd premise to its “logical” conclusion, an individual black who may have lost his or her life savings from wanton looting and arson should be willing to take one for the team.

Hannah-Jones said that “collective grieving for the desecration of black life is a regular, daily experience for black people in this country,” Does her “collective grieving” extend to the black retired St. Louis police captain, David Dorn, who was shot and killed while attempting to protect a neighborhood store from looters? All that Hannah-Jones did in noting Dorn’s murder was to retweet, without comment, a CNN report. She would have shown more respect for Dorn if she at least had retweeted this statement by the Ethical Society of Police, a black police union in St. Louis, which it wrote on Facebook: “Looters murdered him at a pawnshop last night. He was the type of brother that would’ve given his life to save them if he had to. Violence like this is not the answer, whether it’s a citizen or officer.”

Hannah-Jones is provided a regular platform at the New York Times for her viewpoint, most notably the 1619 Project, which posits that American history and exceptionalism can only be understood through the lens of slavery. Yet she and other New York Times writers were aghast at the newspaper’s publication of an op-ed column by Republican Senator Tom Cotton that excoriated the criminals “simply out for loot and the thrill of destruction.” Senator Cotton suggested that if necessary federal troops should be used to stop them. Hannah-Jones tweeted, ”As a black woman, as a journalist, as an American, I am deeply ashamed that we ran this.”

After first defending its decision to publish the op-ed article in order to provide its readers with a different point of view, the New York Times surrendered to the leftwing mob mentality within its own staff. It apologized for its “rushed editorial process” and running the op-ed article that “did not meet our standards.” Those standards are now dictated by the “woke” ideology under which whites must atone for the sins of past generations going back to the first white slaveholder. They must purge their white privilege by submitting to the dismantling of a society built completely on institutionalized racism, according to this ideology. Progressive Massachusetts Attorney General Maura Healey has chosen to embrace this ideology in lieu of her fealty to the rule of law. She has plenty of company in academia, the media, and Hollywood.

Blacks who don’t bow down to the “woke” rulers are pilloried. Republican Senator Tim Scott of South Carolina has spoken out strongly against racial profiling from his own personal experience. But he chooses to be an individual with his own opinions rather than a cog in the black “collective.” As a result, he has been called Uncle Tom and far worse by the “woke” left.

On June 3rd, Senator Scott tweeted, “My heart is broken over the events of the last week, from the needless murder of #GeorgeFloyd, to the tragic death of retired St. Louis police captain #DavidDorn. When it comes to race and justice in this nation, solutions are needed now.” The senator tweeted on May 31st, “For those who believe that violence is a way to react, this is selfishness, and we do not tolerate this. Protest, be heard, be seen, and be peaceful. Stand for justice for #GeorgeFloyd, but please do it in order. How we conduct ourselves creates a path for the future.”

Senator Scott stands with the large mainstream of Americans of all races who are capable of distinguishing between peaceful protests decrying the brutal murder of George Floyd and acts of looting and destruction that serve no purpose but self-gratification. The “woke” progressives live in their own perpetual nightmare of an inherently evil, racist United States that is leading them to inflict destruction on our nation’s ordered liberty and the institutions that preserve it.