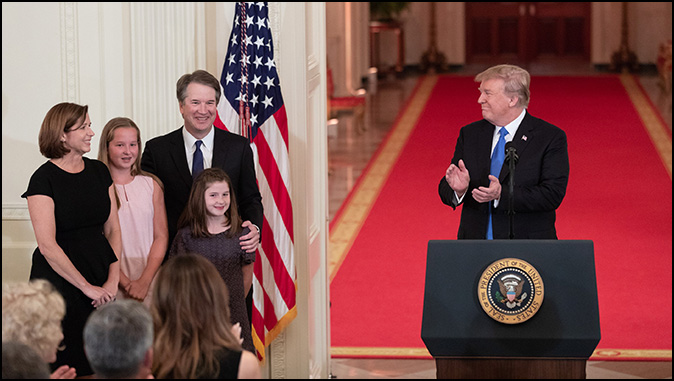 The Kavanaugh Assassination Plot is a Leftist Inside Job
Conservative justices are in hiding because AG Garland won’t enforce the law.
By Daniel Greenfield

After police arrested a California leftist on a mission to assassinate Justice Kavanaugh, the Biden administration finally condemned the campaign to intimidate the Supreme Court.

“As the president has consistently made clear, public officials, including judges, must be able to do their jobs without concern for their personal safety or that of their families,” White House press secretary Karine Jean-Pierre falsely claimed.

After leftist activists had posted a map of the homes of Supreme Court justices to harass them, Jen Psaki had retorted. “I don’t have an official U.S. government position on where people protest.”

There is in fact such a position and it’s illegal under 18 U.S.C. § 1507 which states that anyone with “the intent of interfering with, obstructing, or impeding the administration of justice, or with the intent of influencing any judge, juror, witness” “pickets or parades in or near a building….or residence, shall be fined under this title or imprisoned not more than one year, or both.”

Biden just decided not to enforce these laws in order to allow his leftist allies to intimidate the justices.

Not one of the leftists who have spent years harassing Supreme Court justices with protests outside the court and even their homes has been sent off to prison. Nor will they. Pounding on the doors of the Supreme Court, marching around the homes of justices, and trying to prevent them from coming to court have become basic parts of the activist playbook.

Even after the Kavanaugh assassination plot, leftists are continuing to protest outside his home.

The arrest of Nicholas Roske, armed with a Glock 17, and carrying burglar tools, pepper spray, and zip ties, is just the latest in a wave of leftist violence touched off by the hate campaign against Justice Kavanaugh and other conservative justices. Roske was angry about the Roe v. Wade leaked draft and said that he planned to break into Kavanaugh’s house and kill him.

Roske found Kavanaugh’s address on the internet after leftist activist groups doxxed him and other justices while encouraging protesters to intimidate them and their families in their homes.

What consequences will Roske face?

Last year, Ronald DeRisi, a New York man, was sentenced to only 18 months in prison after threatening to kill senators who voted to confirm Kavanaugh, including leaving one message, warning, “nine millimeter. Side of your f—ing scull, you scumbag motherf—-r.”

Justice Kavanaugh and his family have been relentlessly harassed since the nomination, the smear campaign and during his time on the Supreme Court. Those threats escalated with the leaked draft decision and were whipped up into a frenzy by the media with Big Tech complicity.

After the draft decision was leaked, fresh death threats poured in for the conservative justices. Twitter threats that still remain up include “ok I will kill samuel alito” and “we either gotta expand the scotus to 15 judges or kill clarence thomas.” While Twitter censors conservatives, these death threats are still up.

But it wasn’t just random social media nutjobs. Violent rhetoric had been embraced by the Democrat leadership trying to appease and incite their increasingly deranged leftist base.

“These justices are in danger that this opinion leaked before it was released publicly. There are people making threats against justices online and elsewhere. The attorney general needs to step up,” a former law clerk for Justice Gorsuch warned. “This is obstruction of justice for people to show up at a federal judge’s home to try to influence the outcome of a pending case.”

Protesters harassing a traffic court judge would face charges, but the leftists who have forced Supreme Court justices to hide out at undisclosed locations know the DOJ won’t touch them.

A DHS memo noted that, “threats discussed burning down or storming the U.S. Supreme Court and murdering Justices and their clerks.” Nevertheless, its spokesperson insisted that it, “is committed to protecting Americans’ freedom of speech and other civil rights and civil liberties, including the right to peacefully protest.” Much like the Black Lives Matter riots, leftists harassing justices is a mostly peaceful enterprise except when one of them brings along some zip ties.

The refusal to enforce the laws and stop the leftist harassment is the definition of an inside job.

Demand Justice, backed by the Soros Sixteen Thirty Fund’s dark money machine and headed by a former Schumer aide, launched a campaign to force Justice Breyer to resign using a billboard truck driving around the Supreme Court with the message, “Breyer, retire. It’s time for a Black woman Supreme Court justice. There’s no time to waste.”

After Breyer agreed to step down to make way for a racial quota leftist, Demand Justice told supporters that their “gushing fire hydrant of bullying tweets” helped force a justice off the court.

The leftist hate group knew that it had nothing to worry about from Attorney General Garland.

When a conspirator leaked the Roe v. Wade abortion draft decision, leftists protested outside the homes of justices and organized a plot to shut down the Supreme Court.

“One of our goals would be to expand the current political crisis by shutting down the Supreme Court,” a ShutdownDC organizer boasted. They delivered a public presentation showing off a “detailed tactical plan for blocking access to the Court’s underground parking garage, which is the primary entry and exit point for employees and justices.”

Instead of enforcing the law, the Biden administration agreed with the protesters that in, “the president’s view is that there’s a lot of passion, a lot of fear, a lot of sadness from many, many people across this country about what they saw in that leaked document.”

Even after the Kavanaugh assassination plot, there’s no sign that AG Garland or the DOJ intend to stop the harassment of conservative justices. While Democrats rant about “threats to democracy” from conservatives, conservative justices in the nation’s highest court have been forced to go into hiding at undisclosed locations for over a month.

That’s not America. It’s what a leftist banana republic looks like. And the message is quite clear. Even if the decision at the heart of the latest assault on the Supreme Court stands, justices are now all too aware that they will be forced from their homes and terrorized over their rulings, and the Biden administration and Attorney General Garland will wink at the intimidation because it is an inside job.

The same leftist activists and money machines helping elect Democrats are also backing the harassment campaigns against the Supreme Court. The Biden administration is not about to turn on its own activists, donors, and extreme base.

Had a conservative been caught trying to assassinate Sotomayor, Kagan, or Ketanji Brown Jackson, it would be the leading nationwide story instead of being buried by the latest gun control push, and would be accompanied by urgent warnings about the threat to democracy.

The media would have no difficulty connecting the dots between the assassination plot, conservative opposition, social media, and every Republican candidate, elected official, or just random voter. Before too long the FBI and the National Guard would be out in force while the skies over D.C. filled with drones and helicopters. Instead, a Supreme Court assassination plot gets buried on Page 7 and before long we’ll hear claims that the assassin was “mentally ill”.

Despite a formal condemnation of this latest incident, the Biden administration has shown little sign that it intends to restrain its political allies or hold them accountable for harassing justices.

Nor is it in their interest to do so.

Had Roske succeeded in assassinating Justice Kavanaugh, Biden would have another Supreme Court seat to fill. Whipping up the mob and then shrugging if one of them goes beyond intimidation to actual murder provides the administration with plausible deniability.

And the Left with the opportunity to claim another Supreme Court seat.