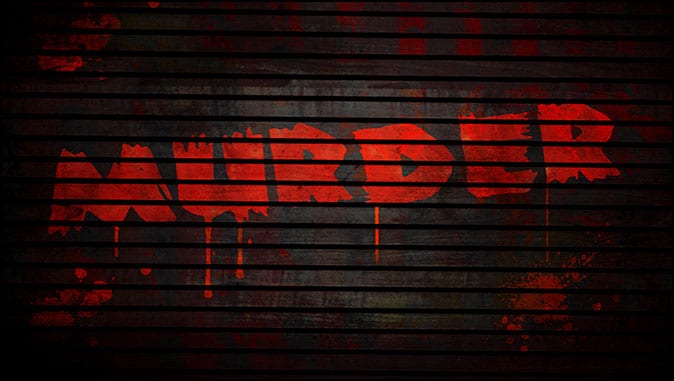 Chengyan Wang was cleaning up at the Shanghai Taste restaurant when a robber broke in. Wang tried to fight back and was shot 11 times. The officer on the scene in Las Vegas said that the Chinese waiter “was bleeding all over his body and appeared as if he was going to die.”

“I can still vividly remember when the first police officer on the scene immediately helped me stop the bleeding on my neck,” Wang recalled. “He was there the whole time encouraging me and making sure I stay awake and stay conscious and not fall asleep.”

Wang credits his “second chance in life” to “God’s grace.” And he fought back, not only against the criminals, but against the wealthy interests that enabled the murderous attack on him.

Rashawn Gaston-Anderson, the vicious thug who shot him, was only on the loose because a bail fund known as The Bail Project posted bond for him. The career criminal had been arrested a month earlier on weapons charges. In 48 hours he was arrested for burglary and larceny, and pled guilty to grand larceny while getting off with probation.

Wang came after The Bail Project, which had been backed by wealthy celebrities like Lizzo, John Legend, Danny Glover, Lil Nas X, Miss USA Asya Branch, Abbi Jacobson and Ilana Glazer of Broad City, Richard Branson, and others, suing it over what happened to him

The panicked pro-crime group responded by shutting down operations in Vegas. It however continues to aid and enable criminals around the country.

In St. Louis, the Bail Project bailed out a man after he beat his wife. That night, he beat her again resulting in “a broken eye socket, several broken ribs, and (bruises) from head to toe.”

Robin Steinberg, a key figure in pro-crime bail funds, insisted, “No one could have predicted this tragedy.”

Who could have predicted that freeing a man who beat his wife would lead him to kill her or that freeing criminals would lead to crime? There have been so many repeat incidents that the Bail Project has lost even the last tattered shreds of plausible deniability.

In Indianapolis, the Bail Project freed Marcus Garvin after he was arrested for stabbing a man. Garvin then stabbed Christie Holt and left her body to rot in a motel for a week before trying to dismember her. It freed Deonta Williams who then stabbed two cops in an ambush.

The Bail Project freed a thug who was facing drug and burglary charges. Lang then shot and killed Dylan McGinnis. Nikki Sterling, Dylan’s mother has become a crusader against bail funds, warning that, “This organization is bailing out violent offenders. These are not your misdemeanor charges. We are putting violent criminals back out on the street.”

The Bail Project is a 501(c)(3) nonprofit. That means that it’s really being subsidized by taxpayers. The $33 million in donations that poured into the pro-crime group in 2021, $19 million of which were used to bail out criminals, were treated as tax deductible contributions. Millions have gone tax free to free criminals and inflict horrors on ordinary people like these.

This was done in defiance of the tax code. And so it was the IRS that really enabled the near murder of Chengyan Wang, the brutal killing of Christie Holt and the murder of Dylan McGinnis.

Internal Radical Service by David Horowitz and John Perazzo, a pamphlet from the David Horowitz Freedom Center, had delved into the abuse of the tax code by radical nonprofits

IRS regulations specifically state that “exempt purposes may generally be equated with the public good, and violations of law are the antithesis of the public good”. They clearly lay out that, “violation of constitutionally valid laws is inconsistent with exemption under IRC 501(c)(3)” and that “planned activities that violate laws are not in furtherance of a charitable purpose”.

Was the shooting of Chengyan Wang really in the public good? If “violations of law are the antithesis of the public good”, how can setting violators loose be tax exempt?

The Bail Project is not alone.

Sex offender Christopher Don Boswell who was accused of sexual assault and kidnapping, and who had previously convicted in two previous sexual assault cases, got his $350,000 bail paid.

George Howard, accused of domestic abuse, was bailed out and a few weeks later allegedly shot and killed a Latino man driving on the I-94.

Other beneficiaries of the MFF’s pro-crime activities included a man who opened fire at police during the riots, and another who had weapons and drugs in his car.

Some of these cases became notorious because Kamala Harris had urged, “If you’re able to, chip in now to the @MNFreedomFund.” In the wake of violent Black Lives Matter race riots, celebrities like Seth Rogen, Steve Carrell, Don Cheadle and Cynthia Nixon, had poured money into MFF. And the IRS allowed the Minnesota Freedom Fund to operate as a 501(c)(3).

Does the IRS believe that freeing sex predators and murderers is in the “public good”.

There are currently bail funds in 37 states. The vast majority of them are also registered nonprofits that operate in defiance of the tax code with the complicity of the IRS.

And they are spreading pain, misery and taking countless lives.

In Seattle, 51-year-old Ivette Wallin became the first murder victim of 2023. Her alleged killer had been bailed out by the Northwest Community Bail Fund after he was involved in another domestic violence incident. The fund, which is another 501(c)(3), also bailed out a man facing gun charges who broke into a home and shot a father of four. The pro-crime fund bailed out a man accused of assault who then went out and stabbed a man to death in City Hall Park.

Bail fund organizers tend to argue that such horror stories are outliers, but local prosecutors found that the majority of those bailed out by the bail fund never showed up in court.

What exactly is the “public good” involved in keeping half of criminals from appearing in court?

That’s a question that the IRS should be made to answer.

In Portland, Mohamed Osman Adan, a Somali Muslim immigrant, with six domestic violence complaints, was bailed out by the Portland Freedom Fund.

Rachael Abraham, his girlfriend, had called the police after he beat, choked her, and struck her with Islamic ‘prayer beads’.

Adam allegedly kneeled on her throat and told her, “I should kill you”.

After the Portland Freedom Fund bailed him out, police found Rachael’s body covered in cuts with her blood soaking the carpet.

The PFF claims that there was no way that it could have known that a serial domestic abuser who was arrested for threatening to kill a woman would, if freed, finish the job. But statistics show that, like its Seattle counterpart, the majority of criminals it bailed out violated release agreements or didn’t show up in court. Others bailed out included “Malik Muhammad, a man later sentenced to 10 years in prison for throwing Molotov cocktails at police” along with others facing “serious charges including attempted murder, assault and strangulation”.

The PFF’s listed fiscal sponsor, the Northwest Alliance for Alternative Media and Education, is a 501(c)(3).

Perhaps someone can ask the IRS how Rachael’s murder or throwing Molotov cocktails at police serves the “public good” or what it has to do with “alternative media and education”.

The bail fund body count continues to pile up nationwide.

The Massachusetts Bail Fund freed a thug who had violently assaulted a police officer and been accused of assault and battery in Boston, who then went on to stab a 29-year-old woman to death. The Louisville Community Bail Fund and BLM bailed out an activist after he shot at a mayoral candidate. The Massachusetts Bail Fund is a 501(c)(3) while the Louisville Community Bail Fund’s fiscal sponsor is the Soros-funded Alliance for Global Justice: a 501(c)(3).

Does the IRS believe that shooting political candidates is a form of the “public good”?

While the IRS targets conservative organizations, pro-crime bail funds have unleashed a wave of terror across the country. Even in the few cases documented here, bail funds have led to ten murders, attempted murders, like those of Chengyan Wang, and numerous other crimes.

Bail funds have led to assaults on police officers, the murder of abused women and multiple killings of black people. These crimes were not only enabled by radical leftist administrators and donors, but by the IRS which has failed to enforce tax codes and treats them as nonprofits.

Ten people, white, Latino and black, male and female, young and old are dead because of it.

Say their names. Say them until the IRS does its job.