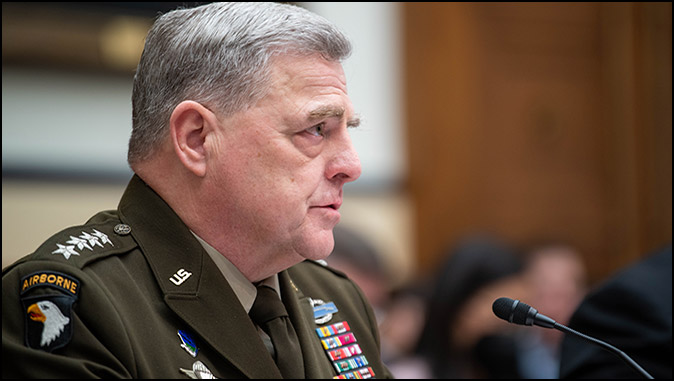 The Insurrection of General Milley
“Okay, I get it, it’s illegal, it’s wrong.”
By Daniel Greenfield

“The riots over the summer, you know, I could make a case that those riots were riots organic to an aggrieved community that perceived that they had various injustices throughout their life,” General Mark A Milley told the J6 Committee. “It was sheer, unmitigated anger that expressed itself in the form of mass violence and rioting. And, okay, I get it, it’s illegal, it’s wrong.”

The Chairman of the Joint Chiefs of Staff, who had previously justified the study of “white rage”, went on to defend the riots and the double standard at the heart of the J6 Committee.

The mobs assaulting police officers, burning flags, attacking federal buildings in sieges, like the one in Portland, reminiscent of Fort Sumter, and calling for the destruction of America under the guidance of an organization of “trained Marxists” demonstrated that it was an insurrection.

And Gen. Milley’s testimony showed that he sympathized with the insurrectionists.

An account had described Milley pointing to a bust of Lincoln during the Black Lives Matter riots and telling Trump, “That guy had an insurrection. What we have, Mr. President, is a protest.”

The J6 testimony provided an opportunity to dig into Milley’s definition of an insurrection.

On the one hand, Gen. Milley conceded that, “All the President has to do is walk outside the White House and yell three times, you know, ‘Insurrectionists, disperse.’ And he just has to yell it, right? And then he can do it, according to the law of 1807 or whatever year it was, right?”

But Gen. Milley along with other woke brass did everything possible to dissuade Trump from doing so. Using a report assembled by his subordinates, he argued that an insurrection should have “significant national security implications”, which he claims that massive nationwide riots that included attacks on federal buildings and the White House somehow did not.

There, as so often, Gen. Milley contradicted himself, mentioning that, “I don’t want to go into anything classified, but there were other countries exploiting some of this stuff.”

A mass insurrection by Marxists, black nationalist secessionists and other domestic terror groups exploited by enemy nations is the definition of a national security threat. Gen. Milley knows this because Russian plans during the Cold War had included such scenarios.

Using his report, Gen. Milley contended that, “fifteen hundred people rioting in three or four cities of America at a moment in time” did not qualify as an insurrection, but somehow J6 did.

Gen. Milley’s definition of an insurrection involves scope and scale, but there’s no metric under which the Black Lives Matter riots at their peak were smaller in scope than J6.

And yet, Milley cheerfully told the J6 Committee that he began taking a step that he doesn’t appear to have taken during the BLM riots, that “immediately following the 6th, I knew the significance, and I asked my staff, freeze all your records, collate them, get them collected up.”

Why did records involving a riot need to be classified?

“The document — I classified the document at the beginning of this process by telling my staff to gather up all the documents, freeze-frame everything, notes, everything and, you know, classify it. And we actually classified it at a pretty high level, and we put it on JWICS, the top secret stuff. It’s not that the substance is classified. It was I wanted to make sure that this stuff was only going to go people who appropriately needed to see it, like yourselves,” Gen. Milley admitted.

On his own initiative, the Chairman of the Joint Chiefs had classified documents involving a political incident, not because of any innate need, but to make sure that only the politically correct would gain access to them.

What’s in those documents? Whatever is there is meant ‘for leftist eyes only’.

Throughout his testimony, Gen. Milley insisted that he was only a public servant.

Gen. Milley was asked about the call involving Trump, during which Pelosi said, “‘You know he’s crazy, don’t you,’and she is reported to have said, General Milley, that you agreed with her.”

In his response, Gen. Milley appeared to confirm that he did so.

While the China phone call has been widely reported, Gen. Milley apparently placed “50 or 60” other phone calls to the Russians, the French, the Japanese and even the Islamic terror state of Qatar which is an ally of Iran and a key backer of the Muslim Brotherhood, to convey “stability”.

That is a very long chain of communication.

Gen. Milley claims to be deeply concerned about the Constitution and civilian control of the military, yet he repeatedly undermined the president, cabinet members and other civilian appointees for his own political agendas. Under the guise of being a good advisor, he initiated processes, like the political classification of materials, the double standard on riots or the phone calls that usurped the constitutional authority of the executive branch. And he’s still at it.

While belligerent in congressional hearings toward Republicans, Gen. Milley was pathetically eager to help along the J6 Committee right down to selectively classifying documents for political reasons. He decries the politicization of the military, yet everything he’s done has been to further shift the military leftward. His only resistance to leftist political pressure came when he tried to dissuade Rep. Schiff from proposals to recall and court martial General Flynn.

“I’ve become a lightning rod for the politicization of the military. And I am constantly strung out as an individual and also with Secretary Austin and others, the Chief of Naval Operations, the Sergeant Major of the Army. There’s a whole bunch of us that have been,” Gen. Milley complained.

Secretary of Defense Austin is a political appointee. Chief of Naval Operations Michael Gilday has been among the most aggressive in pushing racism and hatred for this country.

“Some of it is comments that I made in testimony about critical race theory and white rage,” Gen. Milley conceded. “Months of this constant drumbeat that is very damaging, in my view, personally, to the health of the Republic, because there is a deliberate attempt, in my view, to smear the general officer corps and the leaders of the military and to politicize the military… and I think that’s something that we need to avoid.”

Gen. Milley once again gets it backward. Military leaders like him have the obligation not to politicize the military. Civilians have a right to be critical of military leadership: especially when it stakes out political territory and takes sides.

Instead of acting to restore an apolitical military, Gen. Milley continues to help the Biden administration further politicize it while blaming retired officers and other critics of his actions.

“When 137 generals recently signed a letter that Secretary Austin and I are, you know, the worst thing since sliced bread and we’re lower than, you know, whale stuff and we should be court-martialed and treason and all that kind of stuff, all former retired flag officers — I will say, none of them were four-stars, though; we had a couple three-stars — that’s politicization,” he objected.

Retired officers are not politicizing the military when they express their opinions. Gen. Milley is politicizing the military when he states that, “if generals are out there writing editorials about politics, I think that’s an issue. If you want to be involved in politics as a general officer, retired general officer, or a retired commissioned officer, you ought to run for office.”

On Gen. Milley’s watch, active duty personnel have repeatedly been allowed to express leftist and even anti-American views, to clash with civilians on social media and berate journalists, even while any hint of criticism of the Biden administration has led to court martials.

Chairman of the Joint Chiefs of Staff Milley has used his position to, at worst, conduct and, at best, sign off on an insurrection that threatens the constitutional order he swore an oath to protect. The insurrection is cloaked in bureaucratic shenanigans like the selective classification, in providing misleading advice, using double standards and initiating treasonous actions.

Any serious investigation of the crimes committed in 2020 needs to begin with Gen. Milley.