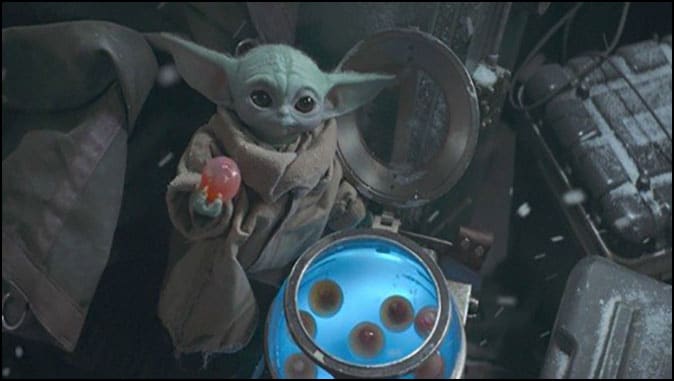 The Ideological Non-Sense and Hypocrisy of Leftists
By Laurie Higgins

One of the more grotesque demonstrations of leftist non-sense and hypocrisy was demonstrated a week ago following an episode of the wildly popular Disney show The Mandalorian when “Baby Yoda” eats the unfertilized eggs of a Frog Woman who is transporting her eggs to her husband so he can fertilize them thereby preventing their species’ imminent extinction. Fans of Baby Yoda freaked out, incensed at the lighthearted treatment of what they deemed genocide by the beloved Baby Yoda.

The moral incoherence and hypocrisy should be obvious. In the Upside Down where leftists live, when a human mother hires someone to dismember her own fertilized human egg—aka human fetus/embryo/baby—they demand that society affirm, celebrate, and shout the execution of those tiny humans. In fact, the voluntary dismemberment of fertilized human eggs at any gestational age is so morally innocuous and such an unmitigated public good that leftists think all Americans should pay for the executions of humans in utero.

In the Upside Down, the genocidal killing of all fertilized human eggs with Down Syndrome is at best morally neutral if not morally good, but the fictional devouring of unfertilized Frog Critters’ eggs is morally repugnant. Just wondering, if fertilized human eggs are parasites so devoid of personhood as to render them morally legitimate objects to kill, if it’s okay to dismember them because they’re imperfect non-persons, would there be anything wrong with eating their remains?

Leftists views on the slaughter of fertilized human eggs is just the most grotesque of their many morally incoherent views. Here are a few more:

Votes cast with paperless voting machines cannot be subjected to a manual recount, and so there is no way to determine the real election results if they are hacked. H.R. 1 … mandates paper ballots.

In order to detect hacks, this bill requires election bodies to conduct audits of all federal elections, regardless of how close the election, by employing statistically rigorous “risk-limiting audits.”

– Leftists condemn conservatives as “science-deniers” for disagreeing with them on the degree to which climate change is caused by human action or on how to respond to climate change. At the same time, the purported science-worshippers claim that men can menstruate, become pregnant, and “chestfeed,” and they claim that the product of conception between two persons is not a person. Anyone who refuses to concede to such nonsense is mocked, reviled, de-platformed, and fired. Just ask Harry Potter author J. K. Rowling or Wall Street Journal writer and author of Irreversible Damage, Abigail Shrier.

– Leftists claim that marriage has no connection to either sexual differentiation or reproductive potential. They vociferously claim that marriage is solely constituted by love, and that “love is love.” And yet most leftists don’t think two brothers in a consensual loving relationship should be able to legally marry.

– Leftists claim there’s no story behind or within Hunter Biden’s emails and texts that prove Joe Biden straight up lied to the American public, and yet they claimed there was a story of such magnitude and enormity within Christopher Steele’s imaginative “dossier,” that it necessitated 24-hour coverage for years.

– Leftists claim that eliminating the Electoral College and filibuster and packing the U.S. Supreme Court constitute necessary changes to enhance “democracy,” but implementing legal processes to ensure an election was fair undermines democracy.

– Serial killer of senior citizens, Andrew “Quietus” Cuomo, commands citizens to “admit” their “mistakes” and “shortcomings” with regard to how they responded to the Chinese Communist virus even as he refuses to apologize for his policies that killed scores of elderly.

– To leftists, social science is the god that determines all moral truth, and yet despite social science demonstrating repeatedly that children—especially boys—need fathers, the left refuses to discuss how fatherless families may be contributing to the anti-social behavior that is destroying our cities.

– Leftists claim to value free speech, religious liberty, inclusivity, diversity, tolerance, and unity while condemning not just the beliefs of those with whom they disagree, but also the persons themselves. Many leftists share an uncharitable, presumptuous, ugly, tyrannical, oppressive, and scary desire that those who believe homosexual acts are immoral, who believe marriage has an ontology, who believe biological sex is immutable and meaningful, and who believe bodily damage and disfigurement are improper treatment protocols for gender dysphoria should be unable to work anywhere in America.

To create the illusion that they’re not hypocrites and to defend their intolerance, exclusion, divisiveness, hatred of persons, book banning, speech suppression, demand for ideological uniformity, and efforts to circumscribe the exercise of religion—which for Christians extends far outside the church walls—leftists resort to fallacious reasoning. The fallacies they employ are too numerous to list, but two of their faves are the ad hominem fallacy and the fallacy of circular reasoning.

Ad hominem is an informal fallacy in which an irrelevant personal attack replaces a logical argument. It proves nothing about the soundness, truth, or falsity of a claim. Instead it appeals to emotion and silences debate through intimidation.

The fallacy of circular reasoning occurs when the conclusion presumes the premise (i.e., the initial claim) is true without proving it true. So, for example, leftists–ignoring their purported commitment to the First Amendment–argue that homosexual acts are moral acts and, therefore, there is no need to tolerate the expression of dissenting views. But the intolerance they are trying to defend is based on the truth of their premise that homosexual acts are moral—a premise they simply assume without proving is true.

After employing fallacious circular reasoning and hurling ad hominem epithets at their opponents, leftists sanctimoniously wipe the dust off their dirty hands and assert that their hypocrisy isn’t really hypocrisy after all.

MassResistance: How to deal with left-wing “counter-protesters” who come and harass pro-family demonstrations and events

MassResistance: How to deal with left-wing “counter-protesters” who come and harass pro-family demonstrations and events…

The US and the UN Nuclear Inspectors Must Stop Appeasing Iran