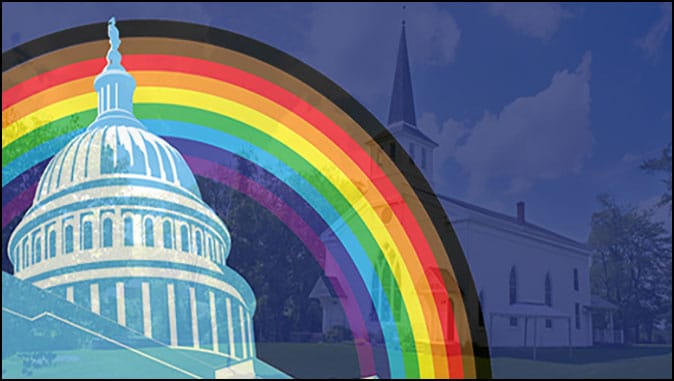 As I have long argued, the greatest threat posed to our First Amendment assembly, speech, and religious free exercise protections comes from the homosexual community and the “trans” cult. Already state laws and judicial decisions have been eroding those protections, and last Thursday, the most dangerous threat yet emerged in Congress when U.S. Representative David Cicilline (D-RI) re-introduced the deceitfully titled “Equality Act,” which explicitly neuters religious protections when religious beliefs conflict with disordered sexual desires.

The Equality Act (H.R. 5) would add “sexual orientation” (i.e., homosexuality) and “gender identity” (i.e., cross-sex impersonation) to the current list of bases on which discrimination is prohibited in the Civil Rights Act of 1964. Doing so is a means of abrogating 1. the right of free people to express moral judgments about volitional acts, 2. the right of people of faith to exercise their religion freely with regard to beliefs on sexuality, and 3. the right to recognize the scientific reality of sex differences in those places where sex differences matter most.

When leftists say that the Equality Act will protect “LGBTQ” persons from discrimination, they mean the Equality Act will prohibit conservative people from making decisions in accordance with their beliefs—including religious beliefs—about marriage, volitional sexual acts, and cross-sex impersonation. In other words, if the Equality Act passes, a new protected class based on or constituted by disordered subjective sexual feelings will be created and our first freedom will be abrogated.

The Equality Act, which has 223 co-sponsors—all Democrats—is supposed to be voted on this week after which it will move to the U.S. Senate. President Biden is urging Congress to pass it with all due haste, so he—the self-identifying Catholic—can sign into law the bill that will undermine religious protections for Catholics and Protestants.

The Equality Act makes clear the sweeping nature of the cultural changes leftists seek to impose via federal legislation.

Lesbian, gay, bisexual, transgender, and queer … people commonly experience discrimination in securing access to public accommodations—including … senior centers … health care facilities, shelters … youth service providers including adoption and foster care providers. … Forms of discrimination include the exclusion and denial of entry, unequal or unfair treatment. … (with respect to gender identity) an individual shall not be denied access to a shared facility, including a restroom, a locker room, and a dressing room, that is in accordance with the individual’s gender identity.

If this legislation passes, no senior center, health care facility, shelter, or adoption agency that partners with the federal government or receives federal money will be permitted to treat biological men who pretend to be women as men.

Shelters, senior centers, and hospitals with sex-segregated restrooms, showers, or sleeping quarters will be forced to sexually integrate those private spaces.

Catholic hospitals will be forced to perform surgical mutilations on men and women who seek to pass as the sex they are not.

Christian adoption and foster care providers will be forced to place infants, children, and teens in the homes of homosexuals and cross-sex impersonators.

Teachers in government schools will be forced to facilitate delusional “trans”-cultic beliefs and practices. Administrators, faculty, and staff will be required by law to use incorrect pronouns, which constitutes bearing false witness. And locker room supervisors will be forced to oversee students of the opposite sex undressing.

The Equality Act poses some as of yet unacknowledged ideological and pragmatic problems for Democrats. For example, on the same day Cicilline reintroduced the Equality Act, U.S. Representative Grace Meng (D-NY) reintroduced her bill that seeks to protect girls and women in refugee camp bathrooms. Meng explained,

Refugee camps should be safe havens for those who have been forced to flee their countries and that includes secure facilities for restrooms. … But unfortunately, many bathrooms in refugee camps do not provide appropriate safety protections. Many refugee camps lack adequate access to such facilities and often times the restrooms are mixed-sex, public, and without locks. … These conditions create a lack of privacy and dignity and make women and girls afraid to use the restrooms, fearing that they may be assaulted and subjected to violence while using the bathroom. These types of conditions are unacceptable. Nobody should have their safety jeopardized in order care for their most basic hygiene needs. My bill would finally combat this problem. (emphasis added)

A single instance of discrimination may have more than one basis. For example, discrimination against a married same-sex couple could be based on the sex stereotype that marriage should only be between heterosexual couples, the sexual orientation of the two individuals in the couple, or both.

Leftists define the belief that marriage is the union of two people of opposite sexes as a discriminatory “sex stereotype,” and they want to legally prohibit every American from acting in accordance with that belief. Of course, the leftist opinion that the cross-cultural and historical understanding of marriage is a discriminatory sex stereotype is neither an objective fact nor true. It is an ideological assumption.

As an end run around the First Amendment’s religious protection, the anti-constitutional, anti-liberty, anti-Christian, perversity-supremacy law—misnamed the Equality Act—states,

The Religious Freedom Restoration Act of 1993 … shall not provide a claim concerning, or a defense to a claim under, a covered title, or provide a basis for challenging the application or enforcement of a covered title.

As I wrote two years ago,

The Equality Act would require that federal law recognize disordered subjective feelings and deviant behaviors as protected characteristics. Federal law would absurdly recognize homoeroticism and cross-sex masquerading as conditions that must be treated like race and biological sex, which are objective, 100 percent heritable conditions that are in all cases immutable, and carry no behavioral implications.

Once the law is enjoined to protect two groups based on their subjective sexual feelings and volitional sexual behaviors, we open a Pandora’s Box of evils that will inevitably result in conflicts between the new legal rights of those who embrace sexual deviance as “identity” and 1. the First Amendment rights of those who reject sexual deviance, 2. the moral right of businesses to require restrooms, locker rooms, and showers to correspond to biological sex, 3. the right of businesses to fire or refuse to hire a person who chooses to masquerade as the opposite sex, and 4. the right of public schools to fire or to refuse to hire a person who chooses to impersonate the opposite sex.

If the Equality Act passes, all it will take for other groups to have their sexual peccadillos deemed “sexual orientations,” is to organize and wait for the culture to do its dirty work.

Then the “arts,” will join in writing plays, novels, Hollywood scripts, and heartstring-pulling songs affirming all sorts of perverse sexual fetishes as authentic “identities.”

Next our polluted and politicized professional mental health and medical communities will manufacture “social science” studies to show how much happier polyamorists are when they are free to live in poly-pods without shaming judgments; and that brothers in love should be permitted to marry (after all, love is love); and that adults who identify as babies should be free to wear onesies to work in order to be their authentic selves, after which all of society will be forced to ask our friends, neighbors, co-workers, and students what their preferred age is.

Christians will be legally prohibited from acting on their moral judgments about sexual perversion, and dissenters will be “othered,” cancelled, and shamed. Soon Christian-shaming will be the only shaming permitted in this brave new world where shame is unmoored from morality.

Americans are a tolerant and patient people, but their capacity for tolerating unjust oppression and suppression of their most fundamental rights is not unlimited. I suspect Pelosi, Schumer et al. realize that. I suspect they know that the radical anti-American, anti-liberty, anti-Constitution, anti-Christianity, Big Brother-esque agenda they have planned for Americans in the next four years may spark a rebellion. Hence the razor-topped wall surrounding the “people’s” house.

But, razor-topped barbed wire cannot keep standing a house divided against itself.

Take ACTION: Click HERE to send a message to your U.S. Representative to urge him/her to oppose the federal Equality Act (H.R. 5) which seeks to amend the Civil Rights Act of 1964 to include protections for an individual’s perceived sex, “sexual orientation,” or “gender identity.” If you know the name of your local official, you can also call the U.S. Capitol switchboard at (202) 224-3121 and ask the operator to connect you with his/her office to leave a message.