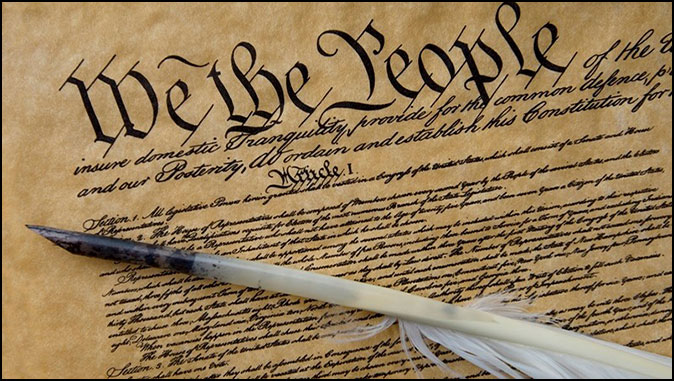 The Durability of the U.S. Constitution
By Dr. Jerry Newcombe

“The American Constitution is, so far as I can see, the most wonderful work ever struck off at a given time by the brain and purpose of man.” So said 19th century British Prime Minister Sir William Gladstone.

September 17 marks the 233rd anniversary of the signing of the U. S. Constitution.

But some in our society might wonder – hasn’t this musty old document outlived its usefulness? Isn’t it arcane and irrelevant? Just the product of a bunch of rich white guys, and some of them were slave-owners. But, of course, the Constitution contained within the means by which slavery could one day be abolished. And it was.

Nonetheless, many today think the Constitution is out of date.

Billionaire George Soros has funded many attempts which, to put it gently, have frayed the edges of the Constitution.

In their 2010 book exposing George Soros, The Shadow Party, authors David Horowitz and Richard Poe tell of one such Soros attempt against the Constitution. The radical billionaire funded a symposium at Yale Law School in 2005, with the express purpose of initiating a fundamental transformation of the Constitution by this present year.

Horowitz and Poe note, “Yale Law School hosted a conference called, ‘The Constitution in 2020,’ promoted as an effort to produce ‘a progressive vision of what the Constitution ought to be.’” They opine, “We might think of it as a Shadow Constitutional Convention.” At the conference, participants referred repeatedly to the “evolutionary character of constitutional law.”

The WEEKLY STANDARD said of the Yale conference: “The left makes no secret of its intentions where the Constitution is concerned. It wants to change it…freeing [the left] from the tiresome necessity of winning elections…The new, improved Constitution will come about through judicial re-interpretation.”

Will the Constitution endure – even through all the various assaults on it, including bouts of judicial activism?

Well, it has endured all these years, including during the U. S. Civil War. I believe the answer is yes, with the right actions by “we the people.”

I think the reason it has endured all these years has to do with Christianity. The Constitution benefited greatly from the Christian worldview that was held by the majority of the founders, even those who might not have believed in Jesus as their personal Savior and Lord.

Law professor and prolific author John Eidsmoe wrote a seminal book on the 200th anniversary of our key founding document, Christianity and the Constitution.

In a television interview on our nation’s Christian roots, Eidsmoe told me,

“When you look to that constitutional convention, those fifty-five delegates, we find that, contrary to what is commonly being taught today, the overwhelming majority were actively affiliated with Christian churches. Twenty-seven of them were members of the Church of England or the Anglican Church, an orthodox church in those days with a Calvinist confession, the Thirty-Nine Articles. About seven of them were Presbyterian Calvinists, about the same number were Congregationalist Puritans, again Calvinists, two of them were Dutch Reformed, two of them were Lutheran with a very similar theology in most ways. There were two Methodists, two Roman Catholics, one who we just don’t know for sure what his religious beliefs were, and that leaves maybe about three or four that you would call unorthodox in their religious beliefs. That’s a very small minority: it’s about six percent.”

Where did Madison learn such wisdom? Madison, a key architect of the Constitution and one of its biggest champions, was schooled at what is today Princeton. He studied under its president, Rev. John Witherspoon, a confirmed Calvinist who came from Scotland.

When Madison said things like, “All men having power ought not to be trusted,” he was echoing what he learned so well from his mentor Witherspoon. Eidsmoe points out that Witherspoon was the founding father who trained so many other founding fathers in a Christian worldview. He taught about 20 key founding fathers at Princeton.

In contrast to failed forms of government that always exalt man’s nature, the U. S. Constitution stands for the rule of law. By assuming the worst about human nature, it has brought about the best in men. As has been said, we are a nation of laws and not of men. Its Christian foundation explains the durability of the Constitution.