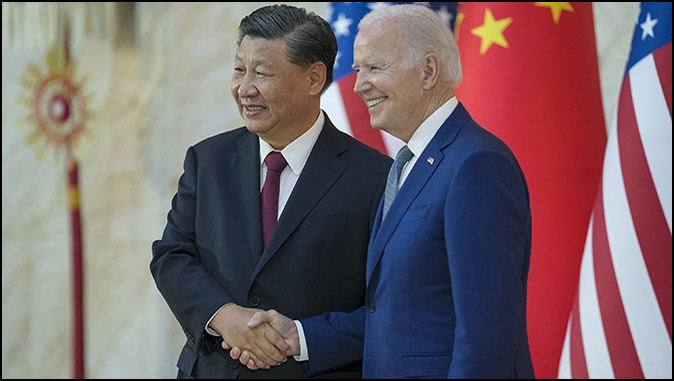 The Diplomacy Delusion
When fools cling to fantasies about the powers of persuasion.
By Bruce Thornton

President Biden recently met with China’s Xi Jinping in Indonesia. As Gordon Chang reported for the Gatestone Institute, Biden’s goals for the meeting was to “lay out” each power’s “red lines” and “critical national interests,” and determine “whether or not they conflict with one another. And if they do, how to resolve it and how to work it out.” As usual with such diplomatic theater, nothing of substance was discussed, and tired bromides about “working together” and “candid exchange of views” were exchanged.

The assumptions behind Biden’s statement of the goals themselves reveal the dangerous flaws and delusional thinking that define the fetish of “diplomatic engagement,” which for a century has been the heart of the “new world order.” Ancient common sense and the sorry record of failed diplomacy should have long ago disabused us of this feckless idealism and reliance on “parchment barriers,” negotiated written agreements that almost always lack a robust, credible threat of force to punish violators.

Many of the problems that vitiate the recent talk with China have troubled diplomatic engagement for a century. In the case of China, Chang writes, for decades “of fruitless conversations with China, American presidents regularly postpone taking needed action.” Thus, like other talks with rivals and malignant enemies like North Korea and Iran, such talks produce “horrible results,” and allow our enemies “to buy time and often run out the clock”––just as North Korea did to create nuclear weapons, and Iran is currently doing to achieve the same end.

Moreover, such talks with the world’s most consequential power inflate China’s already arrogant sense of superiority, as well as our own weakness. Such a dynamic only encourages more aggression. Finally, these agreements, which usually lack a serious enforcement mechanism for punishing violations, are what Thomas Hobbes nearly four centuries ago called a “covenant without the sword,” mere “words of no strength to secure a man at all.”

Yet Biden has gone beyond just talking without acting. His recently promulgated 2022 Nuclear Posture Review, the Wall Street Journal writes, says that “the Biden Team will cancel the nuclear sea-launched cruise missile, known as SLCM-N, which is a planned smaller ‘tactical’ nuke that could be launched from U.S. Navy ships or submarines.”

This decision is being made in spite of Iran’s expansion of its missile arsenal, and China’s and Russia’s build-up of tactical nuclear weapon stockpiles that threaten our security and that of our allies. As a result, as Admiral Charles Richard, commander of U.S. Strategic Command, puts it, “The current situation in Ukraine and China’s nuclear trajectory convinces me a deterrence and assurance gap exists.” Indeed, “By the 2030s,” the Posture Review notes, “the United States will, for the first time in its history, face two major nuclear powers as strategic competitors and potential adversaries.”

In other words, we are not just failing to act, but taking actions that increase our enemies’ ability to threaten our security and interests. Why? Often, we do so because we lose our nerve and do not want to pay the price in lives and resources to stop an aggressor before he becomes capable of carrying out his designs. Not wanting to face the risks of using force, we then indulge in the theater of “diplomatic engagement,” creating the illusion of action to hide our unwillingness to act.

The dangerous fallacy of diplomacy and agreements has been recognized ever since Homer’s Iliad 2700 years ago. In Book 20, Hector stands before the walls of Troy, awaiting Achilles, who has slaughtered and routed Troy’s army. Knowing that he is fated to die at the hands of Achilles, Hector still hopes that maybe he could negotiate with the rampaging killing-machine. He considers disarming himself and negotiating with Achilles, promising to return Helen and pay a huge indemnity.

But common sense wakes him up: “Why thrash things out? I must not go and implore him. He’ll show me no mercy, nor respect for me, my rights––he’ll cut me down straight off––stripped of my defenses like a woman once I have loosed the armor of my body.” Yet despite this moment of clarity about the inhuman ferocity of Achilles, he still tries to bargain with him over the treatment of his body should he be killed, asking that his corpse be returned to his family.

Achilles responds with the eternal truth that no negotiations with an enemy committed to the destruction of his foe can succeed: “Don’t talk to me of pacts. There are no binding oaths between men and lions––wolves and lambs can enjoy no meeting of the minds––they are all bent on hating each other to the death. So with you and me. No love between us. No truce till one or the other falls and gluts with blood Ares,” the god of war.

We moderns, of course, consider such brutal realism to be typical of an ancient savagery and ignorance that we have progressed beyond. War for us is an anomaly to be done away with by a “rule-based international order” that settles conflicts between states with negotiation and covenants.

But think about the horrors of the 20th Century’s two world wars, when the world’s most civilized peoples slaughtered each other in the millions with artillery shells weighing half a ton, machine guns and tanks, poison gas, aerial bombardment of cities with high explosives and incendiary bombs, and ultimately nuclear weapons. In those two conflicts the combatants behaved just as Achilles describes all sworn enemies do. Only when the aggressors and their cities had been obliterated and “glutted Ares with blood,” could peace and reconciliation be possible.

It’s not just the common sense and realism of the sort we find in Homer that teaches us that negotiating and signing pacts with inveterate enemies who hate us will put us in danger. History also provides empirical evidence for that truth. The September, 1939, meeting in Munich between Neville Chamberlain and Adolf Hitler is the poster-boy for feckless appeasement. But “diplomatic engagement” is the father of appeasement, the desperate recourse of leaders and their peoples who have no stomach for war.

The misjudgment of Hitler and Nazism also paved the way for Chamberlain’s doomed effort. Hitler’s public proclamations of his revanchist intentions during the party rallies in Nuremburg and in his manifesto Mein Kampf were no secret. Neither was the anti-Semitic race-laws and the occupation of Austria. Nor did the British heed the analyses from Sir Horace Rumbold, England’s ambassador to Germany when Hitler came to power, who reported to the government the enthusiasm with which the German people received Hitler’s scorn for pacifism, paeans to “Will and determination” which are “of the highest worth,” and his belief that “only brute force can ensure the survival of the race.”

Yet Chamberlain, like many British still traumatized by the slaughter of the Great War, clung to his faith in his powers of persuasion, and the desire of the Germans to seek peace. He seemingly paid no attention to Winston Churchill’s BBC broadcast four years earlier that warned of the existential threat of Germans “who are being taught from childhood to think of war and conquest as a glorious exercise and death in battle as the noblest fate of man,” a nation “in the grip of a group of ruthless men preaching a gospel of intolerance and pride,” who are “rearming with the utmost speed, and ready to their hands this new lamentable weapon of the air” imperiling civilians of all ages.

In other words, Chamberlain missed what Churchill understood: that Nazi Germany was as different from liberal democracies as a lion is from a man, or a wolf from a sheep. There could be no negotiated covenants with such a regime, no “meeting of the minds” upon which agreements and pacts must be based. In the end, brutal force destroyed the Nazi regime at the cost of at least 75 million people, including 40 million civilians.

Yet despite this lesson of history, we have continued for decades to use diplomacy to turn lions into men by entering into “covenants without swords.” As a result, we now face an Iran, China, and Russia armed with the latest drones and missiles, including China’s 1250 hypersonic weapons that can reach our military bases and Carrier Battle Groups anywhere in the world.

Continuing to indulge the illusion of “diplomatic engagement” is the highest form of political malfeasance, for keeping citizens safe is the most important duty of the federal government. No matter how loudly the dogs of diplomacy barked in Indonesia, the Chinese caravans of aggression will relentlessly move on.