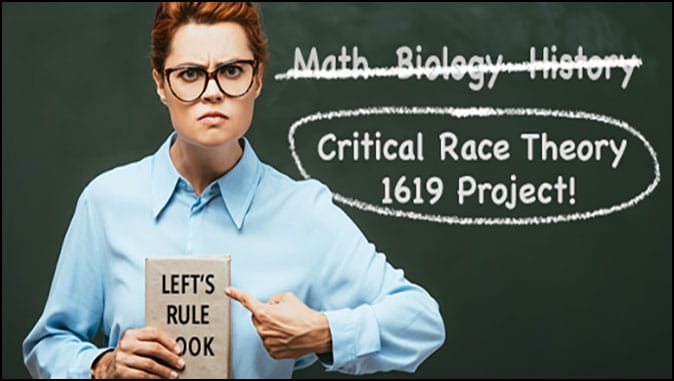 The Coming Revolution: The Left’s Destructive Plan for Teachers
By Kristi Shaffer

Schools are filled with teachers that want the best for their students. However, in recent days schools have become a political bastion for the leftist agenda. Although some teachers and the teachers’ unions have become warriors for the leftist agenda, others are fighting, upholding standards as the last vestige of conservative Judeo-Christian values slips from the public school system. Many parents have become familiar with the idea of Critical Race Theory, also known as CRT, and recognize the harm it causes to their children. However, what is not recognized is that they are coming for the teachers next. Teachers refusing adherence to the policies of CRT, the NEA, and the teacher’s unions are soon targeted, not unlike the events that occurred during the Chinese Cultural Revolution.

Recently, Xi Van Fleet of Leesburg, Virginia, made several comments at a school board meeting for the Loudoun County school district, describing herself as a survivor of the Chinese Communist regime under the control of Mao Zedong. She expressed her concern over the grooming of children into social justice warriors and the rhetoric used in China now appearing in the public schools within the United States. Her concerns regarding the indoctrination of students are warranted. What is needed too is a thorough discussion of exactly how CRT will affect teachers that refuse to promote Marxism.

Parents and educators will only understand what is coming by understanding how Marxist and other totalitarian leaders treated educators in the past. In the Cultural Revolution that Xi Van Fleet survived, a movement known as the Red August of 1966 changed education dramatically. Chairman Mao Zedong, paranoid following the failures of the Great Leap and fearing members of his own party, called for the elimination of religion, traditions, and the educators teaching those traditions. He recruited youth starting in colleges but then extended the program to high school and middle school children. The student group was known as the Red Guard. The Red Guard, made up primarily of teenagers, quickly became the militant arm of the Maoist regime. Leaders told students to report any individual not following the Chinese Communist Party (CCP) and their philosophies. Violators faced public humiliation and beatings by their students. Many were murdered.

Although physical violence is unlikely here in the United States, character assassinations started this spring. In New York City, private school teacher Paul Rossi was fired after expressing his concerns with CRT and the division of Zoom meetings by race. In Chicago, Palatine High School terminated teacher Jeanne Hedgepeth for comments she made on her personal social media accounts. She is now in the process of suing the school district for violating her First Amendment rights.

A Portland teacher, Katherine Watkins, who supports the teaching of CRT, recently claimed that teachers refusing to teach CRT are akin to pedophiles, actions warranting dismissal for abuse. So, we see the labeling and name-calling have already begun. Teachers are losing jobs and reputations as they oppose the leftist agenda of indoctrination. It will not end with name-calling and job loss. Cancel culture ensures every area of the individual’s life is annihilated simply for disagreeing with the regime.

The teacher’s unions jumped on the bandwagon as well. The American Federation of Teachers (AFT) President Randi Weingarten has promised a fund of $2.5 million for the legal defense of any teacher that uses CRT in the classroom in states where the theory is banned. Will the teacher’s unions defend the rights of teachers who oppose CRT? That is highly unlikely. Weingarten has compared those opposed to CRT to Holocaust deniers.

Parents, conservative teachers, and Christian leaders must come together if there is any hope of defeating the leftist onslaught against our students and their teachers. Sacrifices must be made, forcing teachers into leaving behind good paying public-school positions, teaching instead in the less lucrative private school setting. It may mean parents removing their children from government schools and paying tuition in private schools or transitioning to homeschooling. Some should give up their time, money, and privacy to run for a school board. It is time to be involved, attend school board meetings, join the PTA, and make your voices heard. Your teachers need your support and your resolve. Most importantly, teachers must resolutely teach the truth even as the new Red Guard of the NEA seeks to humiliate them and cancel their employment.

The Google Cult’s Sex Abuse and Mandatory Abortions “I was fired from my team...because I…

What’s Wrong With the Brits?

What’s Wrong With the Brits? Six years after the Brexit vote, Britain is still drifting…