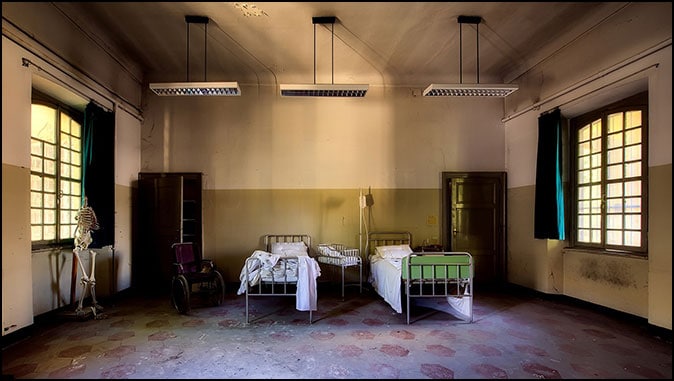 The Bidens Got Into the Hospital Business and People Died
There wasn’t enough money for medication, tests, or sterilizing instruments, but lots of money for the Bidens.
By Daniel Greenfield

The old slogan, “The Best of Care” can still be found on Ellwood City Medical Center’s old promotional materials. When the pandemic began, the old rural Rust Belt country where President Trump beat Hillary Clinton could have used a hospital. Any hospital.

There was even talk of reopening the defunct hospital again to treat coronavirus patients.

But, like so much in Pennsylvania, the Ellwood City Medical Center never recovered from the Democrats. The FBI raided it in January and the hospital lost its license next month. Not that it mattered at that point because the hospital had already been shut down since December.

Despite that, the hospital managed to score $1.8 million in coronavirus relief funds.

With no hospital, local residents face a trip if they’re injured. And if the injury is bad enough, they might not survive. The closed hospital in Pennsylvania is just another piece of the Biden legacy.

In the three years since Americore CEO Grant White was allegedly introduced by James Biden to Joe Biden at a fundraiser for the Beau Biden Foundation, a charity co-chaired by Hunter Biden whose laptop bearing the foundation’s sticker is at the center of a new scandal, there have been lawsuits, an FBI raid, and investigations in different cities and states.

“James Biden mentioned that his brother’s connections to labor unions and the Department of Veterans Affairs would help DMM expand its model nationwide,” a lawsuit filed by one company claims.

White would later claim that Biden told him, “there’s not a single door in the country that we can’t open.”

James Biden, Joe’s brother, had become a principal at Americore whose business model was based on buying and turning around rural hospitals. But the turnaround was into the grave.

Obamacare had hit rural hospitals hard, forcing many of them to shut down. By Obama’s last year in office, 4% of rural hospitals had closed down, and hundreds more were on the brink. And the Bidens had figured out a way to profit from the devastation caused by Obama-Biden.

After Americore took over the Ellwood City Medical Center, it racked up over 40 citations from the Department of Health. Cardiovascular services were cut, the wound unit was closed, and access to its MRI machines was sidelined.

In 2018, James Biden was renovating his Americore office and demanding expensive furniture as part of an office that was described as a “little shrine to him and his brother and Obama.”

Utilities threatened to turn off the gas and the water at Ellwood. Instruments weren’t being sterilized because there was no equipment, and the hospital couldn’t even afford to order tests.

Things got so bad at the hospital that hazardous waste was just piling up in garbage bags.

Hospital patients might have been able to get basic care and supplies, but the money wasn’t there. Meanwhile, James Biden had allegedly made off with $650,000.

According to the Americore CEO, “Jim Biden directed me to loan him approximately $400,000 of this money for him to use to repay a past-due personal loan.”

That was in January 2018. By the summer, Ellwood was closing departments, and by the fall, it couldn’t pay its power or gas bill. Meanwhile Biden only allegedly paid back $25,000.

James Biden had promised that the money would be coming from the Muslim world.

Biden and his partners had allegedly gone to the Qatar Investment Authority, the Islamic terror state that acts as the patron for the Muslim Brotherhood, controls Al Jazeera, whose royal family had ties to the mastermind of 9/11, and which is allied with Iran, for money for Americore.

But Qatar didn’t pay up and James Biden and his partners denied ever taking the meeting. The Americore CEO claims he was told that President Trump’s sanctions on Iran blocked the deal.

The former Americore CEO also claims to have met with Hunter and James Biden at a meeting that looked for ways to raise money from China.

“We’ve got people all around the world who want to invest in Joe Biden,” James Biden had once boasted. There’s no denying that. How else could a college dropout and failed nightclub owner be in demand around the world, or help score a billion dollar contract to build homes in Iraq?

Together James and Hunter Biden had built a business around Joe Biden. But what happened in Pennsylvania, in St. Louis, and Arkansas ended with more than greed.

St. Alexius Hospital in St. Louis had become famous as the scene of a forties exorcism that had inspired the novel and the movie, The Exorcist, but there was no one to exorcise the Bidens.

The famous hospital is another of the failed Americore properties and as it crawled agonizingly through bankruptcy, “two preventable deaths” were among the casualties. Like Ellwood, St. Alexius had to cut patient care, sacrificing its operating room, and its wound care clinic.

The hospital’s nursing school shut down and the facility was down to four contracted nurses and was operating at a fraction of its capacity.

The victims of the disaster were the largely black residents of the south St. Louis neighborhood.

St. Alexius, which began as a Catholic hospital in 1828, is now being used to house the homeless, and its bankruptcy sale has been stalled because of a state investigation triggered by an “immediate patient jeopardy” tag.

In Izard County, Arkansas, the only hospital in the county, listed as a critical access hospital, is also on the chopping block.

“We have difficulty in securing pharmaceuticals simply because of lack of money,” a doctor at the hospital warned.

Last year, two medical firms sued, among others, James Biden, claiming that, “millions of dollars in funds may have been taken by these defendants outside of the ordinary course of business.”

One of the men claimed that James Biden had promised to sell the plan to the White House. Instead Biden accidentally texted him a plan to defraud him even as Biden’s partner was encouraging him to make up numbers to defraud a Turkish company.

Another partner was promised that their “model would be used by Joe Biden as part of his campaign.”

The “investment capital originating from and flowing through foreign entities” did not materialize, neither did Biden’s alleged promise that the company’s model “would play an integral role in health care policy at the highest levels of the United States government.”

When there were concerns about the government, the message was, “Jim told me. Don’t worry every time someone threatens to sue you you’re with us now nobody is gonna touch You,”

After they sued Biden and his partners, they received an envelope filled with “blood-stained currency from a Middle Eastern country” linked to terrorists and a “torture ticket” resulting in an FBI investigation.

But the real price is being paid in Ellwood City, in St. Louis, and Izard County.

Joe Biden has run on a promise to tackle the pandemic. But when coronavirus cases shot up 40% in Lawrence County over the summer, the Ellwood City Medical Center wasn’t there.

New cases have been rising sharply in Izard County and in St. Louis, there is one hospital less able to help and treat the sick.

“All the promises were on the Biden name,” one of the men James Biden dealt with said.

James Biden has moved on and as his brother aspires to the White House, has no doubt found new investors who “who want to invest in Joe Biden”, but in a place without a hospital, no one can move on. And when Election Day comes to Pennsylvania, that’s one place Biden won’t win.

The next time Joe Biden promises to fix healthcare, he can start in Ellwood City.